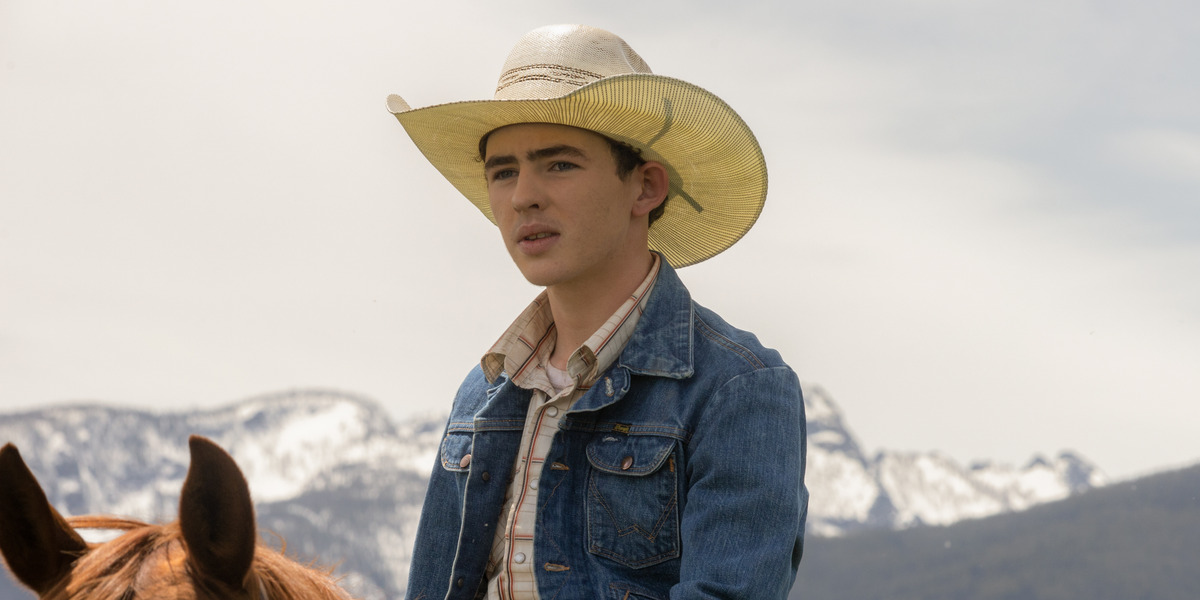 ‘Yellowstone‘ season 5 takes viewers back to Montana, the home of the Yellowstone Ranch. However, as with every season, some things have changed at the ranch. One of the biggest surprises in the fifth season is the development of Carter’s character. The teenager appears drastically different from the previous season and has gotten a serious glow-up. Such is the drastic change in Carter’s appearance that viewers must be wondering if the actor essaying the role has changed. If you wish to find out who plays Carter in ‘Yellowstone’ and how old he is in the fifth season, here is everything you need to know! SPOILERS AHEAD!

Carter is introduced in the fourth season premiere episode, titled ‘Half the Money.’ He is a troubled young boy Beth meets outside the hospital while checking up on John, who is in a coma. Carter reveals that his mother passed a while ago, and his father recently died from a heroin overdose. Beth feels bad for the boy and decides to take him to the Yellowstone Dutton Ranch. As the narrative progresses, Carter forms a bond with Rip and Beth, who become his adoptive parents. Carter also catches John Dutton’s eye and receives horseriding lessons from the Dutton patriarch.

In the series, actor Finn Little essays the role of Carter. Little hails from Australia and was born in Brisbane on June 9, 2006. After making a few appearances in short films, Little made his television debut with the crime drama show ‘Tidelands.’ He also appears as the titular character in the critically acclaimed film ‘Storm Boy,’ directed by Shawn Seet. However, Little is arguably best known for playing the part of Connor in the Western drama film ‘Those Who Wish Me Dead.’ The movie stars Angelina Jolie in the lead role and is directed by ‘Yellowstone’ creator Taylor Sheridan. Little is credited as a series regular for the fourth and fifth seasons of ‘Yellowstone.’

How Old Is Carter in Season 5?

In the series’ fifth season, Carter is no longer the bubbling child we met in the previous season. He is significantly grown up and now appears as a handsome young man in his late teens. Therefore, viewers must be wondering about the boy’s age. While the series does not confirm Carter’s age, he is likely between thirteen and fourteen when Beth first meets him.

Assuming a year passes during the events of season 4, Carter is close to fifteen years old at the end of season 4. With the fifth season occurring at least eight months after the season 4 finale, it is safe to assume that Carter is nearly sixteen in the fifth season. The same is hinted at as he and John haven’t had their usual horse rides in quite some time.

John also jokes about not recognizing Cater due to his sudden growth. Actor Finn Little who plays the part has significantly grown up in real life since he filmed his initial appearances on the show. In 2020, when Little shot for season 4, he was about fourteen years of age. However, filming for season 5 started in May 2022. Therefore, Little likely went through puberty during this time, leading to his significantly changed appearance in the series.

The actor’s glow-up left his co-stars confused as well. Cole Hauser, who plays Rip Wheeler in the series, expressed his shock at Little’s changed appearance in an interview with ET Online. “Yeah, he went from, like, a little pudgy kid to all of a sudden lean and tall, and I think he’s 6-foot-1,” Hauser stated. Ultimately, Carter’s glow-up and sudden change in stature mark a turning point for the character’s arc as he will be expected to take more responsibilities in the upcoming episode of season 5.