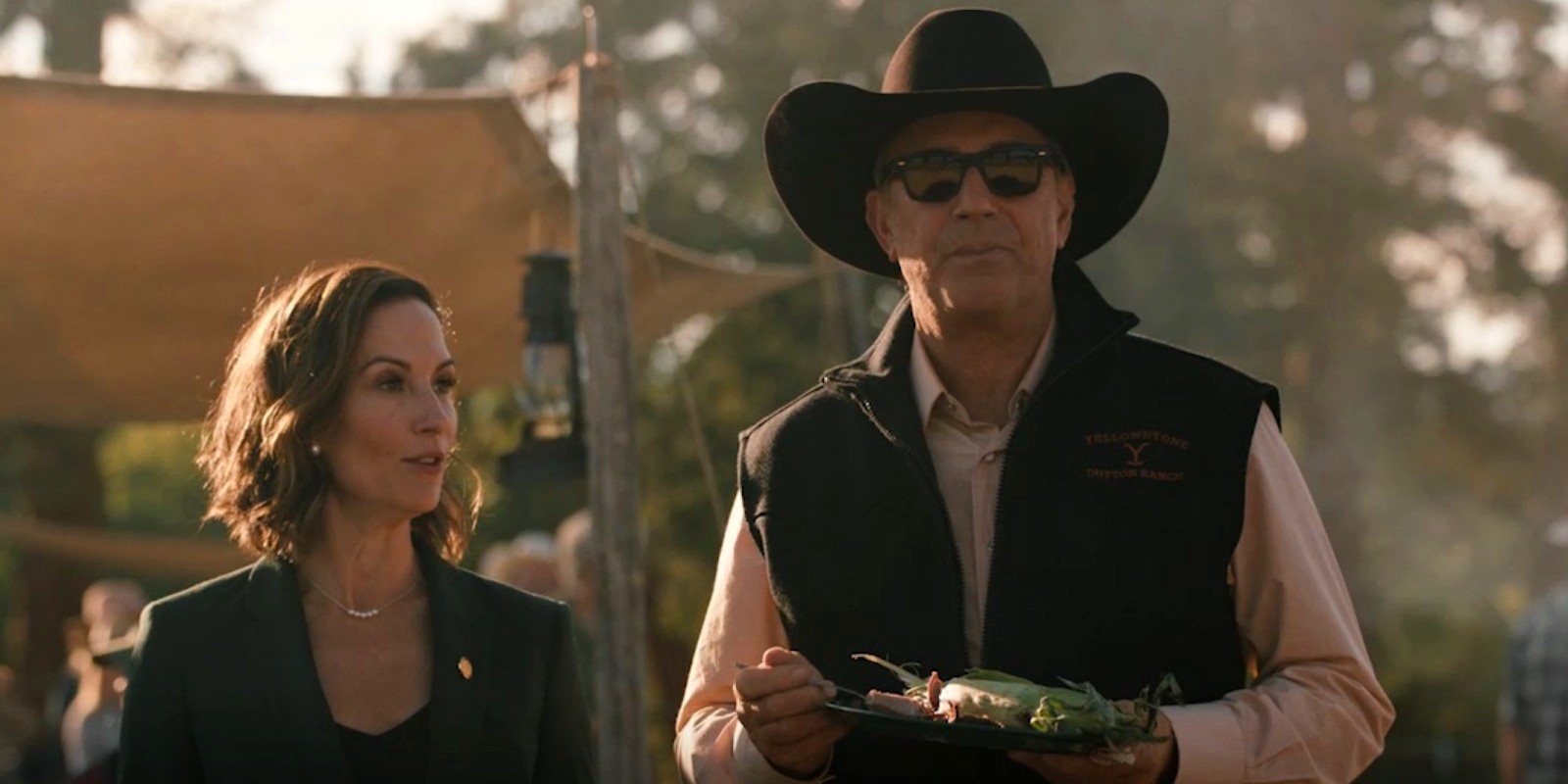 The fifth season of ‘Yellowstone‘ on Paramount Network continues to improve the stakes as the Duttons enjoy some quiet time. The sixth episode, titled ‘Cigarettes, Whiskey, a Meadow and Fog,’ sees John Dutton taking a break from his duties as the Governor of Montana. Instead, he attends the annual cattle branding on the Yellowstone Dutton Ranch. Meanwhile, Chief Rainwater senses the forthcoming political turmoil in Montana while Sarah Atwood continues to set up her pawns to outsmart John. If you wish to catch up on the episode’s events and ending, here is everything you need to know about ‘Yellowstone’ season 5, episode 6! SPOILERS AHEAD!

The sixth episode, titled ‘Cigarettes, Whiskey, a Meadow and Fog,’ opens with the Duttons riding into their pastures to hold their cattle for branding. After dawn, John, Rip, and Beth the sunset from the hill on their land. Later, Mo Brings Plenty is alarmed when he sees the presence of military helicopters on the Broken Rock Reservation. Mo visits the town hall to learn more about the situation and discovers that the military and secret service are preparing for an event on the reservation. He quickly deduces that the President of the United States is visiting Helena, Montana. Mo informs Chief Rainwater about the same. 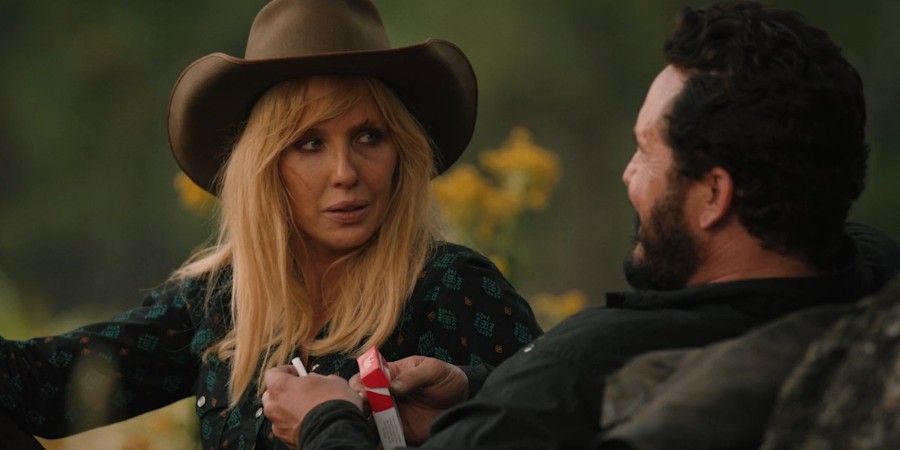 Elsewhere, Jamie Dutton and Sarah Atwood spend another night together. However, Jamie questions Sarah’s motives and wonders if she is trying to manipulate him. However, Sarah frankly responds that she is motivated to make Jamie the next Governor of Montana. If she succeeds, Jamie helping her finish the airport will just be an added benefit. Therefore, Sarah nullifies Jamie’s fears about being manipulated and convinces him that she likes him because of his competency.

At the Yellowstone Dutton Ranch, Summer wanders around the property and talks with Monica. She helps Monica and Gator prepares for the branding brunch. However, Monica explains that Summer needs to stop projecting herself as a threat if she wants to change John Dutton’s way of thinking. Later, Monica shows Summer the Dutton family graveyard and helps the activist realize the land’s sentimental value for the Duttons. Chief Rainwater visits the town hall and is greeted by Angela Blue Thunder.

Angela reveals that she convinced the President to visit the Broken Rock Reservation as she is now the Advisor on American Affairs at the White House. Rainwater warns Angela that the President will have a personal agenda behind the visit. However, Angela warns Rainwater to protect his position since the President will be endorsing Mike, a local youth leader opposing Rainwater’s passive approach to dealing with the tribe’s issues. At the pastures, holding the cattle goes smoothly and quickly, allowing the Duttons to enjoy some free time.

Rip and Beth wander away from the group while John and Kayce talk about Kayce’s grief over losing his son. Later, Rip and Beth spend a quiet and peaceful moment under a tree and enjoy nature. At night, John talks with Emmett before the veteran cowboys fall asleep. However, Emmett does not wake up in the morning and passes away in sleep. John instructs Rip to lead the cattle to the ranch while he arranges for an air ambulance to take Emmett’s dead body to his family.

At the ranch, John consoles Emmett’s widow and reassures her that her husband died the best death a cowboy can dream of. Senator Lynelle Perry arrives for the branding and tells John about the President’s arrival in town. However, John refuses to visit the President in favor of attending his ranch’s cattle branding event. Perry also warns John that pardoning Summer could be a bad move for his political career. However, John reassures Perry that he has a plan in mind. Ryan and Abby dance together and discuss their romantic future, while Summer refuses to dance with John. Ultimately, the Dutton patriarch dances with Perry, highlighting the event’s celebratory atmosphere.

Yellowstone Season 5 Episode 6 Ending: What Are Jamie and Sarah Planning?

In the episode’s final moments, the Yellowstone Ranch is in a bit of a mixed mood. While the passing of Emmett saddens them, the cattle branding is an event meant to raise the community’s spirits. Therefore, despite the tragedy, the ranchers celebrate the occasion with some food, music, and dancing. Meanwhile, a local news channel reports the news of Emmett’s death. The reporters explain that due to the tragedy, John Dutton will not be present to meet the President of the USA during their visit to Helena, Montana. While John’s absence sends the wrong signal to the President and highlights his political incompetency, his decision strikes the right chords with the residents of Montana. 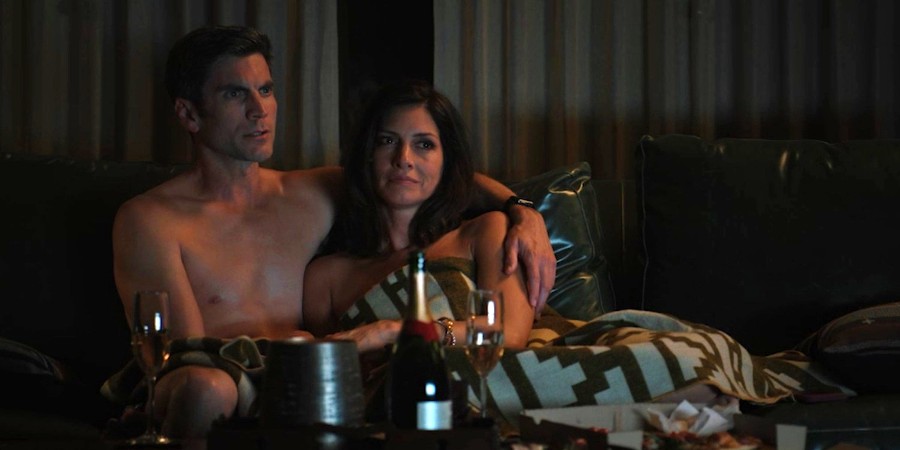 Meanwhile, Jamie and Sarah watch the news broadcast from home. Jamie is pissed at John for always finding a way to shift the narrative in his favor. As a result, he and Sarah start plotting to overthrow John Dutton and install Jamie as the new Governor of Montana. However, Jamie admits that beating his adopted father in a fair fight will be an uphill battle. On the other hand, Sarah had a different opinion. She insists they cannot allow John to join the fight. Hence, Sarah’s words imply that she and Jamie must formulate a plan to make John completely powerless. However, exactly how Sarah and Jamie hope to achieve their goal and defeat John Dutton once and for all remains to be seen.