Is Lifetime’s Malicious Mind Games Based on a True Story? Where Was it Filmed? Who is in the Cast?

Directed by Star Victoria, Lifetime’s ‘Malicious Mind Games’ is a thriller movie that follows Isabel, a single mother who starts working as an overnight security guard at a theatre to spend more time with her daughter, Rosaline, and work on her master’s program. Sadly, her workload during the day means she has trouble staying awake. Noticing her dilemma, Megan, who lives across the theatre, brings Isabel coffee, which leads to a bond of friendship.

One night, Isabel sees an apparent murder in Megan’s home and calls the police. Surprisingly, the woman seems alive and well when the cops check on the latter. Thinking that her sleep may have made her hallucinate, Isabel puts the incident out of her mind. However, when the security guard ends up meeting Megan at Rosaline’s school, the latter does not recognize her, which arouses her suspicions. We are sure that the movie’s premise has captured your interest, and you cannot wait to learn more about the Lifetime movie. Well, we are here to discuss the same!

No, ‘Malicious Mind Games’ is not based on a true story. Amy Katherine Taylor and Katie Grace Young wrote the movie’s script. Amy has been a part of projects like ‘Stolen in Her Sleep‘ and ‘Love Afloat,’ whereas the Star Victoria directorial serves as Katie’s first foray into the movie industry. Despite the movie’s fictional nature, it has several elements that create a realistic feeling. 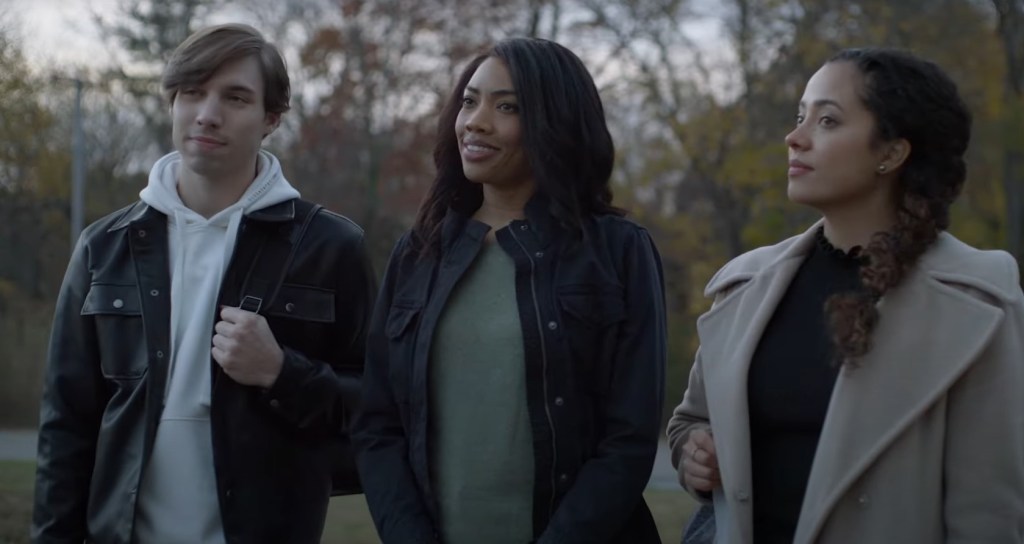 Starting with the protagonist, Isabel Richardson, we see the single mother trying her best to juggle her role as a parent, her studies, and her financial responsibilities. Such a dilemma allows many viewers to empathize with the woman’s struggles immediately. Isabel’s inability to properly focus on her job is not considered the gravest of crimes. Additionally, her earnestness in trying to connect with Rosaline is sure to resonate with parents with teenage children.

While the thrilling turn in Isabel’s life is not something many might relate to, her actions in response to such extreme circumstances are something that a significant portion of the audience can easily understand. The Lifetime thriller tries to depict a relatable storyline without jeopardizing the possible entertainment value. Utilizing the most relatable characters, the filmmakers weave a thrilling tale that employs the best elements of murder mystery, even though the most significant question remains whether or not a crime even took place.

‘Malicious Mind Games’ was primarily filmed in Massachusetts, mainly in Greater Boston. The principal photography for the movie took place for around two weeks in November 2021. Now, let’s look closely at the places that appear in the thriller movie.

‘Malicious Mind Games’ was lensed in Greater Boston, a metropolitan area that includes the city of Boston and its surrounding areas. Apart from locations within Boston, pivotal portions were shot in the nearby towns of Arlington and Milton. Boston is one of the most well-known cities in the US and is popular for housing several reputed educational institutes, including Harvard University and the Massachusetts Institute of Technology (MIT).

Many historically significant events occurred during the American Revolution in the Greater Boston region, like the Boston Tea Party. Given the numerous facilities available within its borders, it is no wonder that the area is one of the favorite shooting locations for filmmakers. Over the years, Greater Boston has hosted the production of several beloved movies, including ‘Knives Out‘ and ‘Little Women.’

The talented April Hale plays Isabel Richardson in ‘Malicious Mind Games.’ You may recognize Hayes from her work in ‘Queen Rising’ and ‘Crazy Neighborhood Moms.’ On the other hand, Raiany Silva essays Rosaline Richardson in the Lifetime thriller. Some of the actress’ other works include ‘Woke‘ and ‘Tell Me Lies.’

Read More: Is Lifetime’s Girl in Room 13 Based on a True Story? Where Was it Filmed? Who is in the Cast?