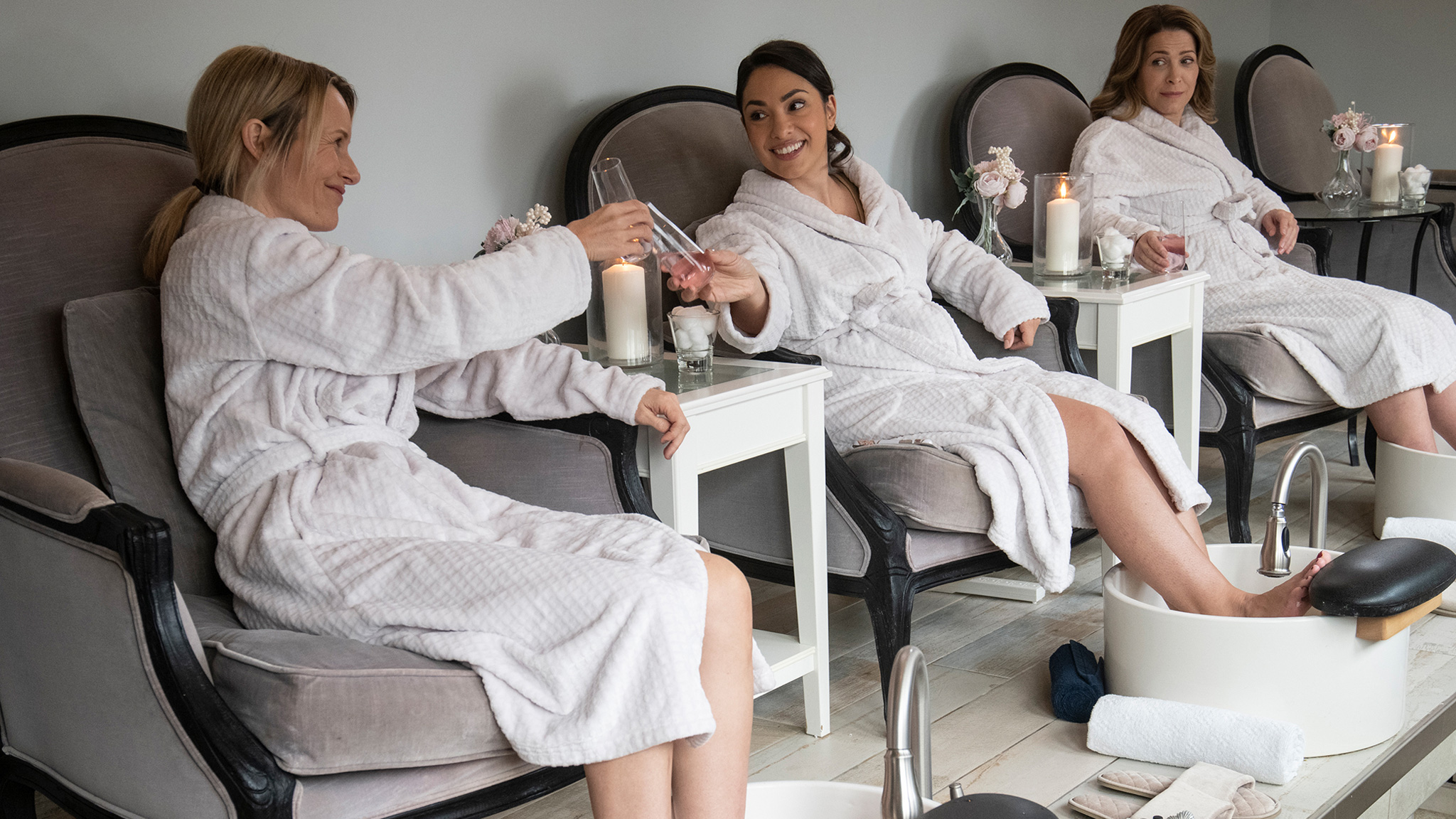 Directed by Jane T. Higgins, Lifetime‘s ‘Deadly Mom Retreat’ is a mystery drama thriller film that follows Jules, a recently divorced mother who is having a hard time coming to terms with the split. However, to help her take her mind off the continuous emotional struggle, Marissa, Jules’ new friend, invites her to a singles’ retreat. She likes the idea and joins her friend, hoping that it will help her relax. At the retreat, Jules meets single dad Zack, who also appears to show interest in her.

However, soon, a series of near-fatal accidents occur that seem to target Jules and involve retreat attendee Georgia. Now, Jules must find a way to survive and catch her assailant red-handed. The mind-games and the struggle that follows can get anyone hooked, and viewers may wish to learn more about the films’ origins, cast, and whether the luxurious haven is an actual location. In case you are looking for similar information, we have got you covered.

‘Deadly Mom Retreat’ was filmed extensively in Ontario. The production for the Jane T. Higgins directorial reportedly wrapped up in the region sometime in mid-December 2020. Located in east-central Canada, the province has previously hosted the production of several other Lifetime movies like ‘Murder on Maple Drive,’ ‘Next-Door Nightmare,’ ‘A Date With Danger,’ ‘Believe Me: The Abduction of Lisa McVey,’ ‘The Perfect Wedding,’ and ‘Left for Dead: The Ashley Reeves Story.’ Curious to find out the specific location where the movie was filmed? Here’s everything you need to know!

The principal photography for the Lifetime movie took place in Ottawa. Situated in the southeastern region of Ontario, the city is the capital of the Great White North and is home to Parliament Hill and the National Gallery of Canada. The city offers a competitive tax credit program to attract domestic and foreign film production projects. The producers can reimburse these credits both at federal and provincial levels depending on the project’s expenditure.

The provincial-level tax-credit programs include Ontario Film and Television Tax Credit, Ontario Production Services Tax Credit, Ontario Interactive Digital Media Tax Credit, and Ontario Computer Animation and Special Effects Tax Credit. Over the years, thanks to its beautiful landscape, production facilities, and generous governmental support, Ottawa has managed to attract a lot of filmmakers to the region and has become a sought-after filming location in North America.

Lara Amersey headlines the drama thriller film by essaying the role of Jules. The actress is famous for her performance in shows such as ‘Monster Warriors,’ ‘Life with Derek’ and ‘Overruled.’ Rebecca Lamarche appears as Jules’ suspected assailant Georgia. You may recall watching the versatile actress in television movies like ‘Christmas in the Rockies’ or ‘A Very Country Christmas: Homecoming.’

Is Deadly Mom Retreat Based on a True Story?

No, ‘Deadly Mom Retreat’ is not based on a true story. The jealousy-driven actions of the antagonist may remind viewers of real-life incidents where people ended up harming others in inconsiderate and unjustifiable rage. It may seem that the Lifetime movie is a depiction of one such incident. However, the credit for the story of the Jane T. Higgins film goes entirely to its screenwriter Jessica Landry, who came up with a unique premise to explore human folly and lack of compassion that drives them to take despicable actions. 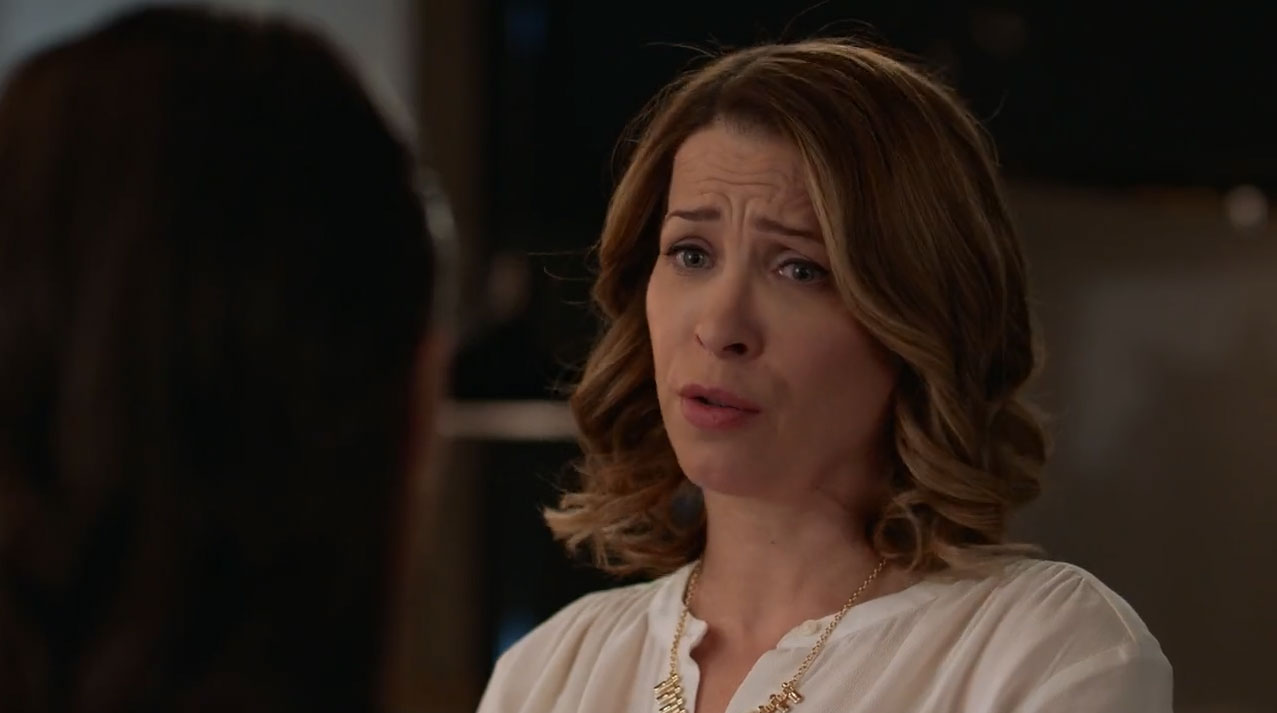 ‘Deadly Mom Retreat’ is entirely based on recurring cinematic themes like marital conflicts, divorce, and envy. Jules’ marital woes lead her to officially separate from her husband, Tom. The life following a legal split has been depicted in numerous films through different characters and plots multiple times in the world of movies and television. However, we must note that the envy-driven actions of the antagonist in the film can be observed in real life.

Such horrific incidents have also served as the central plotline of various movies. A fine example of this will be the Lifetime film ‘Envy: A Seven Deadly Sins,‘ that uses its fictional narrative to explore the lengths to which people consumed by envy and jealousy can go. Although there are no similarities in the premise of the two films, the driving emotions of the antagonists are exactly similar.

Furthermore, the online stalking that Jules had to endure is a familiar experience for a lot of women. According to National Intimate Partner and Sexual Violence Survey (NISVS), about 1 in 6 women have faced stalking, with most of the survivors (54%) being below the age of 25. So, though the Lifetime movie seemingly draws inspiration from real-life incidents to fuel its fictional narrative, the characters and their emotional woes are not inspired by anyone in particular. Therefore, we can confidently assert that ‘Deadly Mom Retreat’ is not based on actual events.