The holiday horror movie ‘Christmas Bloody Christmas’ features a friendly Santa gone rogue. Starring Riley Dandy, Sam Delich, and Jonah Ray, the movie is directed by Joe Begos. Tori hates Christmas and everything related to it. All she wants to do is get drunk and party with her friends. However, things go awry when a robot Santa, which is meant to be fun and friendly, starts malfunctioning and kills everyone in its path.

The movie offers a newer perspective on usual indie horror movies. It features the quest to survive in the face of adversity, holiday jolly went wrong and the brutal impact of technology that is capable of wreaking havoc. If you want to watch movies that revolve around themes similar to this movie, then the following suggestions are perfect for you. You can watch most of these movies similar to ‘Christmas Bloody Christmas’ on Netflix, Hulu, or Amazon Prime.

Featuring 13 stories with Yuletide terror, the horror movie ‘13 Slays Till X-Mas’ is directed by 15 filmmakers, including Brittany Blanton, Sean Blevins, Jed Brian, and Shawn Burkett. On Christmas Eve, five unfamiliar characters unite in a bar and begin to narrate gruesome stories about the jolly festival. They revive the tradition to prove the horror of the festival. ‘13 Slays Till X-Mas’ stars Jeffrey Reddick, Sadie Katz, and Jessica Anderson. Like ‘Christmas Bloody Christmas,’ this movie also depicts characters who hate the festival. Gory scenes and violent deaths also find adequate depiction in both movies.

The horror thriller movie ‘The Advent Calendar’ is directed by Patrick Ridremont. The movie follows Eva, a woman with paraplegia. She receives an ordinary-looking advent calendar, but things turn terrible when she sees a set of rules that possibly guarantee wish fulfillment. Furthermore, the calendar does not have sweet treats for all days, but terrible and bloody gifts made to scare.

The French movie, originally titled ‘Le Calendrier,’ stars Eugénie Derouand, Honorine Magnier, and Clément Olivieri. Both ‘Christmas Bloody Christmas’ and ‘The Advent Calendar’ feature the survival of a strong female lead against all odds. A horror holiday forms the backdrop of both movies as well.

Sophia Takal’s horror thriller movie ‘Black Christmas’ presents a twisted tale of mystery and thrill. Throughout the holiday break, a stranger follows a group of female students. Subsequently, the freshmen sorority pledges learn that the murderer is a member of a covert campus plot. Featuring Imogen Poots, Aleyse Shannon, and Lily Donoghue, the movie is said to be loosely adapted from the 1974 Canadian film ‘Black Christmas.’ Similar to ‘Christmas Bloody Christmas,’ this movie revolves around the holiday horror genre. Moreover, ‘Black Christmas’ is also led by fierce women like Tori.

Michael Dougherty’s holiday horror comedy ‘Krampus’ is based on the titular figure from Austrian mythology. A little youngster in the movie loses his holiday joy due to a dysfunctional family argument. When this happens, Krampus, an evil creature with horns from old European mythology that punishes misbehaving children at Christmas, comes out to play. The family must work together to prevent a terrible fate for one another as Krampus besieges the area. Mythical creatures wreaking havoc across town is a theme parallel in both ’Christmas Bloody Christmas’ and ‘Krampus.’ 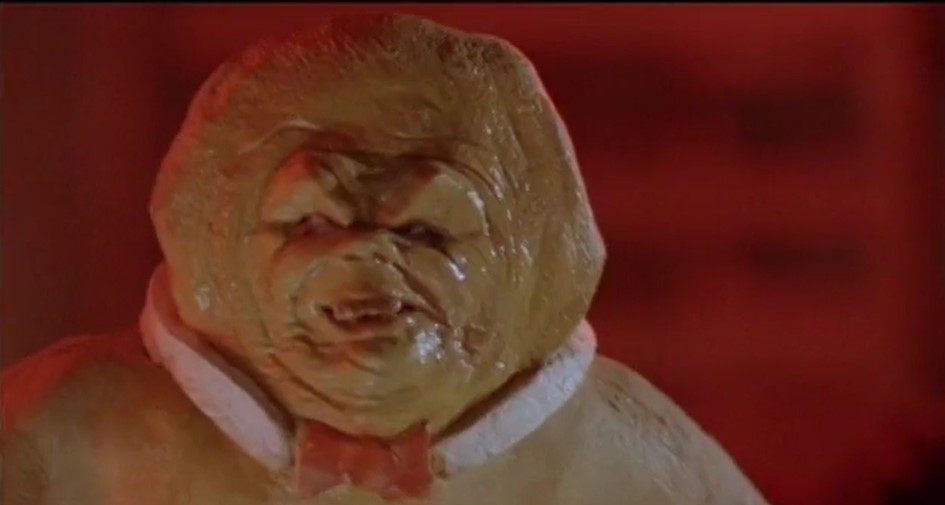 ‘The Gingerdead Man’ is a twisted horror comedy movie with the central motive of revenge. Helmed by Charles Band, the movie features a mother witch who brings her son back to life. This causes further trouble as her son is a serial killer. Furthermore, she revives her son as a giant, evil Gingerbread man to seek revenge on the woman who brought him to justice. The movie stars Gary Busey, Robin Sydney, and Ryan Locke. Both ‘Christmas Bloody Christmas’ and ‘The Gingerdead Man’ make fun and friendly Christmas symbols become evil and engaged in a killing spree.

‘Christmas Evil’ is yet another holiday horror movie focusing on a terrible killing spree. When his efforts are met with hypocrisy and cynicism, a toymaker who loves the holiday spirit has a mental breakdown and embarks on a murdering rampage. The movie also focuses on the impact of traumatic incidents that can ruin a child’s innocence. Written and directed by Lewis Jackson, the horror slasher movie stars Brandon Maggart, Joe Jamrog, and Dianne Hull. Like ‘Christmas Bloody Christmas’ this movie also revolves around a killer Santa.

Billy faces a psychotic collapse as an adult over the Christmas season and then goes on a killing rampage dressed as Santa Claus. While the killer Santa in ‘Christmas Bloody Christmas’ is a robot, the Santa in this movie is a human killer. Albeit, both indulge in a killing spree to terrorize the people of the town.

Tommy Wirkola’s comedy action movie ‘Violent Night’ features David Harbour as the beloved Santa Claus. However, this Santa is more violent than jolly. When he witnesses a wealthy family getting abducted, Santa fights the kidnapper mercenaries to keep the family safe and sound. He portrays how Santa is more than just a jolly, gift-bearing guy. The movie also stars John Leguizamo, Beverly D’Angelo, and Alex Hassell. The gore and violence committed by Santa are similar to ‘Christmas Bloody Christmas.’ Both movies depict gurgling blood and bashed heads very evidently.