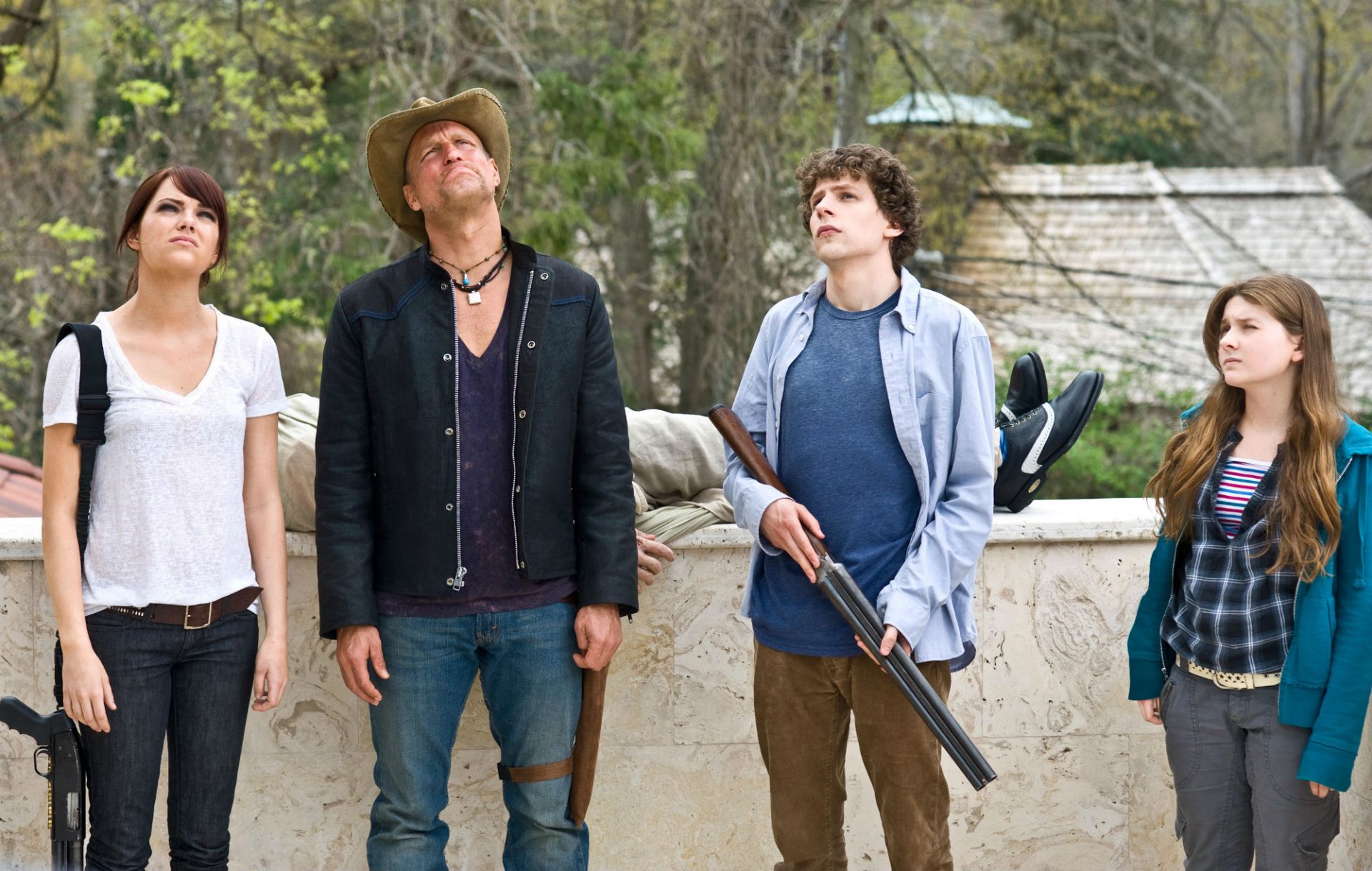 In recent years, there has hardly been any zombie movie as popular as ‘Zombieland‘. A fine blend of horror, action, and comedy, this film offers us a thoroughly enjoyable experience. Directed by Ruben Fleischer, ‘Zombieland’ stars Woody Harrelson, Jesse Eisenberg, Emma Stone, and Abigail Breslin as the four survivors of a zombie apocalypse who now have to defend themselves against the constant onslaught of the undead creatures. While it may seem quite cliche from how it sounds, it turns out to be quite an unexpected adventure. The four of them have to go to a safe location in the south of America before they face any further attacks. The characters of Eisenberg and Harrelson, Columbus and Tallahassee, are the first to meet, and later, the encounter Wichita (Stone) and her sister Little Rock (Breslin). Though the two duos start off as adversaries, they soon realize that a far greater job is at hand. Thus, the join forces to fight the zombies and make their way forward.

The film is an amazing entertainer and had quite a mass-appeal at the time of its release. There are equal doses of comedy, and gore, forming a mixture that is not very often seen in mainstream films. The four actors have also put their best feet forward in this film, with their performances suiting perfectly well with the genre. If you have enjoyed watching ‘Zombieland’ and want to check out some similar films, here are some titles that come highly recommended. You can watch many of these movies like ‘Zombieland’ on Netflix, Hulu or Amazon Prime. 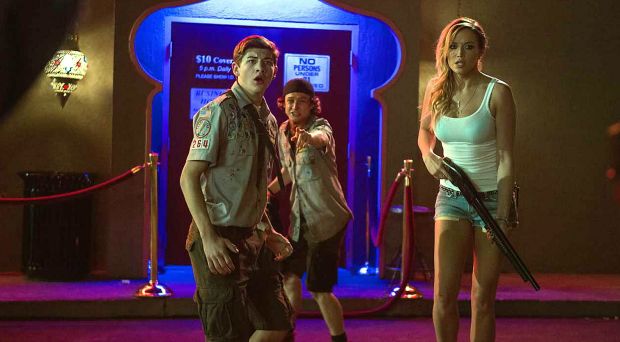 Another comedy-horror film, ‘Scouts Guide to the Zombie Apocalypse’ is the story of three boy scouts who plan to go camping for one last time before they have to give up their lives as scouts. While driving through a town, two of the boys, Ben Goudy and Carter Grant, notice that there is not a single living soul in the place. They spot a bar and decide to go there since there is no bouncer at the door. When they manage to enter the bar, they realize that everyone there has been turned into zombies. They take the help of their third friend, Augie, and rush to the police station, only to discover that the entire town has been evacuated. ‘Scouts Guide to the Zombie Apocalypse’ does not have anything new to add to its genre, and uses the same old cliches of a zombie film which we have seen on numerous occasions. 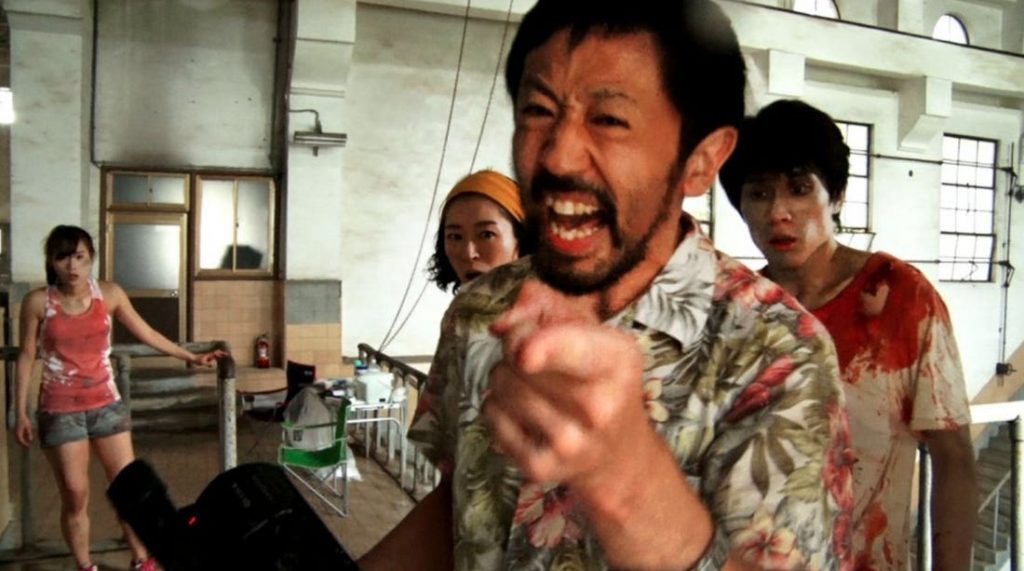 This Japanese film is one of the most innovative and hilarious zombie-comedy movies you will ever come across. ‘One Cut of the Dead’ centers around a film crew that has visited a WWII Japanese facility to shoot a low-budget zombie film. After an argument between the director and the actors, the former leaves, only to return to see that the crew members are being attacked by real zombies. He decides to keep the camera running to film whatever is happening to the crew. The narrative then jumps to the past to make it clear as to why this film is being made in the first place. ‘One Cut of the Dead’ satirizes the zombie genre like no other and uses all the tools at its disposal quite effectively. The film has received universal critical acclaim and even created history at the box office by earning around a thousand times of its production budget. 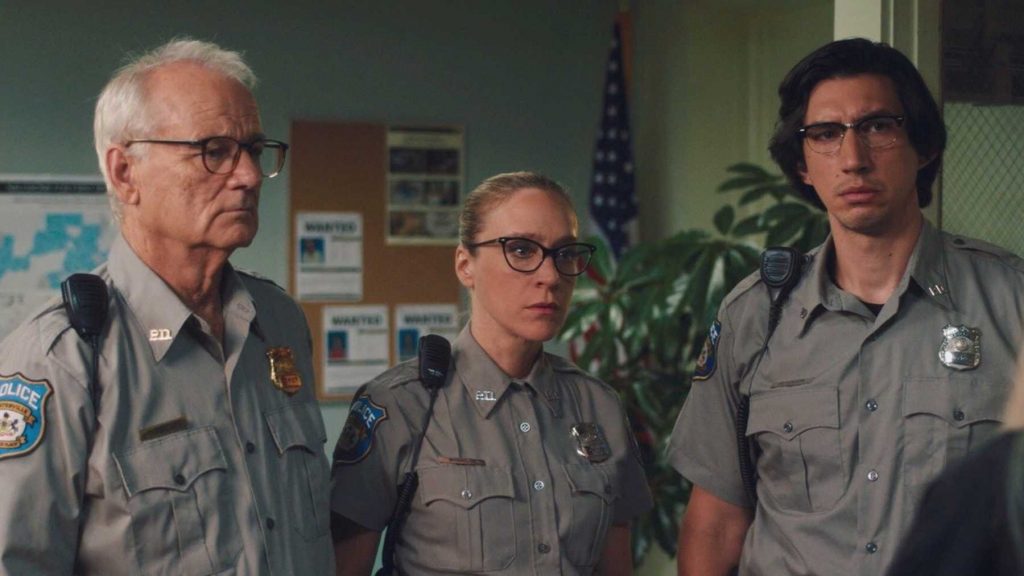 Jim Jarmusch has always aestheticized his horror films, which, though might appear intellectually stimulating for some, lose their appeal because they are hardly ever scary. However, it can also be argued that making a scary film was never the aim of the filmmaker in the first place. With his 2019 film, Jarmusch has made a straight-up horror-comedy, and we couldn’t be more excited. The story of ‘The Dead Don’t Die’ is based in a sleepy town called Centerville where the inhabitants are becoming a little suspicious of the weather changes. Even the animals of the town have started behaving weirdly. Soon enough, we realize that all this is because a zombie attack is just around the corner. Adam Driver and Billy Murray play two police officers who come across open graves and get into a battle against the zombies. The film uses a number of self-referential jokes which are a trademark of the director. However, it must be said that the story of the film does not offer anything new to the audience. Moreover, there is a deadpan tone to the film which doesn’t really work well with the horror-comedy genre. 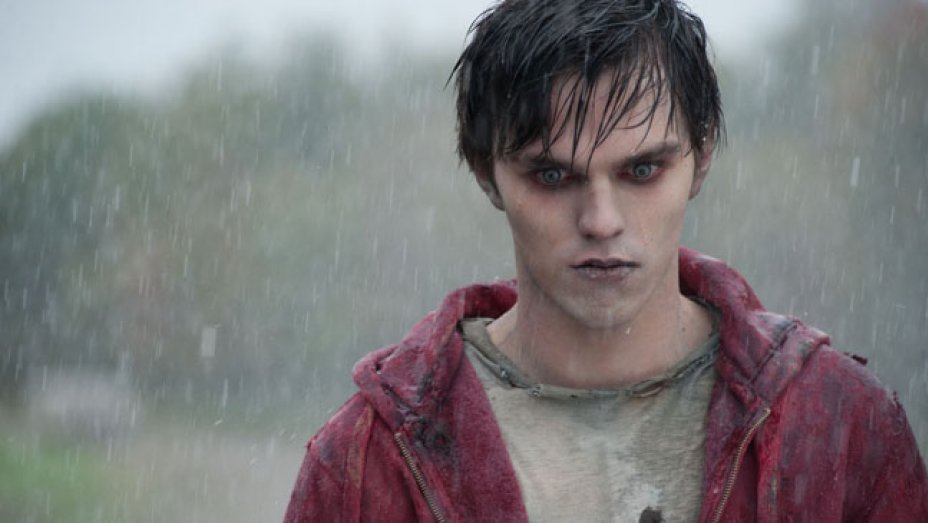 It is truly appreciable when a filmmaker takes a genre of his choice and then subverts it to offer something fresh which we have not seen before. This is exactly what we see in the film ‘Warm Bodies’, directed by Jonathan Levine. Based on the similarly-titled novel by Issac Marion, the film centers around a zombie called R, who begins to develop a soft corner for a girl called Julie. Even R does not understand at first the reason behind him feeling so protective about the girl. However, their relationship is constantly under a threat because of the extremely different natures in which they operate. The film tells the story from the perspective of a zombie, and that is what makes it extremely unique. The spin on the genre naturally becomes the most interesting aspect of the film. 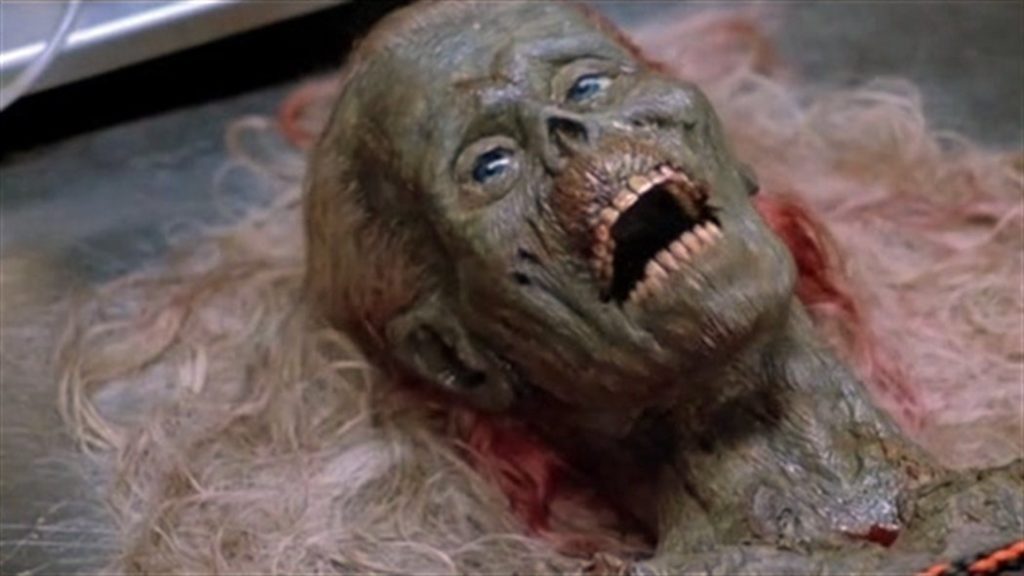 One of the most popular cult zombie films of all time, ‘The Return of the Living Dead’, is the story about how the carelessness of two men led to massive destruction in a town. The film begins with two workers of a secret military warehouse accidentally releasing a poisonous gas which results in the corpses rising from the dead and attacking humans to feed on their brains. The zombies attack humans in all sorts of gory and outlandish ways which are violent as well as comedic at the same time. Besides the plot and the zombies being given new characteristics in film, ‘The Return of the Living Dead’ is also famous for its soundtrack which consists of many punk rock and deathrock songs. The film has had a massive impact on how zombies are portrayed in mainstream culture. 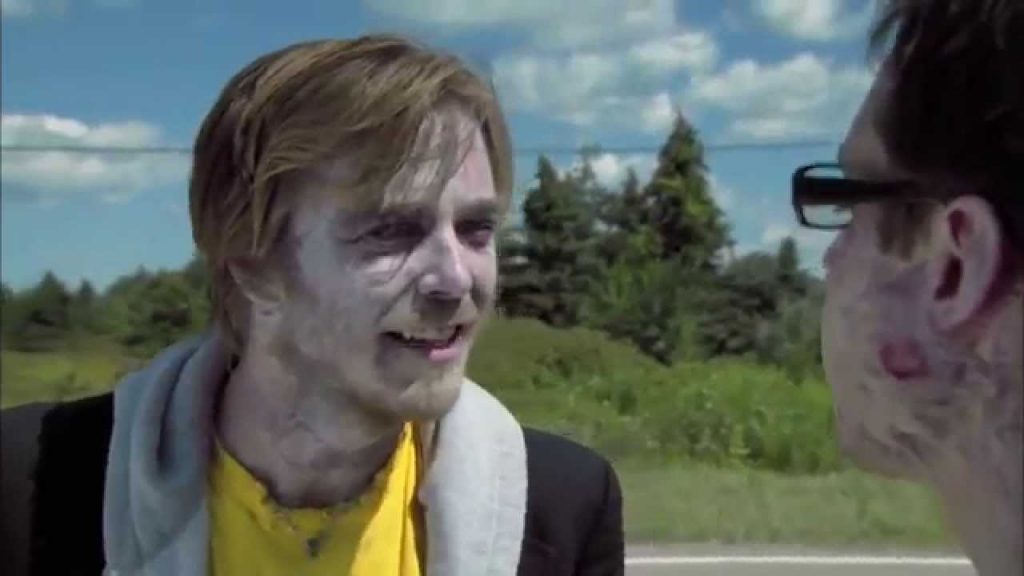 ‘DeadHeads’ is another film told from the perspective of zombies. The two central characters of this film are Mike and Brent. Both of them are zombies, but have retained their human sensibilities, and also their memories. After his memory returns, Mike becomes eager to meet his girlfriend. As the two of them head out to meet Mike’s girlfriend, they are not aware of the fact that an evil corporation is tracking them. The film is definitely made without paying much attention to its plot. However, it must be said that the film is thoroughly enjoyable. The actors have put up a tremendous performance, and the direction is also without flaws. The humor is inconsistent but works quite well in the places where it is present. 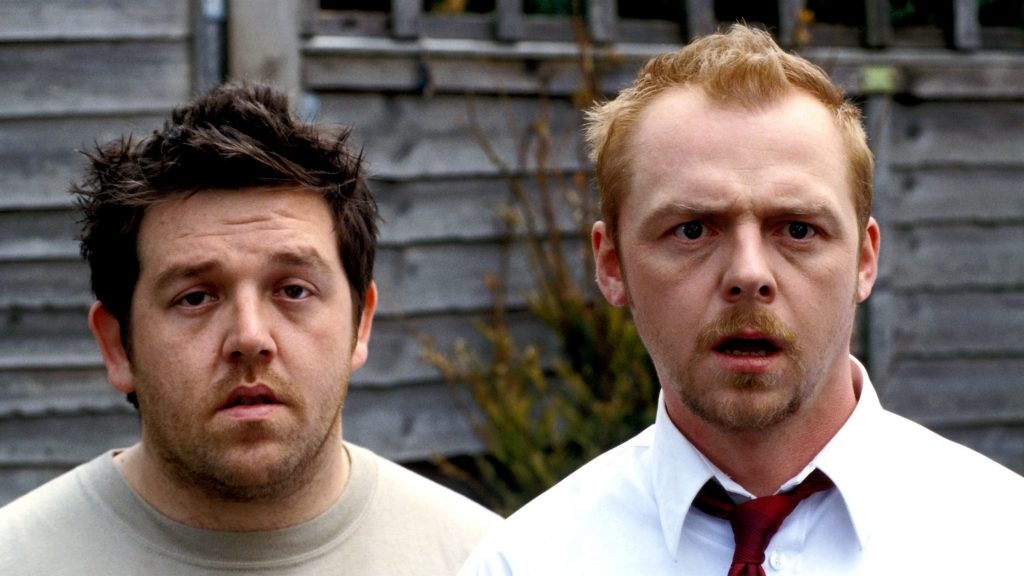 Edgar Wright is someone who has always loved working strictly in genre films. However, his genre films have always transcended their scopes to become a satire of the genre tropes. This is exactly what he does in his 2004 zombie film ‘Shaun of The Dead’ which he co-wrote with lead actor Simon Pegg. The film centers around Pegg’s character Shaun, who is a salesman living in a small town. His life has no direction, and he is content with spending time with his friends and girlfriend at a local pub. However, everything changes when Shaun and a friend of his have to fend off an entire army of zombies by themselves. However, Shaun is using this fight not only to save his own life, but to show the entire world that he is not a loser. The film is hilarious in its writing and the direction also complements the same.