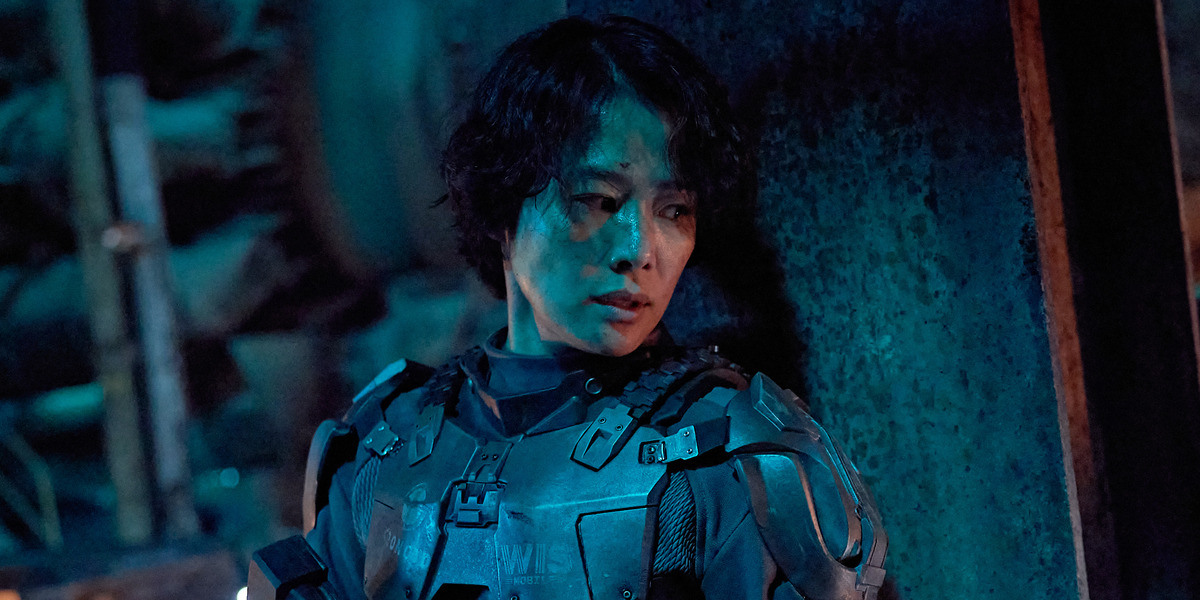 Netflix’s science-fiction thriller film ‘JUNG_E’ is written and directed by Yeon Sang-ho. The South Korean film follows a group of scientists in a post-apocalyptic world where the earth is inhabitable. Humanity is in peril as two factions fight for supremacy over the world. The group of scientists works on creating combat AI-powered robots that are the lost hope of establishing peace among humanity. Legendary soldier Yun Jung-Yi serves as a model for the robots, as her combat abilities are unparalleled. However, when the tide of the war changes, Jung-Yi’s legacy is at risk, and her daughter Seo-Hyun is tasked with saving her mother’s memory. If you are wondering about the fates of Seo-Hyun and Jung-Yi, here is everything you need to know about the ending of ‘JUNG_E.’ SPOILERS AHEAD!

In ‘JUNGE_E,’ rapid climate change has made the earth nearly uninhabitable. As a result, most humans have settled on colonies in the moon’s orbit, knowns as shelters. However, some of these shelters joined forces and declared themselves as the Adrian Republic and challenged the rest of the shelters. As a result, the Allied Forces were formed, leading to a decades-long war between the two factions. During the war, Yun Jung-Yi was a legendary mercenary whose efforts brought the Allied Forces to the brink of victory. However, she failed in the final mission and fell into a coma, dragging on the war. 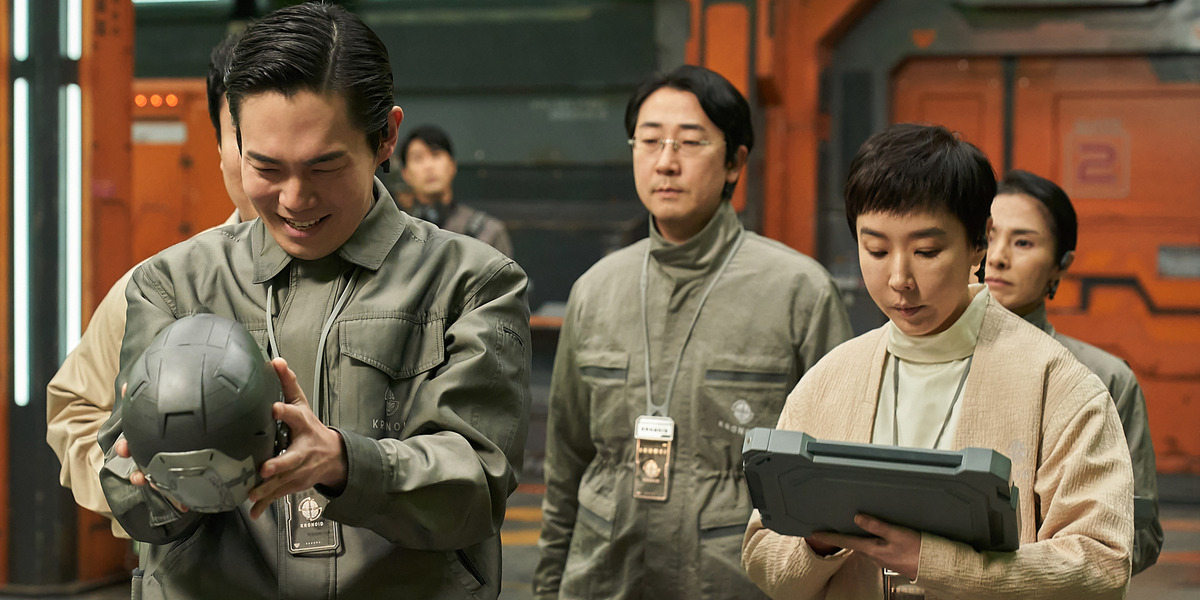 At present, Kronoid is a corporation that manufactures advanced military weapons for the Allied Forces. The hopes of ending the war rely on developing a combat Artificial Intelligence based on Yun Jung-Yi’s neural cortex. At Kronoid, Yun Jung-Yi’s daughter, Seo-Hyun, heads the project to replicate her mother’s brain and convert it into a combat AI. She works with the Director of Technology, Sang-Hoon, to run a simulation that helps them extract Jung-Yi’s combat ability from her brain. However, the prototype models dubbed “JUNG_E” are unable to clear one specific moment in the simulation, resulting in an incomplete product.

As the narrative professes, viewers learn that Seo-Hyun had cancer and her mother became a mercenary to provide for her treatment. However, she failed in the final mission, and Seo-Hyun agreed to give Kronoid permission to use Jung-Yi’s brain for their military project. One day, Seo-Hyun meets the Chairman, the supreme leader of Kronoid. He explains that the war is coming to an end as the Allied Forces and the Adrian Republic are signing a treaty to establish peace in the shelters.

The Chairman orders Seo-Hyun to end the JUNG_E program and research alternate applications. Consequently, Seo-Hyun realizes that Kronoid will make domestic robots powered by her mother’s brain replicants. Thus, Jung-Yi’s reputation as a legendary soldier of the war is at stake. Simultaneously, Seo-Hyun regrets her mother’s choice to fight in the war to save her life. Therefore, she wonders if her mother ever resented her. Therefore, Seo-Hyun faces a complex moral dilemma as her mother’s last memories are nearing erasure.

On the other hand, Sang-Hoon is revealed to be a robot created by the Chairman to develop combat AI. However, when the Chairman reveals that the JUNG_E program will be shut down, he reacts badly and feels like his life’s work is being abandoned. Therefore, Sang-Hoon resolves to prove himself and complete the program. However, his aggressive methods adversely affect Seo-Hyun, who is forced to see her mother become a linchpin in the hands of greedy bureaucrats.

Meanwhile, Seo-Hyun discovers that her cancer is returning, and she does not have long to live. On the final day of running the simulation, Seo-Hyun converses with her mother’s decommissioned combat test model. Seo-Hyun tells JUNG_E about her past and her relationship with her daughter. She asks the test model about the final mission, which took place concurrently with Seo-Hyun’s surgery. JUNG_E reveals that she failed the final mission because she became distracted by her daughter’s memory.

The film’s final act revolves around Seo-Hyun’s efforts to save her mother’s remnants from being misused by Kronoid. The corporation wants to find domestic uses for the Ai based on Jung-Yi. However, Seo-Hyun is touched when she learns about her mother’s love and affection for her daughter. As a result, she decides to give the JUNG_E AI a fresh start by helping one of the test models escape. Before running the final simulation, Seo-Hyun erases her daughter’s memories from JUNG_E’s program. On the other hand, Sang-Hoon tries to tap into the newly discovered area of Jung-Yi’s brain to complete the program. 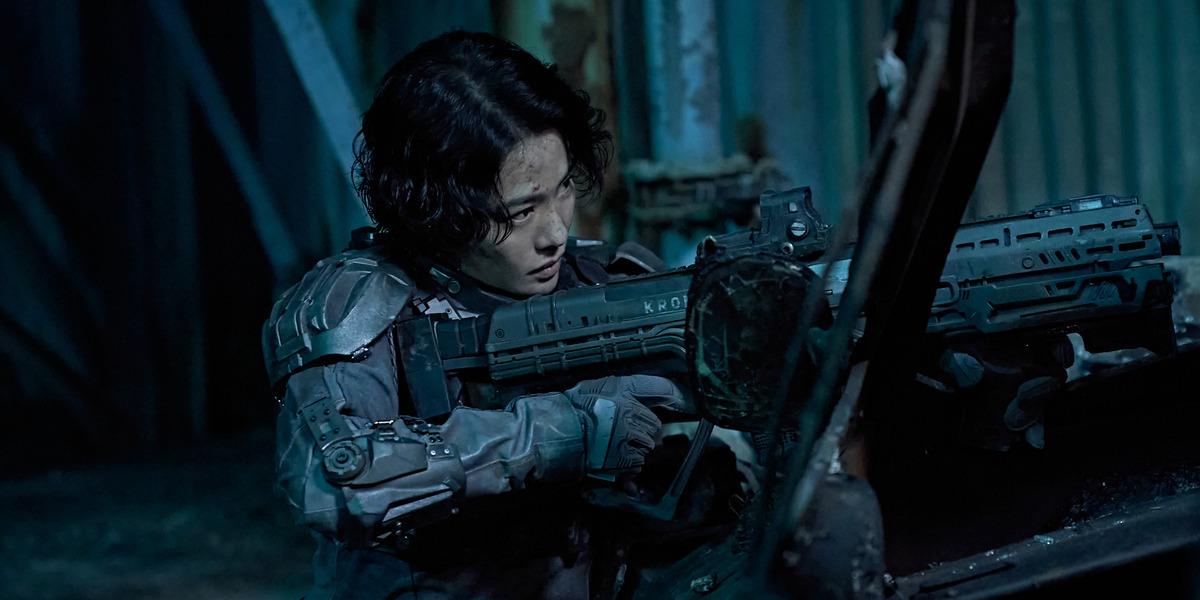 In the end, the JUNG_E test model once again fails the simulation despite Seo-Hyun erasing the distracting memories. Nontheless, when the simulation ends, Seo-Hyun helps the JUNG_E test model escape from the Kronoid facility. Seo-Hyun knows that she does not have a lot of time to live as she has cancer. Her mother had already once risked her life for the daughter’s sake. Therefore, she does not want the remaining fraction of her mother’s personality to suffer a similar fate.

Ultimately, Seo-Hyun and the JUNG_E test model escape from the facility but are forced to fight the police robots and Sang-Hoon’s forces. During the climactic battle, Seo-Hyun is shot in the stomach. When JUNG_E tries to come to her rescue, she orders the robot to save herself. As a result, JUNG_E engages in a battle with Sang-Hoon. During their fight, Sang-Hoon realizes that he is merely a robot created by the Chairman. An enraged Sang-Hoon fights JUNG_E on top of a moving train.

The fight culminates with JUNG_E defeating Sang-Hoon. As a result, the spirit of the legendary Jung-Yi that resides within the test robot prevails and successfully escapes the same grim fate it had been subjected to countless times in the simulation. Moreover, through JUNG_E, the valiant mother gets to share a touching moment with her daughter before embarking on a fresh start. The sacrificial tale of a mother and daughter comes to a heart-warming conclusion as their love trumps all programs, codes, and protocols, to reunite despite the technological obstacles.

In the film’s final moments, JUNG_E reunites with Seo-Hyun after defeating Sang-Hoon. Seo-Hyun gladly sacrifices herself to save the robot and gets shot in the process. However, before she can perish, she gets to have one final interaction with her mother. Despite erasing the memories of her daughter from the cortex of Jung-Yi’s brain replica within the robot, it turns out the AI still has a recollection of Seo-Hyun. JUNG_E hugs Seo-Hyun and gives her a warm check rub which the mother and daughter fondly share when parting ways. 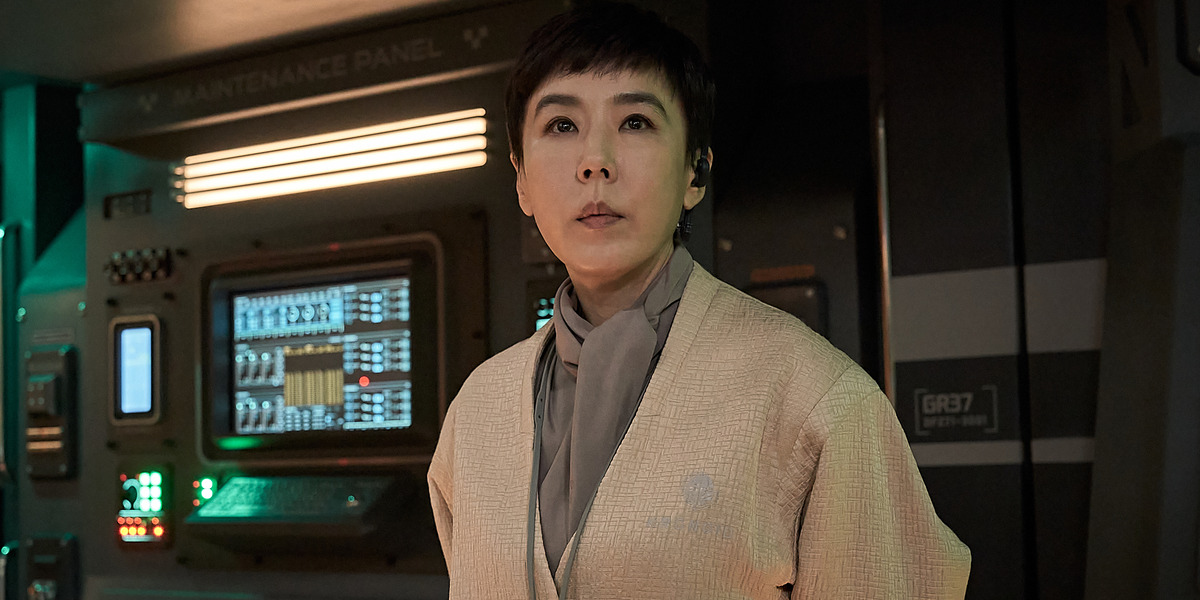 Before leaving for her final mission, Jung-Yi shared a similar moment with her daughter promising to return to her side once the task was completed. In a metaphorical sense, Jung-Yi’s mission is now complete, and she is no longer required to fight in the war. Therefore, Seo-Hyun’s mother spiritually returns to her in the final moments. It is also implied that a part of Seo-Hyun will always live within JUNG_E’s memories. It would also explain why the robot failed the final simulation despite Seo-Hyun erasing the memories. Ultimately, Seo-Hyun passes away in her mother’s presence, having saved what remains of Jyug-Yi within the AI.

However, Seo-Hyun is a brilliant scientist and an expert in brain replication. Therefore, it is possible that she could have saved herself with the same technology she helped develop. However, given the mistreatment of her mother’s legacy and brain, it is unlikely that Seo-Hyun wanted to take that path herself. Therefore, she makes peace with her fate and finds solace in the fact that her mother’s reputation as a legendary soldier who bravely fought in the war remains intact. Moreover, a daughter sacrificing herself for her mother makes an emotional ending for the movie that highlights the bond between Seo-Hyun and Jung-Yi.