‘Rick and Morty‘ has always been a show that thrives on outdoing itself. ‘Rick and Morty’ season 5 episode 2 is the perfect example of the animated show doing something wholly new and off-the-rails. The themes of existentialism are omnipresent in this hilarious episode that follows Rick, Morty, and the rest of the family trying to deal with decoy versions of themselves.

If after watching the episode, you got lost keeping track of the various twists and fakeouts and were totally stumped by the episode’s ending, allow us to unravel the intricate combination of science fiction, philosophy, and humor that is the latest episode of ‘Rick and Morty’ season 5. Here is everything you need to know about the episode’s events and its confusing ending. SPOILERS AHEAD!

The second episode of ‘Rick and Morty’ season 5, titled ‘Mortyplicity,’ opens with Rick and his family having a usual family dinner. Rick notices a behavioral inconsistency in Jerry. In no time, a squid-like alien emerges and guns down the family. We quickly shift to another Smith family house, where Rick stops Summer and Morty from shooting Mr. Always. He gets a notification alerting him of the “decoy” family’s death. As the episode progresses, we realize that the various decoys have created more decoys, and the squid-like aliens are hunting them all down. 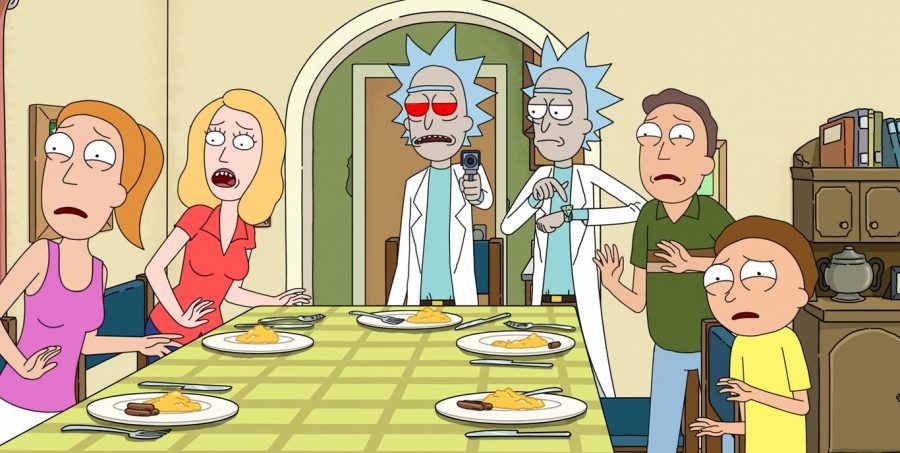 When Rick and the family ambush another decoy family dressed like the squids, they realize the squids are decoys trying to kill the other decoys. Quickly, the decoy battle escalates on a large level. All the while, various Beth decoys are trying to convince Rick that the decoys shouldn’t be killed. Finally, one family escapes the war and is saved from an evil Rick by another decoy family. We learn about an alliance between the decoys to stop the war. However, their base is also attacked, and the war continues until just one family is left, the “real” family.

Rick and Morty Season 5 Episode 2 Ending: Why Did Rick Make a Decoy Family?

Towards the end of the episode, only two families stand. They fight until just one version of Rick, Jerry, Beth, Summer, and Morty remain. However, amidst all the chaos, no one knows if they are real or decoys. Finally, Mr. Always shows out of nowhere and shoots them all. The scene shifts to show Rick and the Smiths returning from a road trip in space. Space Beth is also with them. Just then, Rick gets a notification of the decoy family’s demise. The moment seemingly confirms that the real family was off-Earth all along. 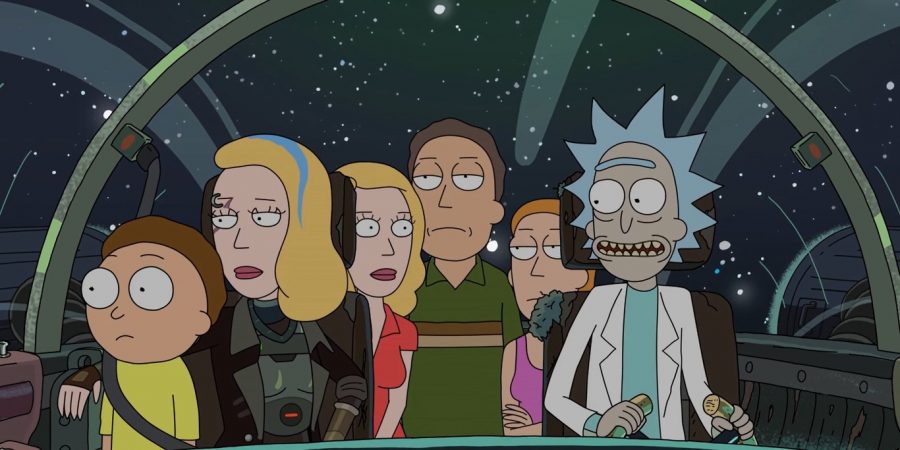 Through all the twists and turns, the episode never explains why Rick created the decoys in the first place. Rick, who we later find out is a decoy, argues with Beth that he created the decoys to keep his family safe. However, the decoys are being hunted by the decoys, which makes the argument redundant. The question also remains if the real Rick is aware that the decoys have multiplied. In the end, it seems like there are no decoys left. The entire decoy plotline was a fakeout, intended to give an impression of using an uber-complex sci-fi concept to examine the more profound philosophical questions of life.

The ending signifies that while we were looking at the decoy plotline as an entangled inward story, it was actually an outbound journey. Synthetic life developing sentience and creating more like themselves is a common sci-fi trope. This trope is used as a two-bladed dagger seasoned with meta-humor into the heart of existentialism, one of the show’s recurring themes. The depleting quality of decoys is likely a metaphor for the family’s flaws. 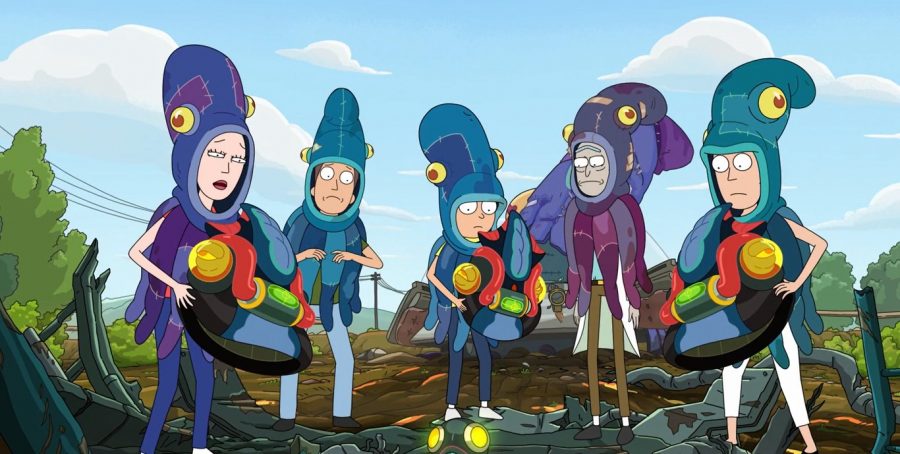 A decoy Rick gets an earful from Beth about creating the decoys. She says that Rick made the decoys because he is afraid of dying and/or losing his family — an action that is contradictory to Rick usually finding life and family burdensome. In the episode, behavioral contradictions are generally pointed out as a sign of being a decoy. While the versions of Rick and Beth in this particular moment are decoys, it makes us wonder whether the real Rick created the decoys out of a necessity or as another way to prove that he is superior to all other beings. So while Rick does care for his family, he also puts them in constant danger, thus creating a never-ending need to protect his family. From whom, you ask? From himself, as if that isn’t pretty apparent by now.

What is an Asimov Cascade?

In the episode, Rick refers to the decoys killing other decoys as an “Asimov’s Cascade.” The term is a fictional one coined by Rick himself and is likely an ode to the legendary author Issac Asimov, who is known for his stories about robots and other synthetic life forms. An Asimov’s Cascade is a simple paradox. As Rick explains, the decoys killing each other leads to the decoys realizing that the others are creating decoys. This realization leads them to checkup on the decoys created by them.

The action sets them on a collision course with other decoys triggering off the killings. The entire ordeal results in the various decoys learning the truth about their existence. The effect created by the successive passing on of certain information is known as a cascading effect. In the episode, there are various references to the three laws created by Issac Asimov, which all robots must ideally follow. Thus, while the episode treats the decoys as a complex concept, they are essentially just robots.

“A robot may not injure a human being or, through inaction, allow a human being to come to harm” is Asimov’s first law, and thereby Rick initially considers the decoys harmless. The 2nd law states that “a robot must obey the orders given to it by human beings except where such orders would conflict with the First Law.” In the end, all the Ricks and Smith family members on Earth turn out to be decoys. Thereby, both laws are technically intact.

The third law states that “a robot must protect its own existence as long as such protection does not conflict with the First or Second Law.” This law explains that the decoys are killing each other for self-preservation. However, as the conflict escalates, the decoys only become aware of their synthetic nature when they are about to die. Therefore, the three laws are also somewhat contradicted in the episode creating a different paradox altogether.

In the opening moments of the episode, Rick and Morty are pumped about killing God. They claim that the Christian God is real and has been asleep for thousands of years. Later in the episode, one of the decoy Jerrys made out of wood dooms the other decoys because he wants to live. He does live, and it seems like he will live on forever. In the post-credits scene, we see that the severed head of the decoy Jerry has been alive for thousands of years. 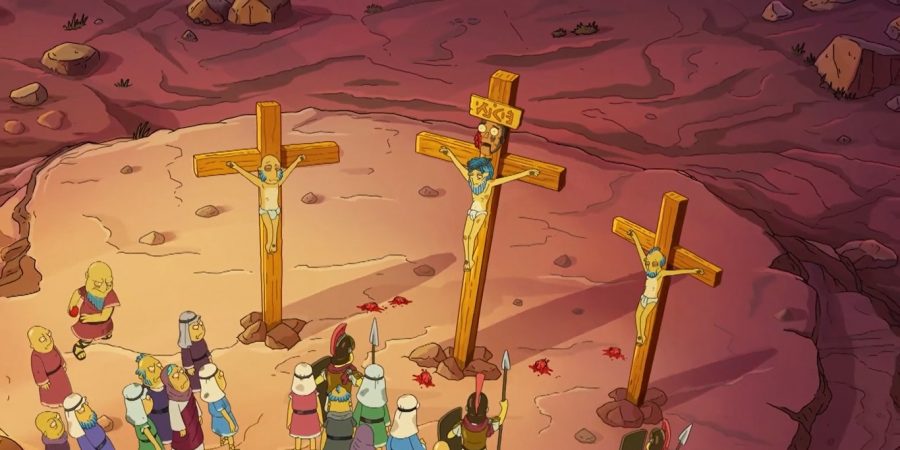 He finds himself in an era dominated by cowboys. After that, he wakes up thousands of years later, in an era where a Christ-like figure is being crucified. He yells in agony as humankind has invented Christianity all over again. This makes us wonder whether Rick and Morty were indeed right about God being real. For a show that has often aligned itself with atheism or is agnostic, to say the least, the entire gag is another one of the show’s well-rounded off jokes that are so subtle they are hardly going to offend anyone. However, could this Jerry be the God we see Rick and Morty talk about? After all, he is around for thousands of years and sees the birth/rebirth of Christianity. It is possible that the gag is a setup for an episode that tackles the duality of religion.