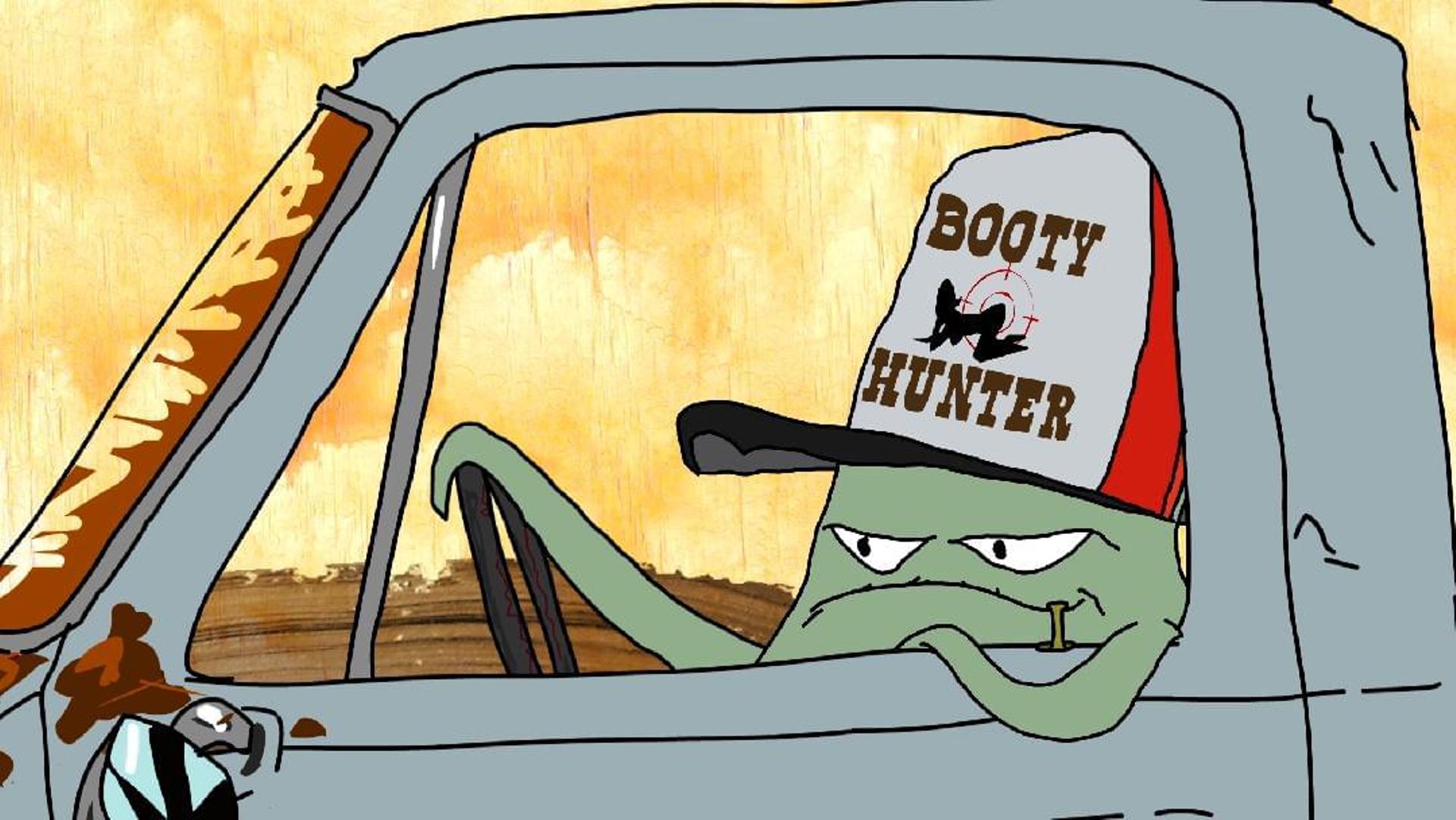 While Cartoon Network has thoroughly entertained children throughout the years, it is their adult programming block Adult Swim, which has kept the adults hooked on to the channel. Adult Swim has constantly come up with hilarious adult animated shows which are sometimes eccentric and sometimes quite subversive. These shows have constantly pushed the boundaries of the animation medium. Most of these shows severely critique modern existence and our alienated lifestyles. One such show which does this brilliantly is ‘Squidbillies’. Created by Jim Fortier and Dave Willis, this series centers around the redneck squid family called the Cuylers. They hardly care about the law and behave in any manner they see fit owing to the fact that the local sheriff is their close household friend. However, this does not go on for long, and soon the patriarch Early Cuyler finds himself in jail.

While Cuyler is serving time in prison, Early comes to know that he has become a father when his illegitimate child Rusty is born. Without Earl around, Rusty’s Aunt Lil is the one who raises him. While looking after Rusty, she also operates the crystal meth lab. The setting where this family lives, Dougal County, is full of miscreants, drug dealers, gambling addicts, an evil corporation, and all such nasty elements which are prevalent in modern society. Here the makers give us a picture of an ultimate degradation where moral codes have gone for an ultimate toss, and only the ones who can bend the rules manage to survive. If you loved watching this series and are looking for similar shows, then we’ve got you covered. Here’s the list of best shows similar to ‘Squidbillies’ that are our recommendations. You can watch several of these series like ‘Squidbillies’ on Netflix, Hulu or Amazon Prime. 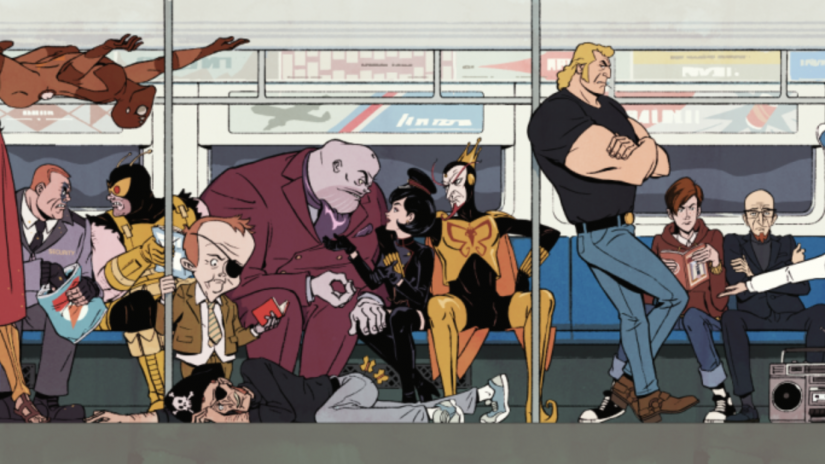 Another Adult Swim series, ‘The Venture Bros.’, is a spoof of teenage space adventure fiction which gained mainstream popularity during the 1960s. The central characters of the series are Hank and Dean Venture, the two sons of Dr. Thaddeus “Rusty” Venture, an eccentric scientist with a drug problem. The family is at first guarded by former secret agent Brock Samson, who is an ultra-violent figure looking for the slightest chance of causing mayhem and destruction. Brock is later replaced by Sergeant Hatred, who was formally jailed on charges of pedophilia. We follow the several adventures this group of people undertake, most of which usually end up in dangerous or funny situations. Critics highly praised the thematic ambitions of the show. Figures like David Bowie and Hunter S. Thompson, along with pulp magazines, are regularly referred to in the series. 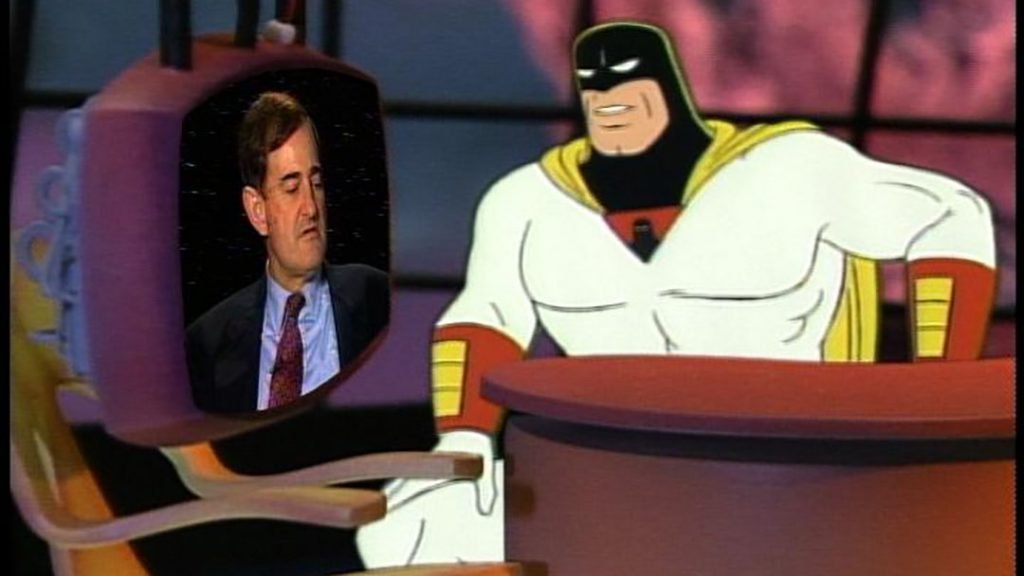 Talk shows have been a very popular form of television programs for quite some time now. There have been numerous talks shows like ‘The Today Show’, ‘The Tonight Show’, ‘The Late Show’, and others. These programs have gone a long way in shaping the television content that we consume today. The Adult Swim series ‘Space Ghost Coast to Coast’ is a wonderful parody of such shows, with a rather unique twist. In a surrealist approach, here the interviewer is an animated being while the guest is a real person, who appears on a television set. The host of the show, Space Ghost himself, is a superhero parody who begins most interviews by asking the guest about his superpowers. The interviews mostly turn out to be rather awkward by the end. If you love watching talk shows, you must give ‘Space Ghost Coast to Coast’ a try. The way this show picks up the minutest details of such programs and makes a parody of them is truly outstanding. 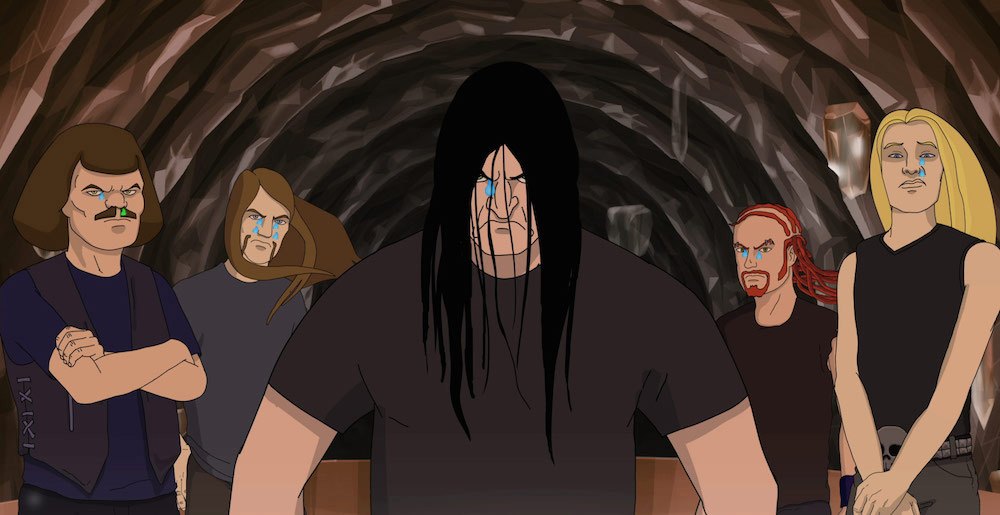 Death metal bands are not only about their music. There’s a lot of showmanship involved in their entire act, with heavy use of Satanic symbolism, blood, gore, sacrifices, and such other stuff. Thus it was a perfect decision to make a death metal band the center of attention by Brendon Small and Tommy Blacha, when they thought of creating an animated series critiquing fan culture. The band in question is called Dethklok, and they are the most popular entertainment act in world history; so much so that they’re the seventh-largest economy in the world. The band is so big that they even have a police force of their own and can easily drive any politician out of his position. The show is an intense critique of modern consumerist tendencies and fan culture where certain entertainers are constantly projected by the mass media as something divine. Death metal bands hardly get mainstream success and are usually underground acts where their subversive content finds a dedicated fanbase. By bringing such an act to the forefront, the series attacks mainstream culture quite ruthlessly. 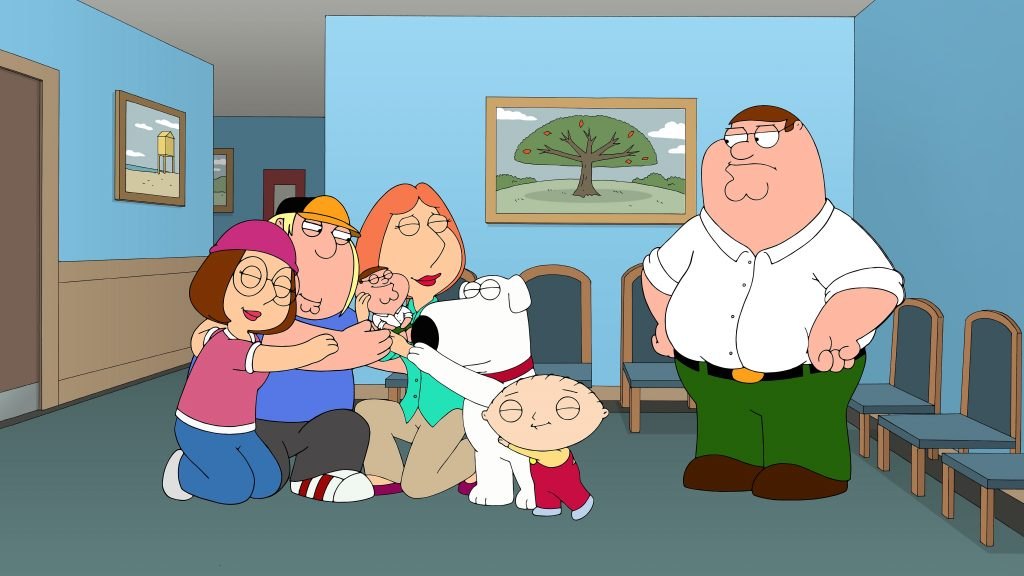 One of the most famous adult animated shows of all time, ‘Family Guy‘ serves as one of the harshest critiques of modern America told from the perspective of an urban family. The father of the household is a blue-collared worker who is rather clumsy, as is his son Chris. His daughter Meg is often bullied at school while his wife comes from a wealthy family and is a piano teacher by profession. The two most interesting characters are: the infant in the family who strives to be a supervillain and shows tendencies like people far above his age group; and their pet dog which is into smoking, drinking, and using sarcasm. Interestingly enough, it is always the anthropomorphic dog Brian who can understand what the infant Stewie says while the other family members are sometimes completely clueless in this regard.

There is a theory prevalent among the show’s fans that everything in the series happens in Stewie’s imagination. This can be the reason why the family keeps getting into ridiculous circumstances like fighting giant chickens and animals dating humans. It’s a ridiculously inventive, original and thematically rich show that must be seen by ardent TV show freaks. 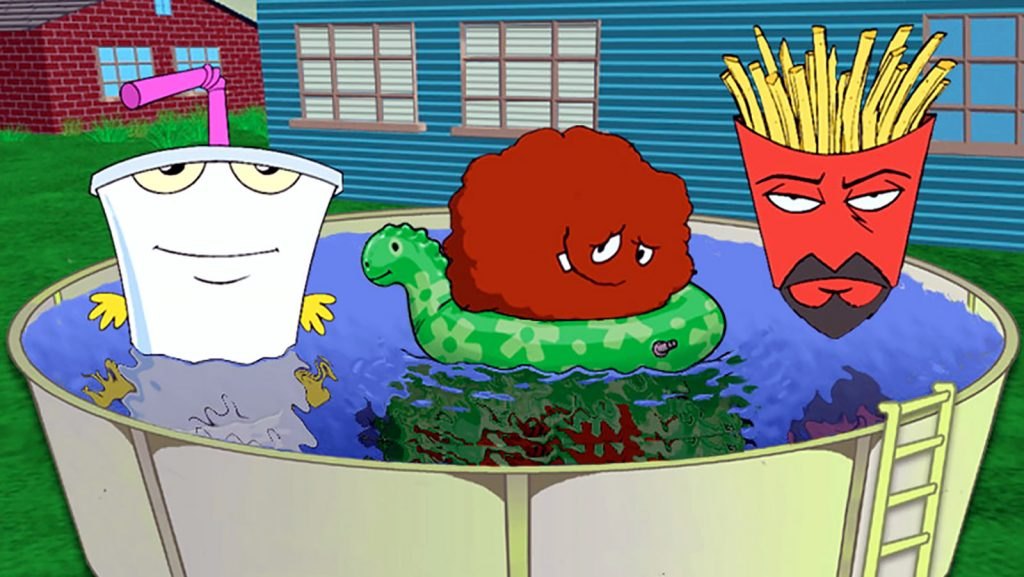 One of the most fascinating shows to be produced by Adult Swim, ‘Aqua Teen Hunger Force’ is a series about the surreal adventures undertaken by three anthropomorphic fast food products — a milkshake called Master Shake, a box of fries called Frylock, and a shape-shifting lump of ground meat called Meatwad. The show depicts their crazy adventures in trying to protect the earth from the strangest of threats. The supporting characters of the series have rather interesting names as well, like Oglethorpe and Emory, MC Pee Pants, Cybernetic Ghost of Christmas Past from the Future, and Dr. Wongburger. Most of the episodes end on a rather pessimistic note with any one of the characters dying. It is the bizarre nature of the show which sums up what, according to the showrunners, America mostly associates itself with: fast food and tasteless humor. 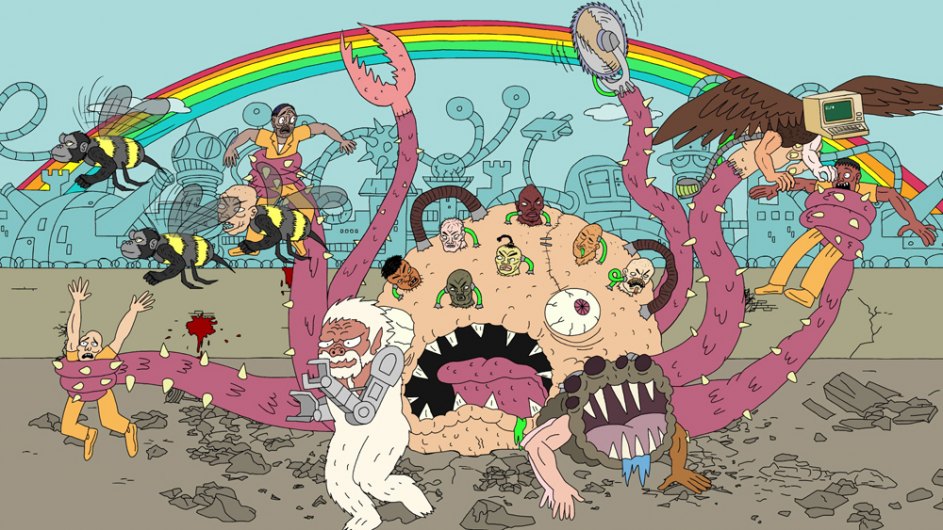 Set inside the eponymous prison, ‘Superjail!’ is a rather disturbing series full of blood, gore, and violence. The prison is located under a volcano and is well-known as the most notorious prison in the whole world. Here, prisoners are tortured regularly and there’s a lot of psychedelic bloodshed. The structure sometimes shifts abnormally without any proper explanation and gives the appearances of a dreamscape. The show fell under some heavy scrutiny throughout the years for its use of graphic violence and mutilation. ‘Superjail!’ broke new grounds regarding what is possible in an animated series. It is, without a doubt, one of the most innovative shows that Adult Swim has come up with. 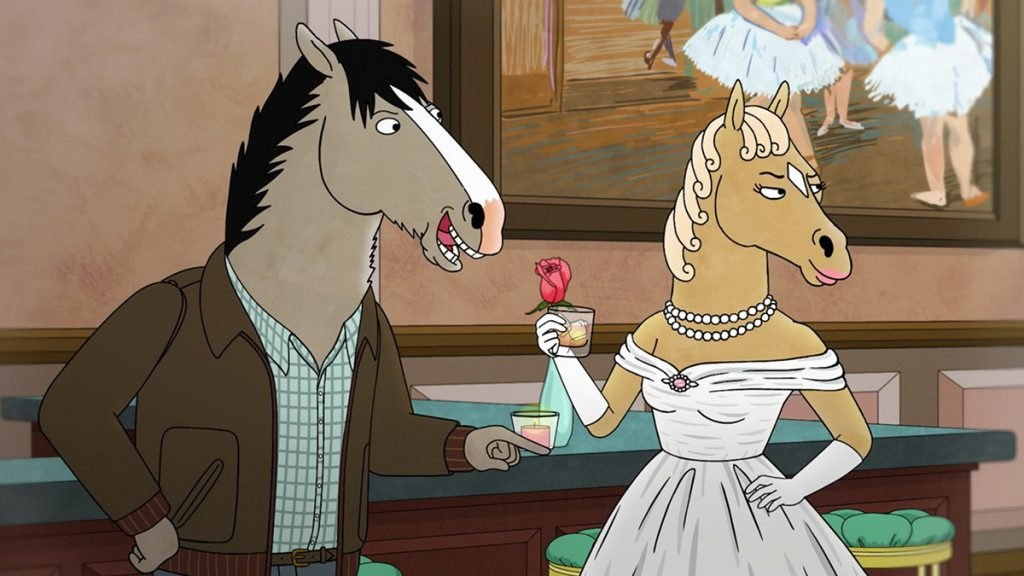 One of the best Netflix shows of all time, ‘BoJack Horseman’ is about its fascinating titular character who can be called the spokesperson of postmodernist humor in present-day television. He is an anthropomorphic horse who was once famous as a TV star and is now a complete nihilist who spends his days fooling around and drinking. The humor in the series constantly critiques modern consumerist culture and also points out how living for our work has alienated us from the joys of life. BoJack constantly breaks the fourth wall to address the viewers and even criticizes some of the practices of modern-day television shows which the series itself indulges in.