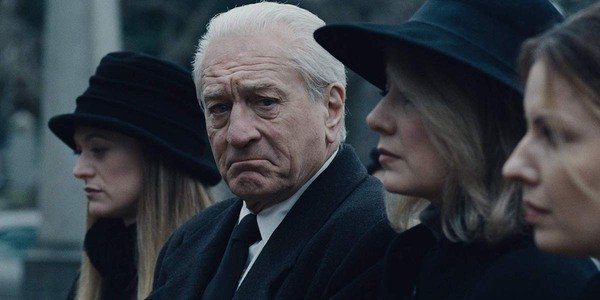 Martin Scorsese has given Hollywood some extraordinary movies. Although he has had to face the criticism of making mostly gangster movies, this is absolutely not true. Many of Scorsese’s movies deal with philosophical and theological ruminations. One only has to look at films like ‘Who’s That Knocking At My Door’, or ‘Silence‘. However, when ‘The Irishman’ was initially announced, fans could not be more excited, because they knew they would be getting a gangster epic from the maestro himself, and one that includes some of the most notable actors to have portrayed gangsters, namely Robert De Niro, Joe Pesci, Harvey Keitel, and Al Pacino.

However, over the sprawling three and a half hour movie, we have gotten a very different type of gangster film than one that we might have expected. It is a movie where Scorsese shows tremendous restraint, stripping the narrative of all sorts of vulgar excesses that are associated with the kind of lifestyle, and can be seen in his earlier films like ‘Casino‘ or ‘Goodfellas‘. The tone of the film is almost glacial, and one might even consider the fact that ‘The Irishman’ is a venture into Martin Scorsese’s “late style” as a director, wherein he uses the movie to contemplate matters of death, and life passing by.

If you are here, we assume you have seen ‘The Irishman’, and will be prepared for spoilers below. Moreover, if you have seen the movie, you might be wondering about the tone it ends on, which is almost ruminative in nature, as the plot seems to drag on long after the actual action has elapsed for the titular Irishman. Don’t worry, because we are here to answer all your questions as we explain the ending of ‘The Irishman’.

The story of ‘The Irishman’ follows Frank Sheeran who rises from the level of a truck driver stealing meat, to become a hitman for the Bufalino crime family. The movie chronicles how Frank grows close to Russell, the boss, and Bill Bufalino. Eventually, Frank is asked to carry out a hit for the family, when the interests of an individual happen to jeopardize another mob boss. Soon, Frank can be seen carrying out regular hits for the mob and dumping weapons.

The next step in his career comes when he grows close to Jimmy Hoffa, the union head. Hoffa was, at that time, as famous as Elvis Presley or the Beatles. One of the most powerful men in America after the President, the union leader had his share of mob ties. The film sees Frank growing closer to Hoffa, while he remains loyal to Russell. Eventually, Hoffa and the mob have a falling out, forcing Frank to choose sides. He sides with the mob and Jimmy Hoffa is made to ‘disappear’. In the meanwhile, over the course of the movie, we see several other historical events play out, and how they were tied to the mob. These include the Bay of Pigs invasion and the assassination of John F. Kennedy.

If you are familiar with Scorsese’s mob movies, you will see them ending on frantic and frenzied notes, mostly. One can recall how Henry Hill’s life starts to fall apart, following the almost claustrophobic scene where the events of one day are depicted with a chopper constantly tailing Henry. Or, you can think about how people get whacked in ‘Casino’ or how De Niro’s character gets away at the last moment. Whatever be the case, there is a lot of action tying the viewers in till the very end.

In ‘The Irishman’, all action ends technically with Hoffa’s body being discreetly cremated. What follows is Frank Sheeran’s period of guilt at having to live with the fact that he killed his friend and confidante. Scorsese painstakingly shows how every mobster and mafia member involved in Hoffa’s disappearance lead unglamorous lives in prison. The irony is that they have beaten the case for Hoffa’s murder, but their life of crime has caught up to them anyway, and they are all in prison for one thing or the other.

Even in prison, they do not enjoy the same luxuries that we saw Henry and Paulie enjoy in ‘Goodfellas’. There is not so much wining and dining here, as there is illness, old age, and arthritis in the case of Frank Sheeran. If you pay attention to Scorsese’s technique, he masterfully introduces each mob member in ‘The Irishman’ by relating how they died. Thus, the director establishes the idea of death looming at the end of a life of crime anyway. Obviously, most of the people introduced, die violently. However, some have to live with illnesses like prostate cancer, before passing away. The final moments of ‘The Irishman’ becomes a commentary on the problems of old age, be it Russell’s inability to have bread with wine, even though they get it delivered to them in prison, or Frank barely managing to arrange his medicines with shaking hands, without knocking the bottle of pills over.

Moreover, following Hoffa’s death, everyone close to Frank starts to die off. It begins with his wife, who passes due to lung cancer. Eventually, he is informed by agents that Frank Ragano, the mob lawyer who represented Jimmy Hoffa, has passed away as well. The agents chillingly go through the names of all of Frank’s friends and associates who have died already, and the Irishman’s isolation can be felt chillingly. The movie’s end sets the tone of giving things up, be it people or objects. Frank has to give up his car, which is said to be a bribe. He is also shown to be estranged from his daughters, who are afraid of their father and find him unapproachable.

In the final moments of the film, we find Sheeran completely alone. Even the enormity of his deed of assassinating Jimmy Hoffa seems to have diminished with time since the nurse attending to him does not even know who Jimmy Hoffa is. ‘The Irishman’ becomes a study of how time reduces us all to nothingness, and with its passage, we lose everything close to us. With this realization, comes Frank’s desire for redemption. He begins to communicate and pray with a priest, wherein we see he is plagued because he did not tell Hoffa’s family the truth about his disappearance, offering them false assurances and denying them the closure of loss.

Scorsese, who planned on becoming a priest before he became a filmmaker, expertly combines two of his most dominant cinematic themes, theology, and gangsters. We see Sheeran and the priest ponder on how to ask for forgiveness, and the validity of emotions behind the same. In the final moments, Sheeran is left alone by the priest as well, nearing Christmas, when everyone will be with their families. We understand the retired hitman’s desire to not be locked in or locked out, as he wants the door left slightly ajar, so he can still see other people, and perhaps for a sense of assurance that people will not forget about him, since his family has abandoned him, and he has lost all his friends. ‘The Irishman’ is a study of the loneliness that one must face, in the very final stages of their lives.

The ending of ‘The Irishman’ thus is a whimper more than a bang, because of Scorsese’s painstaking efforts to remove any sense of romanticization of the mob lifestyle. In fact, with the contemplation of death and decay, and the ending of mobs as we have known through movies, this just might be Scorsese’s way of bidding goodbye to the genre itself. If looked at logically, Scorsese has reached an age where he too must contemplate the finality of life, and the upcoming project he has lined up, ‘Killers of the Flower Moon’, is not a gangster film.

Moreover, Robert De Niro, who started acting in gangster movies, taking up the torch in a way from actors like James Cagney, has reached a mature age himself. It is through his emotive performance that he manages to evoke the right feelings in us, coming to terms with the passage and inevitable ending of life.

‘The Irishman’ perhaps marks the end of a well-loved genre as we know it, and perhaps what we are witnessing is a change of guards, with one of the cinematic greats stepping down. The movie remains one of Scorsese’s most evocative and perhaps greatest work, and if this is the note on which the director wishes to say goodbye, we can only thank him for his contribution to art as a whole, and cinema in particular.