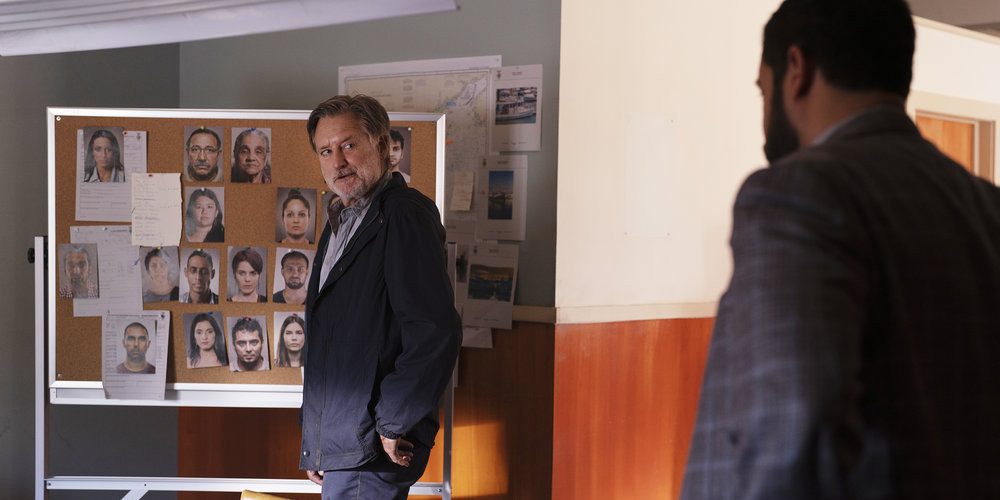 ‘The Sinner‘ season 4 comes to a conclusion by closing the curtain on the investigation of Percy Muldoon’s death. Ever since Harry found Percy’s dead body, new and baffling details about Percy and the Muldoons have come to light, but the most compelling twist comes in the eighth and final episode of season 4. Harry uncovers the real reason for Percy’s tragic demise and, in the process, contemplates his own future. There’s plenty to unpack in the ending of ‘The Sinner’ season 4 episode 8, and without wasting any more time, let’s dig into it! SPOILERS AHEAD!

‘Part VIII’ is the eighth episode of the ‘The Sinner’ season 4 and follows Harry as he tries to connect the human trafficking ring to Percy’s death. Harry goes back to the boatyard only to find the ship burned down on which the immigrants were hidden. He then speaks with the yard’s owner, Don, who reveals nothing of consequence. Don informs Raskin, and Harry is once again apprehended. However, on their way to the station, Raskin tells Harry that the ballistics report came in and proved that Novak shot Brandon, thus, crediting Harry’s theory about the trafficking ring.

The police release Mike Lam, but the Portland Detectives drop the racket’s investigation on orders from their superiors. Harry tells Raskin to track the location of an unknown number he found on Novak’s phone. Following the directions, Harry arrives at the phone booth outside the Muldoon residence, where he spots the Lams meeting with the Muldoons. Harry and Raskin look through the Lam and Muldoons’ records and find a common connection. They learn that the Lams purchased a piece of land from the Muldoons a couple of years ago for very little money, and one of their fishing permits was also transferred to the Lams.

Harry investigates the piece of land, which is a small rocky island just outside Riverport. On the island, Harry finds a marked grave and deduces that it belongs to Mike’s elder son, Bo Lam. Harry tries to learn the truth about Bo’s death from CJ but to no avail. Harry then confronts Sean, who finally breaks under the pressure of keeping the secret and confesses to covering up Bo’s death. He agrees to testify and reveals the circumstances of Bo’s death and how they affected Percy. Thus, the interconnected truth about Bo and Percy’s death is uncovered, and Harry’s time on Hanover Island comes to a wrap.

The Sinner Season 4 Ending: How Did Percy Die?

In the end, in a series of flashbacks, we learn that Bo Lam, who worked for the Muldoons, was using their boats and traps for fishing to support his family. He was operating independently, and the Muldoons felt he was stealing from them as their yields were consistently growing lower. Sean, Colin, and Percy confronted Bo on Colin’s boat. A physical fight broke out between Bo and Sean, and Percy tried to use a gun to stop them. However, she ended up pulling a trigger leading to Bo’s death.

The Muldoons and Lams covered up Bo’s death, but Percy kept feeling guilty about it. Moreover, her family faced an economic crisis from the costs of covering up the murder. Sean and Colin turned to human trafficking to keep themselves afloat. After learning how her mistake had poisoned her family’s ethics, Percy began to lose grip on her emotions. She could no longer bear the burden of Bo’s death but also couldn’t reveal the truth as it would doom her family. Therefore, Percy decided to escape the guilt by ending her life.

Does Harry Die? Do Harry and Sonya Reunite?

At the start of the season, Harry meets Percy and sees her jumping off a bluff all within the span of a day. As Harry investigates Percy’s death, it becomes evident that she died by suicide. Thus, Harry becomes more emotionally involved in the investigation, as he and Percy are dealing with the same issue: the guilt of being responsible for a person’s death. Therefore, after solving the case of Percy’s death, Harry must deal with his own demons.

Harry tries to call Sonya but is only able to reach her voicemail. The couple had a falling out due to Harry’s obsession over Percy’s death. With the case behind him, Harry tries to bridge the distance between him and Sonya, but it appears that he failed. In the end, Harry returns to the bluff from where Percy jumped off. He has a conversation with Percy, who is a fragment of his imagination. After piecing together the reasons for Percy’s suicide, it is implied that Harry introspects his own reasons to be alive.

In the final shot, we see Harry on the edge of the bluff before cutting to black. While some viewers might interpret the scene as harry jumping off the edge, similar to Percy, that is highly unlikely. Earlier, during his conversation with the vision of Percy, Harry agrees that he sees another way of escaping his past and the guilt connected to it. Therefore, it is almost certain that Harry does not die at the end.

What Happens to the Muldoons?

After Sean confesses to covering up the murder of Bo Lam and aiding in human trafficking, the Muldoons find themselves in hot waters. Sean voluntarily speaks with the police and divulges the details of the operation. At the same time, Colin is also brought in for interrogation. Although the brothers’ fate is left open, they will likely end up in jail and pay for their crimes. The same is hinted at during Meg and Harry’s final conversation.

On the other hand, Meg is devastated by the tarnished image of her family and seeks comfort by trying to reconnect with Percy. She seeks out Emiliana, and it is implied that Meg picks up Percy’s beliefs in the gods of nature. It is possible that, like Percy, Meg sees spiritual activities as a method of atoning for her involvement in the crimes and overcoming the guilt for Percy’s death.