Where Was VH1’s Let’s Get Merried Filmed? Who is in the Cast? 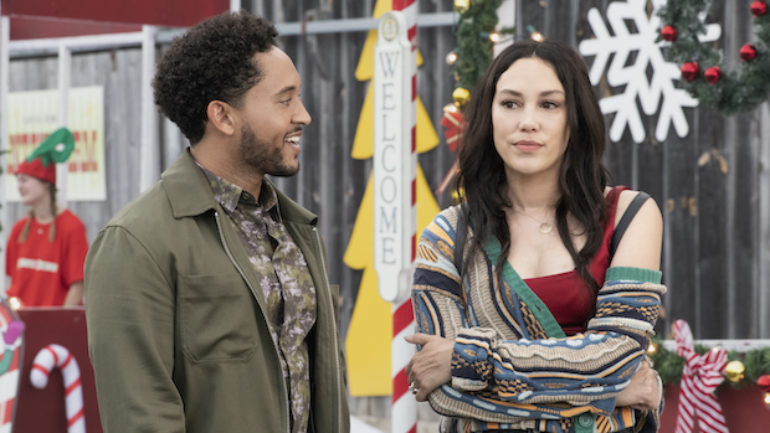 VH1’s ‘Naughty Or Nice’ is a lineup of fun, edgy Christmas movies to make the holidays enjoyable for the viewers. On that list is ‘Let’s Get Merried,’ an entertaining romantic comedy directed by Veronica Rodriguez. The movie revolves around Zoe, who hates Christmas and everything related to it. The dread she feels during the holiday season gets intensified when her ex-boyfriend decides to get married on Christmas. Out of spite, she decides to randomly get married before her ex does, that too to someone she’s never met before.

Zoe thus takes her group of female friends AKA “The Coven” on a fun-filled bachelorette weekend in a Christmas-themed adventure park. What is originally planned as a trip full of drinks, dance, and memories suddenly gets a pleasant twist when Zoe meets Finn, who himself is recovering from a bad breakup. Sparks fly as they end up finding something meaningful together in the holiday season.

Set against the beautiful backdrop of a Christmas-themed adventure park in California, ‘Let’s Get Merried’ is an exciting tale of female friendships, Christmas miracles, and finding love unexpectedly. If you too are curious to know about the gorgeous places where the movie was shot, here is everything we can tell you.

Though the storyline is set in California, ‘Let’s Get Merried’ was filmed in Ontario, particularly in its capital Ottawa. According to sources, production commenced on August 9, 2021, and was wrapped up on August 21, 2021. The province is largely covered by all the major inland waterways and has a diverse geography that ranges from the Canadian Shield to agricultural fields, as well as thick, wintery forests. These provide a variety of backdrops for filming, thus making Ontario a favorable shooting location.

Considerable tax concessions and state-of-the-art production technology are also some of the benefits of filming in Ontario. TV shows and movies like ‘Schitt’s Creek,’ ‘Chucky,’ ‘The Shape of Water’ and ‘RoboCop’ have been filmed in the province. Now, let’s have a closer look at where exactly ‘Let’s Get Merried’ was filmed.

With lush forests and the beautiful eponymous river, Ottawa is an ideal filming location due to its landscapes and climate. Major portions of ‘Let’s Get Merried’ were filmed in the city, popularly called the Christmas Movie Capital of the World. The crew had a slightly tough time creating the feeling of Christmas during the humid monsoons in Ottawa. After all, it is difficult to pretend that its cold when sweat messes up the makeup. However, the team was able to complete filming successfully due to their hard work, resulting in some beautifully shot scenes.

A lot of Christmas movies are frequently lensed in Ottawa, given its snowy winters and charming heritage buildings. ByWard Market, Carleton Place, Almonte, and the Cumberland Heritage Village Museum are some of the most popular spots for filming in Ottawa. A few of the holiday movies that were filmed in the city are ‘A Christmas Village Romance,’ ‘The Rooftop Christmas Tree,’ and ‘A Cheerful Christmas.’

Mishel Prada plays Zoe, a holiday hater who decides to go on a bachelorette trip with her girlfriends and get married to a random stranger. Opposite her is Tahj Mowry, who plays Finn – a handsome stranger who unforeseeably connects with Zoe. Prada is known for her portrayal of Hermosa Lodge in the hit television series ‘Riverdale,’ as well as Emma in the drama series ‘Vida.’ Meanwhile, Mowry’s notable works include the TV shows ‘Smart Guy’ and ‘Full House.’