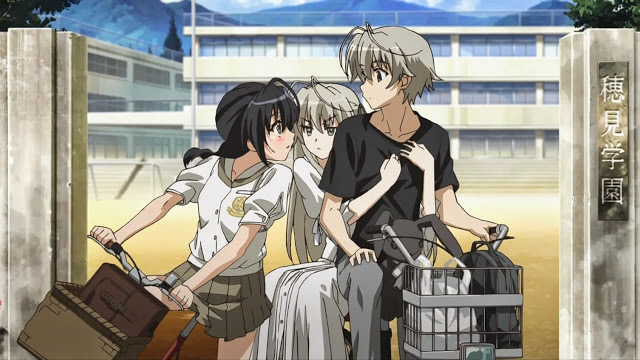 All of the sex scenes and intimate moments between the characters have meaning behind them and are not for the sole purpose of entertaining the viewers. Each arc of the show is separated by different stories that involve a different girl and only somewhere around the end, a link is created between all these individual arcs. Clearly, the story goes through a lot of changes but one thing that goes through major transformations is the characters.

Speaking of the characters, despite their cliched outlooks, all of them change over time and the emotions that feel are very realistic. What makes this aspect even better is the amazing animation of the show. “Studio feel.“, also known for shows like ‘‘Kiss X Sis‘, has done a great job with the fluidity and detailing of the backgrounds and characters. Even the Chibi art that is used at the end of most episodes is quite hilarious. Overall, just because of all the Ecchi in the anime, I believe most viewers just assume that it is nothing more than Hentai and that’s probably the reason why it has been rated so low. But I would certainly recommend this to anyone who has the slightest interest in shows that portray human relationships.

Yosuga no Sora Season 2 Release Date: When will it premiere?

‘Yosuga no Sora’ season 1 premiered on October 4, 2010 and came to an end on December 20, 2010. During this span, it aired a total of 12 episodes with each one of them being 25 minutes long. Apart from this, unlike most other anime shows, this one has no spin-offs, special episodes, OVAs or side-story seasons. The ending of season one lacks a proper conclusion and leaves behind many unanswered questions. Due to this, many viewers were at least expecting a follow-up OVA if not a whole season. But now, almost a decade has gone by since its release and even the possibility of getting an OVA seems very less likely.

Even the overall rating that ‘Yosuga no Sora: In Solitude We Are Least Alone.’ has received on most well-known platforms is average which shows that though the anime was quite popular back in the day, most fans did not enjoy watching it. From what it looks like, ‘Yosuga no Sora: In Solitude We Are Least Alone.’ was just another one of those shows that are released for the sole purpose of promoting the light novel they have been adapted from. So as of now, nothing really seems to be in favor of the anime’s renewal. Even then, if we get any news regarding ‘Yosuga no Sora’ season 2 release date, we will surely update it right here in this section.

The bad news for international viewers who prefer watching anime in English is that the English dubbed version of this show has not been released. And now that so many years have gone by since it premiered, the possibilities of getting one seems low. Even then, you can still watch  ‘Yosuga no Sara: In Solitude We Are Least Alone.’ with English subtitles on Crunchyroll.

Haruka and Sora Kasugano have been gone for too long and now they are coming back home to a place that is full of both negative and positive memories. Though they are moving to their childhood home and will be living with their grandmother, the whole idea of moving back to the countryside is just a bitter feeling as they are simply being forced to do so just because their parents recently passed away in a horrible car accident. They receive the warmest welcome from old friends Nao Yorihime and Akira Amasume who are joined by a newcomer Kazuha Migiwa.

But this feeling of warmth and peace is only temporary as their old suppressed feelings and memories start to resurface. Old secrets that were not supposed to unshackle, begin to come back to them and influence them in ways they had never imagined. ‘Yosuga no Sara’ is based on a visual novel by Sphere that goes by the same name and takes you on a journey of the two main characters who learn the power of lost memories and true love along with lessons on one’s morality and what it means to be socially acceptable.

Akira Amatsume is one of the main characters of the series who lives alone in the sacred plot of a shrine. She has an extremely cheerful personality and is often contagious to those who stay with her. She is also very innocent and more or less like an angel. Everyone loves her company because of how lively she is but deep inside, behind her cheerful outlook, she is very depressed. She tries to hide and suppress her true feelings. She has more of childlike appearance with short brown hair and dark brown eyes. Out of all the other girls in the series, she is one of the shortest and is considered to be very cute.

Haruka Kasugano is the older brother of Sora Kasugano who has a very gentle and innocent appearance. He has short silvery hair with black eyes and looks a lot like his own sister. His skin is pale in color and he stands close to 5 feet 7 inches tall. Just like his sister, he is also considered to be very good looking. Haruka is a very likable guy who easily manages to make his relationships last for long periods of time. He is mentally mature and at the same time, he also has this sweet childishness to him. He is also quite popular in the village as his grandfather was once a well-known doctor there. When it comes to his character, the anime is completely loyal to the game and depicts all his relationships properly.

Sora Kasugano is the twin sister of Haruka Kasugano who, like him, has pale skin, silvery hair, and black eyes. She’s like the spitting image of her brother and has this perfect doll-like appearance. She is much shorter than her brother and even compared to other girls in the series, she appears to be very fragile. Unlike her brother, she is not too social and keeps to herself most of the time. She feels very attached to Haruka and feels lonely when he is not around. Later, she even starts feeling jealous when she sees him with other girls. This leads to the initial development of an incestuous relationship between the two.

Kazuha Migiwa is the daughter of a powerful magnate who looks like a princess and is known for her stunning good looks. She has long black hair and beautiful deep blue eyes. Her parents keep traveling to new places and because of this, she has learned to be self-dependent at a very young age. She gets anxious a bit too easily but still manages to be gentle and kind to everyone around her.

Nao is another main character of the series who treats Haruka like her own younger brother. She is one of the most mature adult-like characters of the anime and has short black hair that she holds back with hairpins on each side. She is a great swimmer and is also very intelligent. She expresses sisterly love towards Haruka but deep inside, she has more intimate feelings for him.