There are certain aspects of ‘The Irregular at Magical High School’ that make it slightly controversial and that’s the reason why it has received a lot of mixed reviews. Firstly, it has an overpowered protagonist who is simply a genius when it comes to combat. He surpasses the abilities of almost all of his opponents with ease and his battles with every other character have a very predictable result. Another major issue with the anime is that it slightly hints an incestuous relationship between two of its characters which, for obvious reasons, makes many viewers uncomfortable.

Set in the year 2010, the city of Japan has been taken over by the kingdom of Britannia which possesses a mysterious weapon. Even after making numerous efforts to overthrow the rule of this kingdom, Japan fails to be a free nation. Soon, the place is renamed as Area 11 and only a few rebel forces remain who are still willing to battle against the Britannian rule. When a high school kid named Lelouch gets caught in a crossfire between the two opposing parties, a mysterious girl appears and grants him the “Power of Kings”. This is when he sets out on a journey to not only use his newly acquired powers but to formulate the ultimate strategies to bring peace to his nation.

Unlike most anime on this list, ‘Code Geass‘ is not set in a school but it does feature a high school kid as its protagonist. Just like ‘The Irregular at Magical High School’, the main character of ‘Code Geass’ is extremely overpowered and is also a brilliant strategist. He also has a very strong sense of purpose and when he needs help, he is guided by a female magical character. If you like watching well-thought-out war anime shows, ‘Code Geass‘ should certainly be on your watchlist. 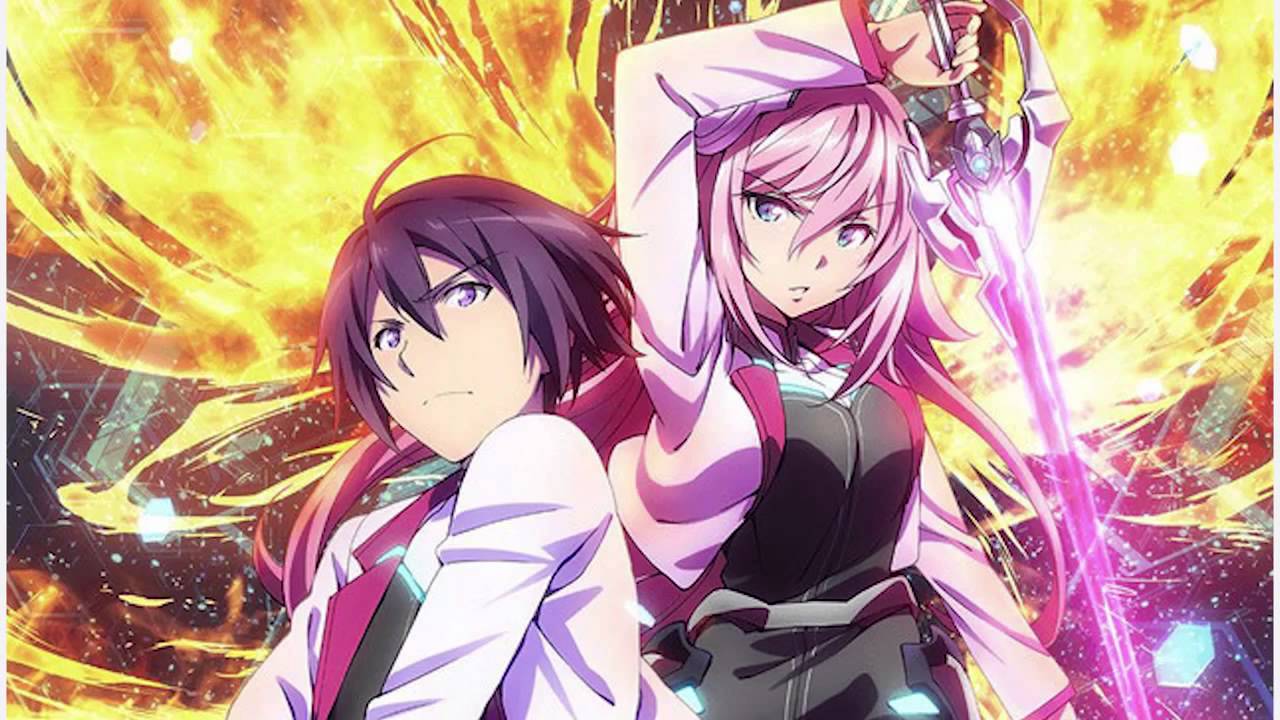 In the mysterious floating city of Asterisk, a very prestigious academy known as Seidoukan exists. This Academy is the home for many youngsters who possess supernatural abilities and are known to be the Genestellas. At the Academy, they train rigorously in order to prepare for a festival where they battle against one another. Ayato Amagiri is one of the few new recruits of the school who finds himself against a girl named Julis; his life will never be the same again.

A magic high school is again a common theme between ‘The Asterisk War‘ and ‘The Irregular at High School’. Apart from all the action, the two series also bring in elements of other genres including romance and sci-fi. Harem is also a common recurring theme as the protagonists are surrounded by young beautiful women. ‘The Asterisk War‘ is the perfect show if you’re looking for something that has a balance of comedy, action, romance, and some Ecchi. 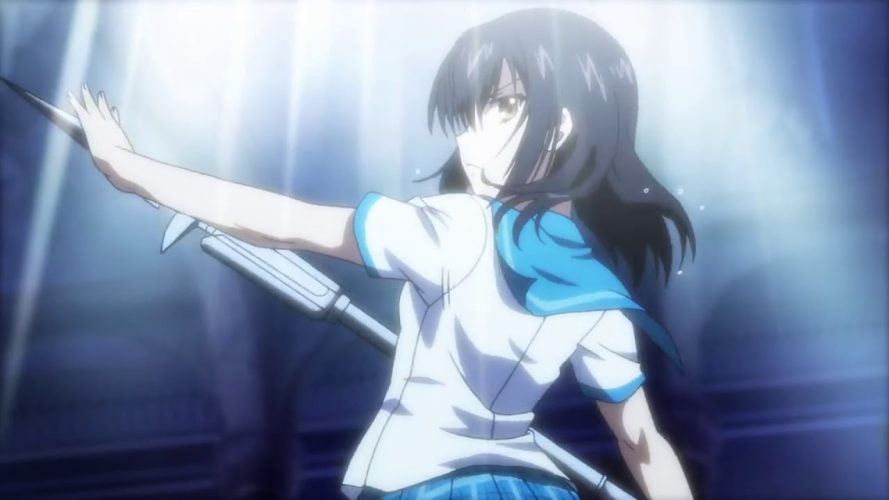 Kojou Akatsuki’s life turns completely upside down when the strongest known Vampire releases her spirit on him and makes him the Fourth Progenitor. Soon, the government also finds out about this and to stop all of it from happening, it is forced to use a very powerful sword known as Shaman. But it turns out that it is no ordinary sword and is actually an apprentice who goes by the name of Himeragi Yukina. Kojou will now have to face her but everything is not as simple as it seems.

The first major thing that’s common between both of the shows is that they’re set in a futuristic world that has an abundance of magic. The male protagonists have similar personalities and the girls around them are mysteriously drawn towards both of them. And of course, just like pretty much every show on this list, even this one has a high school setting. ‘Strike the Blood‘ is a must-watch if you were entertained by the whole mysterious atmosphere and well-developed characters of ‘The Irregular at Magical High School‘. 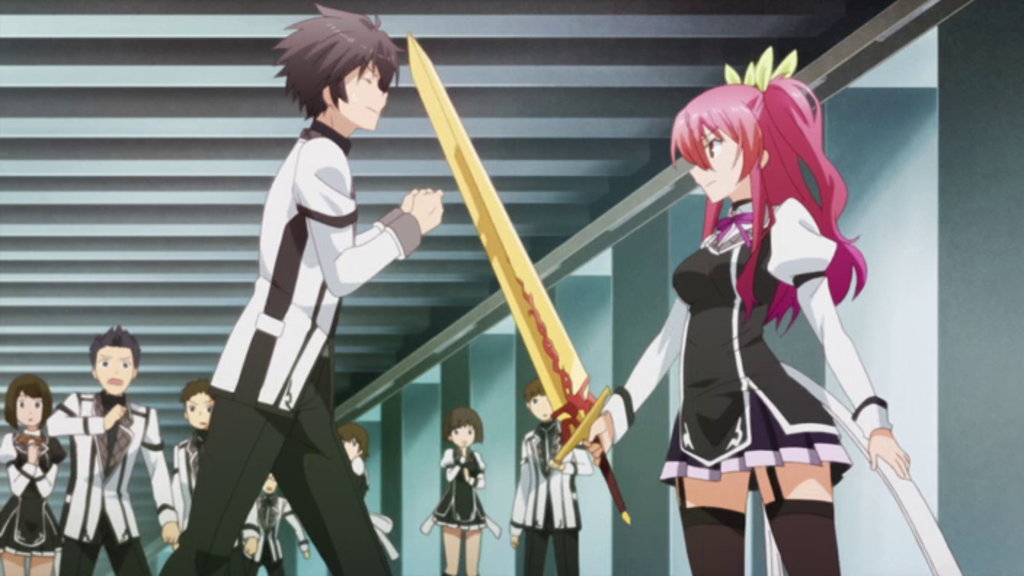 Ikki Kurogane, the protagonist, attends a well-known academy known as the Hagun Academy. Here, he trains to be a great mage Knight someday. But his biggest problem is that unlike most other kids at school, he seems to be a terrible Knight and is labeled as the “Worst One” because of his terrible grades. In order to pass the year, he’ll have to fix all of this soon. A new ray of hope shines on him when a new headmaster, Kurono Singhji, joins the school and offers him a second chance to revive his chances of graduating. She tells him that if he’s able to win the “Seven Star Sword Festival”, his grades will be ignored and he will certainly graduate. When Stella, a magical princess, joins the school, Nikki’s chances of winning seemingly get lower. But winning now is a lot more than just graduating for him as the one who gets to win will actually get to enslave the other for life.

The first major similarity between ‘Chivalry of the Failed Knight‘ and ‘The Irregular at High School’ is that both of them are set in a magical school. Furthermore, even the main characters, Ikki and Tatsuya, struggle to get good grades at their respective academies. Both of these characters are also quite cool and despite being the lowest ranked magicians at their schools, they don’t really seem to care. In both the cases, they have to face another student who is the polar opposite of them and is actually the best student at the academy. 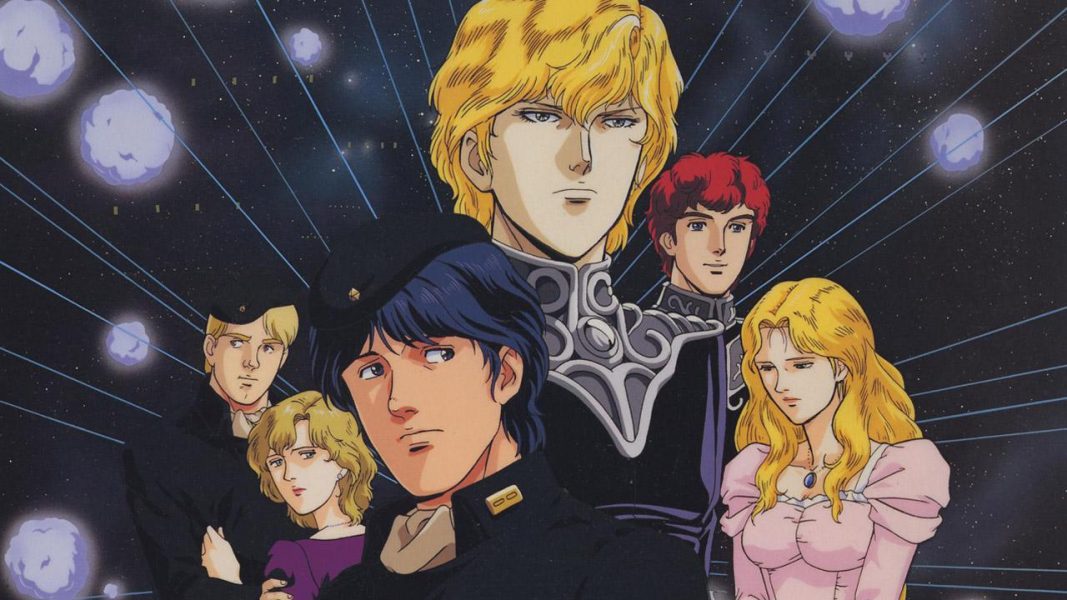 In a very distant future, mankind has moved out of Earth and has established itself on several other planets. But everything is not at peace as the Galactic Empire, led by the Goldenbaum Dynasty, and the Free Planets Alliance are at war. The anime mainly revolves around two main protagonists who have contrasting personalities but are still united by their common political struggles and battles. And in the end, both of them will have to face the atrocities of war in one way or the other.

‘Legend of the Galactic Heroes‘ does not have a high school magical setup of any kind but what it shares with ‘The Irregular at Magical High School’ is its futuristic world theme where a war has ensured because of class discrimination. Both the shows also explore the political aspects of their worlds and depicts how it impacts the lives of the main protagonists. On the surface, the two shows may not be all that similar but at the core, they are both well constructed with deeply fascinating characters and political references. 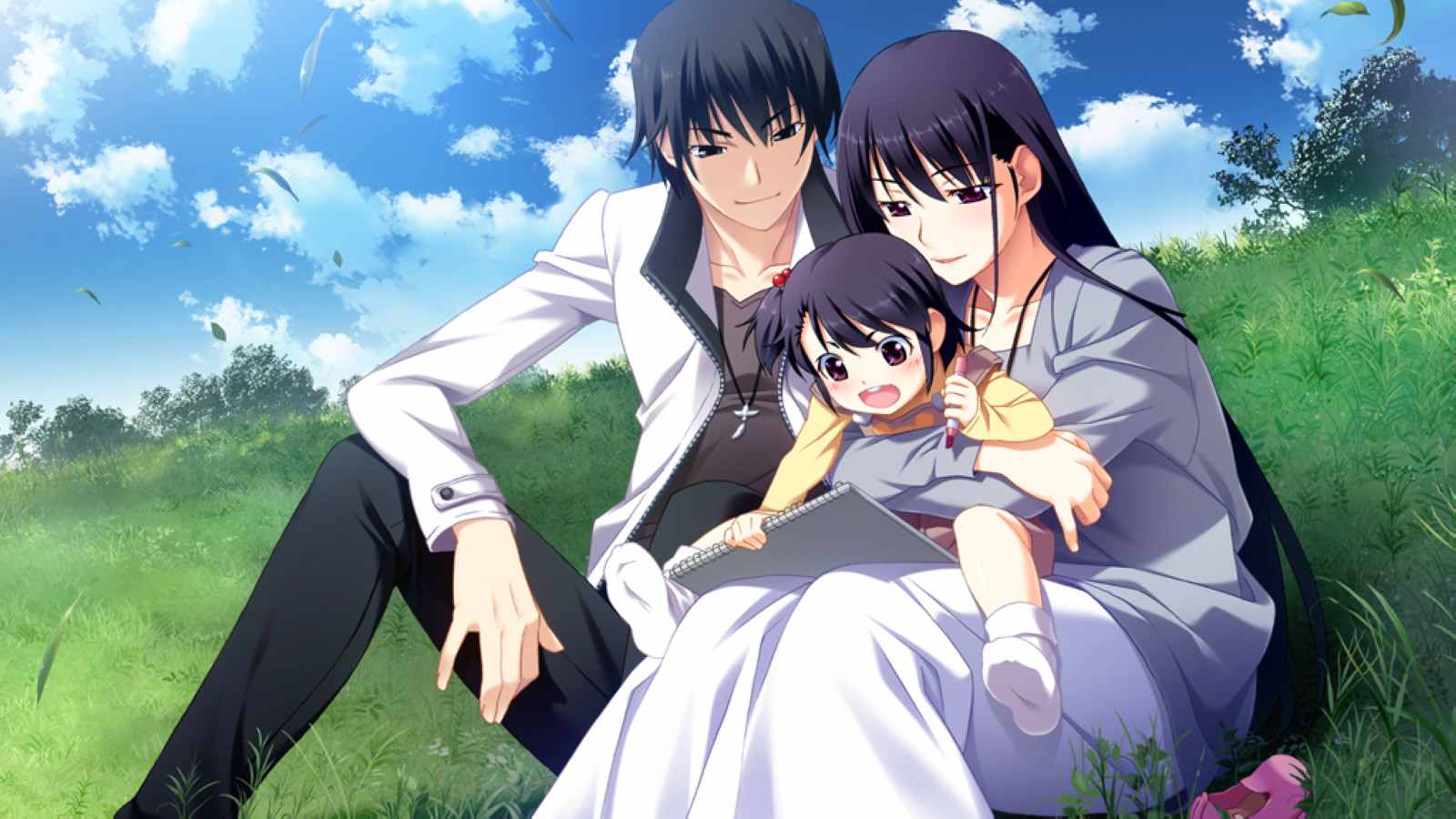 ‘The Fruit of Grisaia‘ centers around a school known as the Mihama Academy, where students are completely secluded from the outside world to make sure that they are able to focus on whatever that is being taught. The anime revolves around the lives of 5 girls who seem to be doing pretty well until one day, Yuuji Kazami, the first male in their group, enters their life and reintroduces them to the demons of their past.

‘The Fruit of Grisaia’ has a darker undertone compared to ‘The Irregular at Magical High School’. But both of them have a uniquely skilled male protagonist who carries a cold demeanor and is serious about what he intends to accomplish. In both shows, the theme of harem has been slightly touched upon without the involvement of Ecchi. ‘The Fruit of Grisaia’ is the perfect anime for someone who is looking for a psychological thriller set in a high school. 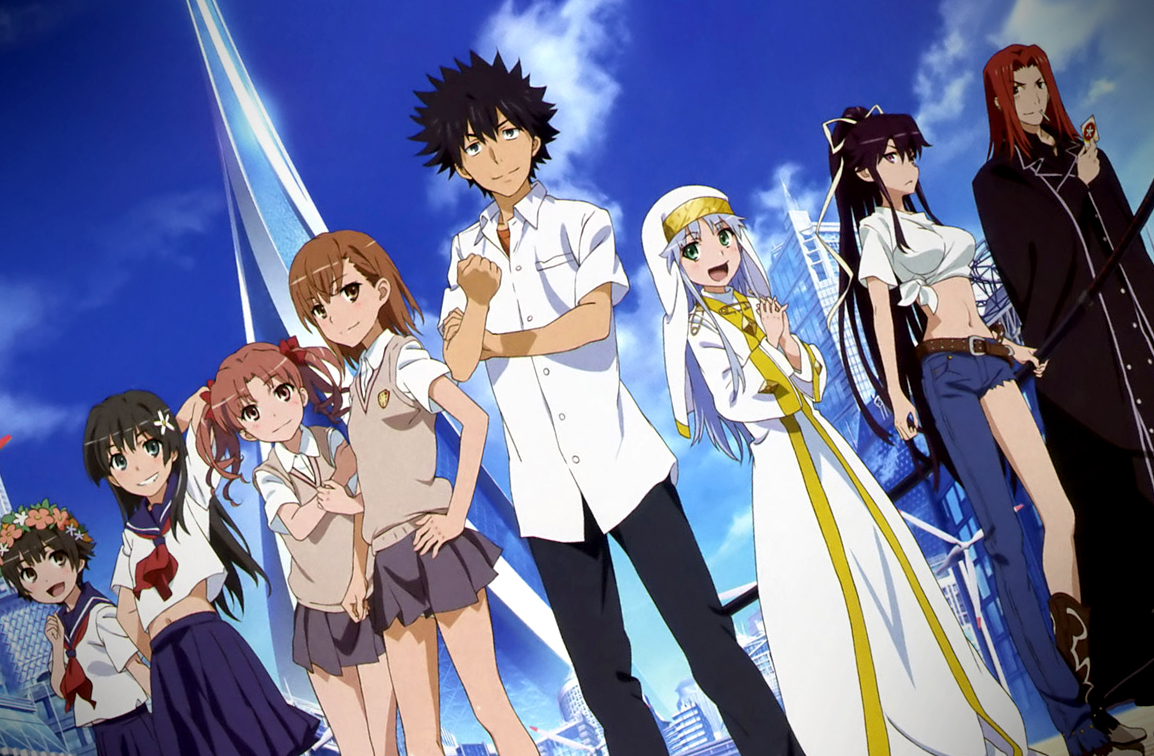 The Academy City is way ahead of the rest of the world when it comes to technology and it also accommodates some of the most brilliant young minds in the world. The city has a very prestigious academy where young boys and girls learn to develop their psychic abilities. Amongst these students is the main protagonist, Touma Kamijou, who is the lowest ranking psychic there. But he possesses one unique ability, called “Imagine Breaker”, which allows him to deflect the magical abilities of all the others. He lives an easy laid back life and does not care about anything until one day, he runs into Index Librorum Prohibitorum. The girl is being chased by some of the most dangerous organizations of the world and it’s on Touma now to protect her.

Again, the biggest similarity between the two anime is that they’re both set in schools that are made for students with special abilities. Set in a futuristic world, both have protagonists who are extremely strong in their own unique ways but are not really able to perform too well in school. Being extremely laid back and disinterested, a sense of purpose is evoked in both of them when they are forced to fight for someone else. ‘A Certain Magical Index‘ is more like a lighter version of ‘The Irregular at Magical High School’ and is easily one of the best magic sci-fi anime out there.