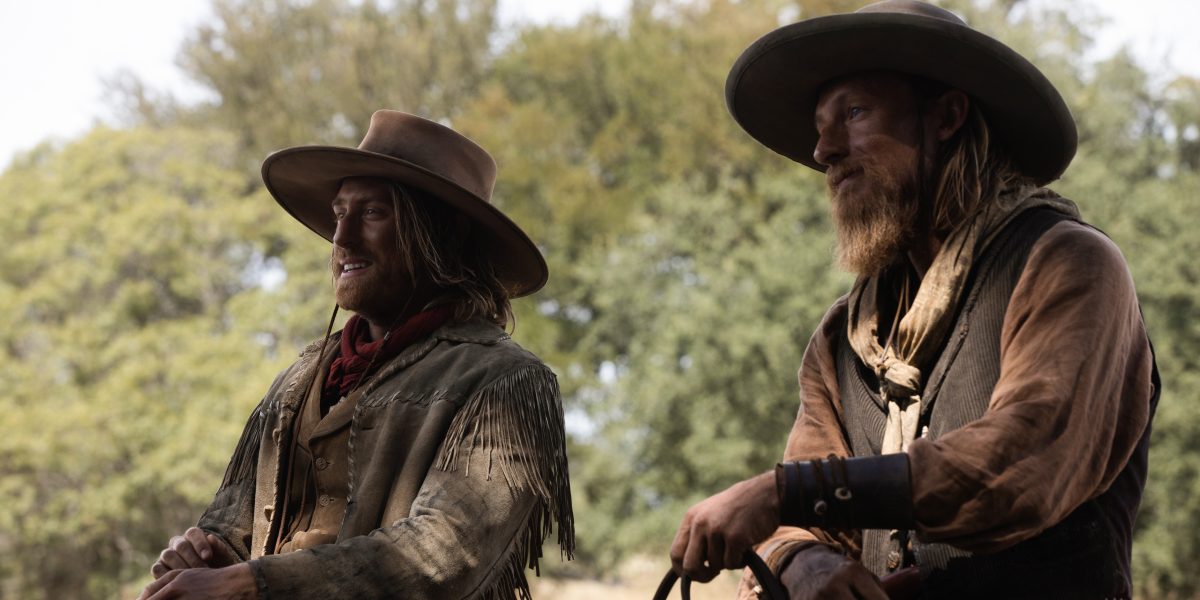 ‘1883’ serves as a prequel to the Neo-Western drama series ‘Yellowstone.’ It follows the first-generation Dutton ranchers as they travel across the Great Plains in search of a new home. The parent series is set in the modern-day and is known for its immersive portrayal of the cowboy culture.

It features many real-life cowboys, such as co-creator Taylor Sheridan and actor Forrie J. Smith. Therefore, it is natural for viewers to wonder whether the prequel series also features any real-life cowboys among its cast. We also got curious about the same and decided to dig into the matter. Here’s everything we learned in that regard!

In ‘1883,’ cowboys and Pinkerton Agents Shea Brennan and Thomas are leading a group of immigrant travelers across the Great Plains and towards Oregon. Among the caravan are James Dillard Dutton and his family comprising wife, Margaret, and children, Elsa and John. Shea and Thomas also employ a few local cowboys from Fort Worth, Texas, to aid in their journey. Outside of this core group, the travelers mainly comprise inexperienced European immigrants who are inadept at horseriding. Therefore, the number of cowboy characters in the series is only a handful.

The show’s cast is led by actor Sam Elliott who is often described as a Hollywood Cowboy due to his performances in numerous Western films and shows. Although years of experience playing cowboy characters is sure to give the actor an edge, Elliott isn’t an actual cowboy in the traditional sense of the word. Real-life couple and country singers Tim McGraw and Faith Hill play husband-wife duo James and Margaret Dutton. Both actors also do not have any prior experience in horse riding, herding, or related cowboy activities, at least not professionally.

The same is true for other cast members such as LaMonica Garrett (Thomas), Eric Nelsen (Ennis), and Isabel May (Elsa Dutton). The show’s makers organized a “Cowboy Camp” to help the actors prepare for their roles and obtain the necessary cowboy skills to make their performances believable. It is safe to say that all the cast members have excelled in that regard.

Actor James Landry Hébert appears as Wade, one of the cowboys hired by Shea and Thomas. Hébert grew up on an Indian Reservation, and a quick look at his Instagram shows that he indeed possesses some experience as a cowboy. Actor Alex Fine who plays Grady, is a professional trainer and enjoys bull riding in his spare time. Therefore, it can be said that Fine also possesses some cowboy chops in real-life. Aside from the two of them, the show also employs several stunt performers and coordinators with cowboying experience, and some of them appear as extras in some scenes.

So, all in all, when it comes to real-life cowboys in ‘1883,’ it is pretty much a mixed bag. The main cast certainly has done a lot of hard work to gain the required experience for their roles. They deliver believable performances with the help of trainers and a stunt team who have experience in the cowboying circuit. Moreover, the show’s filming takes place at a real-life ranch, so we’d imagine there’s no shortage of real-life cowboys to appear as extras or supporting characters as the need arises.