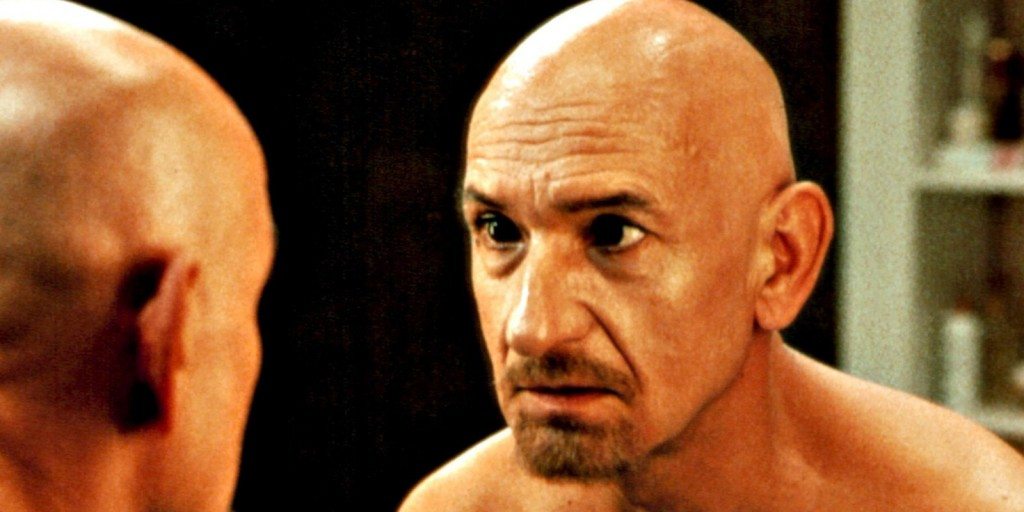 The first time I saw Ben Kingsley onscreen, was as Gandhi in the title role of Richard Attenborough’s massive biographical film. Virtually overnight the little know actor became an internationally known artist, I cannot call him a movie star because that did not happen till the Nineties. For his performance in Gandhi (1982) he won the Academy Award for Best Actor, the film won eight in total, a love in for the Mahatma.

He is a great actor, no question, and his great work through the years bears that out. Nineteen years after Gandhi (1982) he gave an alarming, intense performance as a mob member whose very name Strikes fear. As Don Logan in Sexy Beast (2001) he was terrifying, and for this should have won his Oscar. We had not seen him like this before, an electrically charged wire of a man, even when still, his eyes burning holes into people brought a genuine fear to the screen.

Throughout his career he has often portrayed characters that become the conscience of the film, Schindler’s List (1993) or Dave (1994), or powerful men brought down by their own beliefs, as he was in The House of Sand and Fog (2003). When we see his name in a film, there is an expectation of excellence that is naturally implied, expected really. And most of the time he delivers. Here is the list of top 10 Ben Kingsley movies that showcase his acting talent. You can watch some of these best Ben Kingsley movies on Netflix, Hulu, or Amazon Prime.

As the fearsome Don Logan, the actor is like a heat seeking middle of a criminal, easily finding weakness and using it against those in opposition of him. We see him first from behind, head bald, walking through a small airport with confidence and purpose. He has a job to do and he is going to stomp over anyone in his way. His body coiled like a rattlesnake, there is no question he is dangerous, just look at the absolute terror his very name brings! Kingsley is electrifying and it is for this ferocious performance that he should have won his Oscar. I remember being stunned by the performance, I just could not believe it.

As Stern, the meek, ever watchful accountant who believes in Oskar Schindler, he is very much the conscience of Steven Spielberg’s, masterful film. Head bowed among the Nazis, walking quietly but taking it all in, he then delivers news, good or bad to Schindler. The two men become unlikely allies, and over time friends. Schindler spends the fortune he makes on saving the eleven hundred Jews who work for him. It is Stern who reminds Schindler of the lives he saves, but it is Stern who tells him, “the list is a perfect good, the list is life.” When they part ways, Schindler now a fugitive for having been a Nazi Stern tells him, “He who saves one life, saves the world entire.”

Kingsley was beautifully cast as gangster Meyer Lansky, best friend of Bugsy Siegel portrayed here brilliantly by Warren Beatty. The brains behind the mob, Lansky disagreed with his volatile friend going to Hollywood, knowing he will get caught up in the fast lane. Watching Siegel become fascinated with movie stars and then his vision in the desert of Las Vegas, Lansky grows concerned as the project spirals out of control financially. Finally it is Lansky who orders the hit of his best friend because Bugsy has grown careless, and even friendship has its limits. Quietly powerful, projecting power with little movement, Kingsley was superb.

As Behrani, a man who has fled his war-torn country where he walked the halls of power, now holding down two menial jobs to support his wife and son, Kingsley is quietly remarkable. When he purchases a home up for auction he has no idea the house was sold by accident really, unfilled paperwork took it from its owner, a desperate young woman who wants her house back. Kingsley brings a ruthless dignity to his performance creating a man not used to backing down or giving in to anyone, who in seeking a better life in America has lost everything. His arrogance brings about the downfall of his entire family. Heartbreaking but unquestionably brilliant.

Let me be clear, I admire his performance in this film, he does wonders with what he is given to work with. The Mahatma portrayed in this film speaks in platitudes, as though every word should be inscribed in stone. Anything remotely controversial about the man, those things that make him human, are left out, for fear of damaging the Saint the director is setting him up to be. Kingsley gives a clear eyed, passionate performance as a man who seeks the freedom of his people from British rule. Oh that the director had allowed him to be human. Perhaps then he would deserve that Oscar.

Working with the great Martin Scorsese for the second time, Kingsley portrays the great French silent filmmaker Georges Melies. Working at a small toy booth in the French train station, he discovers a little boy, and the two heal one another slowly as the child discovers who the old man is. There was a time Melies was the greatest filmmaker of the silent era, his imagination overflowing with fantasies to put on the screen. In a marvelous glass studio he did just that, created dreams. But as film evolved, his work was forgotten until discovered later in life and revered for what it was. Kingsley is marvelous as Melies displaying a startling range in his character arc. His love of cinema is portrayed with innocent purity by Kingsley who is the heart and soul I’d this lovely valentine to silent film.

Portraying a mysterious man who finds himself a prisoner in a home accused of crimes against humanity. Tied to a chair he is forced to answer question after question asked by a livid Sigourney Weaver, who recognizes his voice as her torturer. We believe her because her belief is so pure, so strong, so unwavering. And we know monsters exist but do not always come in the form of monsters. Sometimes horrible creatures hide in plain sight as one of us. Kingsley is superb in the role, raising enough doubt to make us wonder if indeed he is innocent.

Opposite Kevin Kline in this lovely comedy, Kingsley is a pillar of decency as Vice President Nance, truly a good man caught up in terrible circumstances. After the real President, who has framed the Vice in fraud, has a massive stroke, a lookalike, Kline is brought in and initially only to be a face, finds out he is good at it, really good. He befriends the Vice, and when the time is right makes a move to have the right man in the Oval Office. Kingsley is wonderfully warm, the kind of man we want in that Office.

An unexpected, lovely comedic performance from Kingsley, portraying an out of work actor hired by a criminal organization to be their front man, the supposed villain The Mandarin. He is in reality a soda drinking jerk, as afraid of his bosses as the rest of the world. Though he looks cold and commanding as the Mandarin, he is a bumbling, terrified fool behind the scenes, swilling soda and watching movies. It is alarmingly funny to see him as the poor actor playing the part of an international terrorist. The makers did a great job keeping the lid on this until it opened.

As Simon Wiesenthal, who spent his life bringing Nazis to justice, Kingsley was excellent in this HBO film about the one time concentration camp prisoner who became a fierce advocate in bringing the Nazis to court and justice. Haunted by his memories, his eyes betraying his joy, always tinged with sadness, it is a powerful piece of acting.