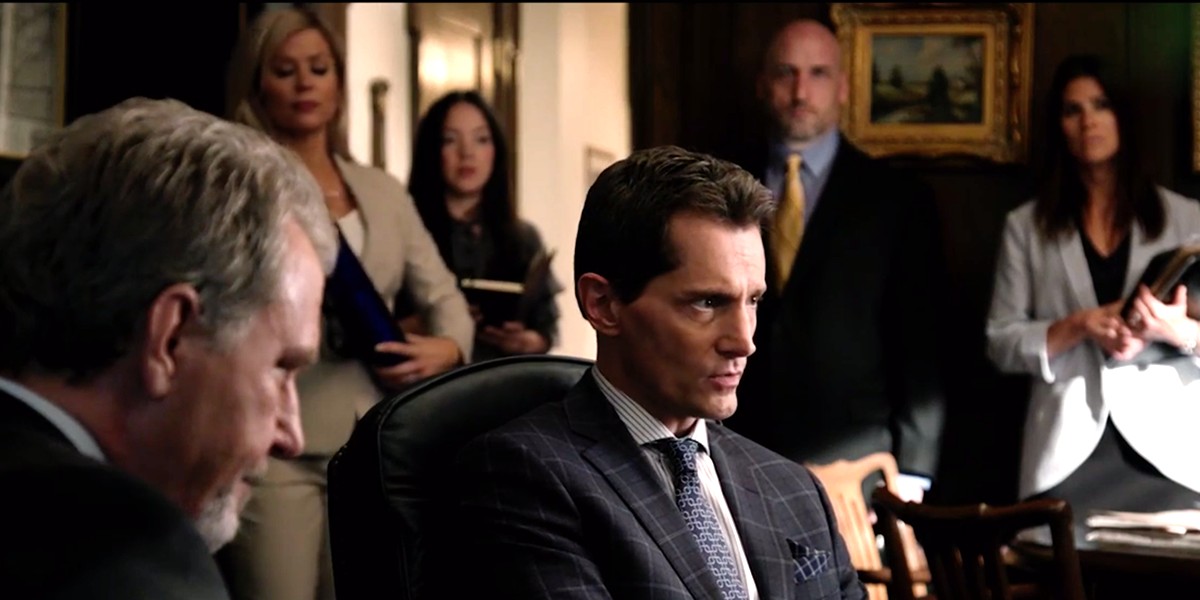 Paramount Network’s Western drama series ‘Yellowstone‘ juggles a multitude of characters who add a unique flavor to the show’s grounded and complex narrative. The series’s fifth season sees John Dutton becoming the Governor of Montana and starting a war with Market Equities, the corporate empire trying to take his land away. In this conflict, one character, namely Ellis Steele (John Emmet Tracy), is going quiet under the radar.

Steele has been a constant presence in the narrative for the last few seasons. However, with the Market Equities being essentially a foe to the Duttons, viewers must be wondering if he perishes, leading to the exit of actor John Emmet Tracy. If you are looking for answers about Ellis Steele’s fate and John Emmet Tracy’s future in ‘Yellowstone,’ here is everything you need to know!

Ellis Steele is introduced in the third season premiere of ‘Yellowstone,’ titled ‘You’re the Indian Now.’ He is a Market Equities representative working with Paradise Valley, a California-based real estate development company. Steele arrives in Montana after Dan Jenkins, the Bozeman manager of Paradise Valley, fails to obtain John Dutton’s land. After Jenkins’ downfall, Steele assists Market Equities CEO Will Hayes in procuring the Dutton family’s prestigious property, the Yellowstone Ranch. However, Hayes also fails in this quest and is replaced by Caroline Warner. Initially, Steele has a hard time working under Caroline at the start of season 4.

As the narrative progresses, Steele becomes the right-hand man of Caroline Warner. She expands the multinational corporation’s ambitions in Bozeman, Montana, after obtaining some of John Dutton’s land through a lease agreement. Steele oversees the airport’s construction with Caroline and looks after the company’s financial dealings. He continues to operate in a similar capacity in the fifth season. During Steele’s time in Montana, several people, such as Hayes, Roarke Morris, and Caroline, attempted to pry away the Dutton land. However, Steele has never been on the receiving end of the family’s wrath. Therefore, he is still alive and continues to assist Caroline Warner in the day-to-day business of Market Equities. Moreover, his experience in the region makes Steele a valuable asset to the corporation.

In the series, actor John Emmet Tracy essays the role of Ellis Steele. Tracy came into the limelight in 2010 with a guest appearance on The CW superhero drama series ‘Smallville,’ essaying the role of Dr. Alfonso. The actor also appears in a recurring capacity on the network’s widely popular drama series ‘Supernatural‘ in the recurring role of Mercury/John Driscoll. Tracy rose to prominence with his performance as Enzo Lambert in the comedy-drama ‘iZombie.’ His other credits include hit shows such as ‘Batwoman,’ ‘The Man in the High Castle,’ and ‘Altered Carbon.’ Tracy is credited as a recurring cast member throughout the third, fourth, and fifth seasons of ‘Yellowstone.’

Tracy’s character Ellis Steele is very much alive and still a part of the show’s greater narrative. Moreover, the actor is yet to publicly express a desire to exit the hit Western drama. Tracy is excepted to continue appearing in the fifth season of ‘Yellowstone’ which will comprise fourteen episodes. Therefore, there is plenty of time for the show to develop Steele’s story arc and continue his story in a new direction. As a result, it is safe to say that John Emmet Tracy is not leaving ‘Yellowstone’ anytime soon. Unless something drastic happens in the upcoming episodes, we will likely see Tracy’s Elis Steele assisting Market Equities in their battle against the Duttons. Since John Dutton is appointed as the Governor of Montana, the war between the multinational corporation and the Duttons is very much alive, and we are sure Steele will have some part to play in the matter.

Read More: Who Is Sarah Atwood in Yellowstone Season 5? Is the Actress Also in 1883?