Where Was Hallmark’s Feeling Butterflies Filmed? Who is in the Cast?

Directed by Allan Harmon, ‘Feeling Butterflies’ is a romantic drama that follows Emily Mariposa, a lepidopterist — butterfly expert — who runs a business of releasing butterflies at celebrations and other events. Soon, her path crosses with a single father named Garrett Thorson as he hires Emily for his adorable daughter Amanda’s birthday party, and the three end up bonding. When a renowned socialite hires Emily for her event for 1501 butterflies, both Garrett and Amanda are more than happy to help her.

Of course, nothing in life is ever so simple! Emily starts falling in love with Garrett, but complications arise in the form of a returning ex and more. This Hallmark movie is bound to be full of drama and an emotional ride we might just not be ready for! Due to its beautiful and aesthetic butterfly-packed setting, you must be curious to know where the movie has been filmed. Here is everything we know about the same!

This captivating movie was filmed in the Canadian provinces of Ontario and British Columbia, specifically in the cities of Almonte, Victoria, and Ottawa. The production for the film reportedly commenced in the month of June 2021 and most likely concluded by July of the same year. For most of the movie, a stunning Butterfly Conservatory was used to depict Emily’s business as a lepidopterist and her host of butterflies. Here is a deep dive into the exact filming locations!

Almonte is located in the town of Mississippi Mills in Lanark County, eastern Ontario. The filming took place in the former mill town for about 12 days, between June 8 to June 18, 2021. The beautiful homes at 175 + 179 Elgin Street and 161 + 145 Union Street doubled up as filming sites for the lighthearted movie. Several scenes were also shot in Cashmere and Rose, a beautiful gift and floral boutique.

The famous statue of James Naismith, the inventor of Basketball, was also used as a backdrop for the filming of this romantic drama. A few scenes were also taped at the Mill of Kintail Conservation Area at 2854 Ramsay Concession 8 and the picturesque Evermore Wedding and Events at 4960 County Road No 29.

The production team seemingly moved to the capital city of Ottawa to tape a few scenes for the Kevin McGarry and Kayla Wallace starrer. Located in the eastern part of southern Ontario, the city is well known for its spectacular scenic vistas and the abundance of natural and historical landmarks. The favorable weather conditions of Ottawa offer the perfect backdrop for movies and TV shows. The Rideau Canal Skateway, touted as the world’s largest naturally frozen skating rink, is also located in the heart of the city. A few scenes of this Hallmark film were shot around Clarence Creek, about 45 kms east of Ottawa.

According to actor Kevin McGarry, the beautiful city of Victoria in the westernmost province of British Columbia also served as a shooting site for several scenes of ‘Feeling Butterflies.’ While the actor does wish to shoot a movie overseas, he was more than happy with his experience while filming the movie. He seemed especially delighted about the butterflies he got to share the screen with. 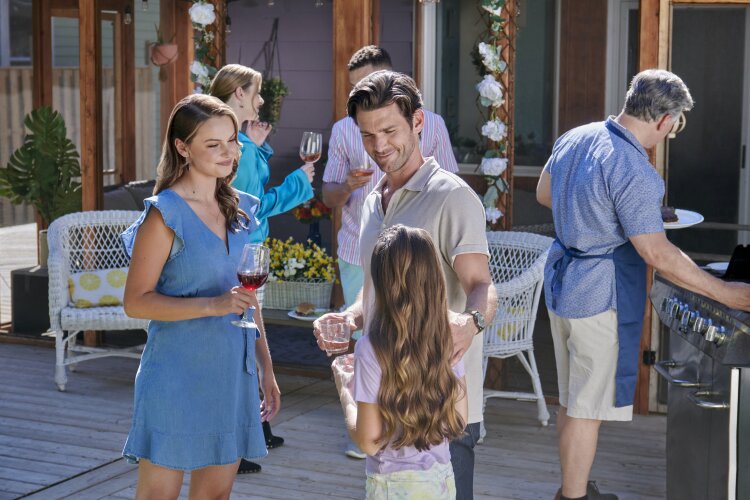 Kevin McGarry essays the character of Garrett Thorson, a single father who falls for the free-spirited lepidopterist. McGarry is best known for his performance as Nathan Grant in ‘When Hope Calls‘ and ‘When Calls the Heart.‘ You may also recognize him from ‘Heartland,’ ‘Winter Love Story,’ ‘Winter Castle,’ and ‘The Wedding Veil‘ trilogy. Kayla Wallace portrays the character of Emily Mariposa, the ambitious lepidopterist. She is well known for her performances in ‘The Magicians,’ ‘The Good Doctor‘, and ‘When Calls The Heart.’

‘Feeling Butterflies’ is a special movie for the fans of both Kevin McGarry and Kayla Wallace as they are a couple in real life as well. Apart from the leads, Alyssa Gervasi appears as Amanda Thorson, the cute daughter of Garrett Thorson. Gervasi is famous for portraying the character of young Vanya in ‘The Umbrella Academy.’ You can also find her in ‘Love in Harmony Valley‘ and ‘How to Hero.’ ‘Killjoys’ fame Ish Morris also appears in the film as Jodi.