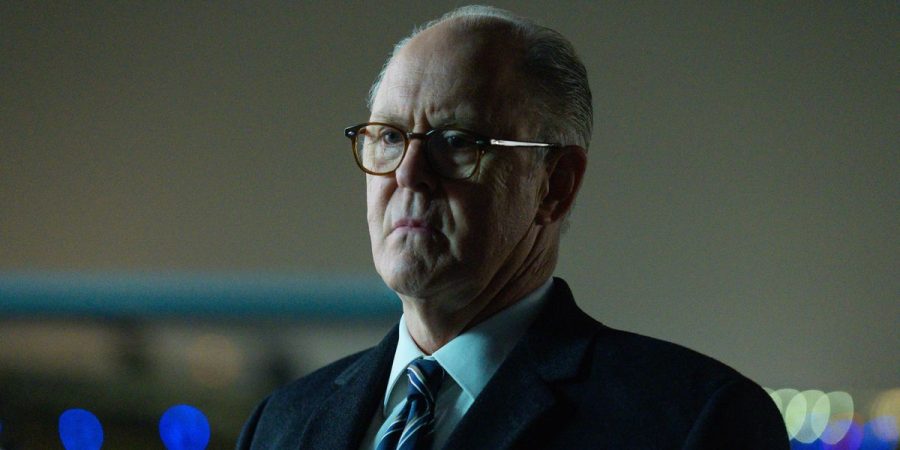 ‘The Old Man‘ episode 4 continues unfolding Dan Chase’s riveting story in the past and present as the former CIA operative continues to run from the government forces trying to hunt him down. The episode titled ‘IV’ sees Dan trying to execute an ambitious plan to strike back at Faraz Hamzad.

Meanwhile, Harold Harper learns the true intentions of the Afghan warlord. The episode delivers some startling twists and shocking moments that will leave viewers curious for answers. If you are looking for details about the events and ending of ‘The Old Man’ episode 4, here is everything you need to know! SPOILERS AHEAD!

The fourth episode, titled ‘IV,’ opens with Dan Chase (Jeff Bridges) freeing Zoe McDonald (Amy Brenneman) from his car trunk. Dan explains the situation to Zoe and allows her to contact her son. He asks Zoe to tell her son that she is being held captive against her wishes so that Zoe and her son aren’t considered accomplices. After the call, Dan and Zoe continue their journey together. Meanwhile, an agent informs Harold Harper and Agent Angela that Dan Chase has disappeared.

Angela has a conversation with Harper, and Harper begins to suspect something is off about Angela. Later, Angela secretly speaks with Dan and informs him that Harper is planning to meet with Faraz Hamzad’s lawyer. She explains that Harper believes Hamzad wants a confidential piece of information. Dan refuses to accept the theory and feels Hamzad is after Chase due to a personal vendetta. Dan reveals that he is heading to Los Angeles. He warns Angela/Emily about the threat that Hamzad poses.

On the road, Dan and Zoe assume the false identities of Mr. and Mrs. Dixon. Under the fake identity, Dan is invested in a corporate company that is his major income source. Dan plans on meeting with the company’s CEO in hopes of executing his plan to take down Hamzad. A flashback reveals that a troop of Hamzad led by Belour was brutally defeated in the valley. Dan suspects that Hamzad’s enemy is aided by the Russian special forces and suggests a countermove.

In the present, Julian Carson calls Harper and asks to settle his account after his failed attempt on Dan’s life. However, Carson suggests that there is a mole in Harper’s rank. Because of the mole, Dan was aware of the hitman’s arrival leading to the mission’s failure. Harper, Agent Waters, and Angela arrive to meet with Hamzad’s lawyer, Nina Kruger. Kruger reveals a memorandum that contains details of Harper’s unethical actions in Afghanistan. If Harper refuses to comply with Hamzad’s wishes, the memorandum will be leaked to several government agencies.

On the other hand, Harper presents Kruger with the theory that Hamzad is merely seeking some information. Later, Harper’s theory is proven true after Kruger informs him that Hamzad wants to meet with the FBI Assistant Director in person. In a flashback, Dan exacts revenge on Hamzad’s enemies and captures one of them, Sulaiman Pavlovich. In the present, Dan plans to get Pavlovich’s attention by making a risky equity move. Thus, Dan hopes to get Pavlovich’s help in defeating Hamzad.

The Old Man Episode 4 Ending: What Deal Does Zoe Make With Dan?

In the episode’s final act, Harper boards the plane for his meeting with Hamzad. However, he hints that he is aware that Angela is the mole within his ranks. Meanwhile, Dan returns home after his meeting with Gregory. Gregory refuses to help Dan with the risky equity move he has planned. Therefore, Dan’s hopes of getting Sulaiman Pavlovich’s attention are crushed. On returning home, Dan finds Zoe waiting for him with dinner. While it seems like Zoe has put behind the shock of learning Dan’s truth, she has an unexpected card to play.

Zoe reveals that she has obtained the divorce form of Mr. & Mrs. Dixon and plans on sharing it with Dan’s company. The revelation of Mr. Dixon’s divorce will lead to an investigation of his assets and would strip Dan of the company’s support. Therefore, Dan is forced to go on the backfoot. Zoe then explains that she wishes to become an active part of the situation that she and Dan find themselves in. Zoe asks Dan to transfer half of his assets to her name. Dan is apprehensive of doing so as it would directly implicate Zoe in aiding and abetting Dan. Moreover, it would also make Zoe a target of Dan’s enemies.

However, Zoe is adamant about getting involved in Dan’s “business.” She threatens to leak the divorce forms if Dan does not comply with her wishes. Zoe’s demand is a gesture of goodwill from Dan that will ensure they both are under equal threat. Thus, the arrangement would help Zoe trust Dan while securing her son’s future and compensating her for her troubles. Dan is forced to accommodate Zoe’s audacious demands into his already complicated plan. However, Zoe’s presence might help him sway the company to agree with his plans to attract Sulaiman Pavlovich. Nonetheless, only time will tell whether Zoe’s bold move pays off for her and Dan.