Where Was Hallmark’s In Merry Measure Filmed? Who is in the Cast? 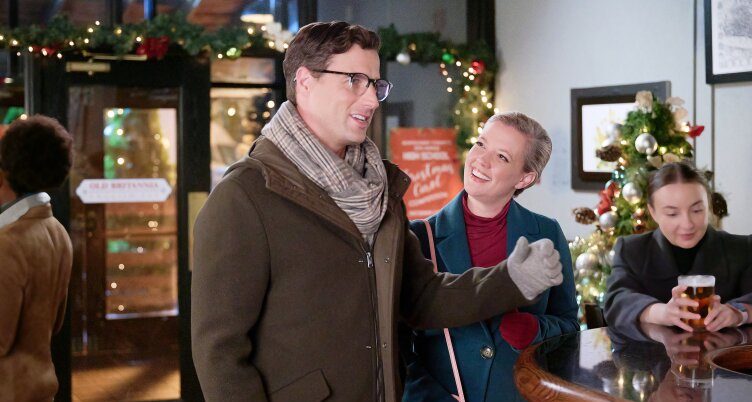 ‘In Merry Measure’ is a new-age romantic comedy that is set around the joyful holiday season. Directed by Paula Elle, the film follows pop singer Darcy as she goes home for the holidays to spend time with her sister and niece. When she arrives at her hometown, she learns that her niece Megan has been rejected from joining The Herald Angels, the high school carolers that had starred Darcy. But when she learns that her old nemesis, Adam, is now in charge of the honorable squad, she recruits her niece to start a team of their own.

With the county’s annual competition around the corner, the two first decide to compete and let the winning team participate in the real event. But as time passes, Darcy and Adam realize they have better odds of winning if they come together. The movie explores forgiveness and moving on from past issues. As the film is set around festive days, the celebration and decorations add a unique charm to the overall visual. If you’re wondering where the movie was shot, we have the details for you.

‘In Merry Measure’ was majorly shot in Vancouver and Langley in the westernmost Canadian province of British Columbia. From what we can tell, filming commenced in the Summer of July 2022 and likely concluded in a few weeks. Now, let’s know more about the specific filming locations of the heartwarming holiday film!

Even though the movie is set in Darcy’s hometown Ohio, ‘In Merry Measure was majorly shot in the port city of Vancouver in the southwestern part of British Columbia. Dubbed Hollywood North, Vancouver is one of the most prominent production hubs mostly due to its vibrant and picturesque beauty, favorable climate, hospitality, skilled technicians, and other production facilities it offers. It reportedly serves as the backdrop of more than 50 Hallmark productions each year. Over the years, several films such as ‘Hope at Christmas,’ ‘Christmas Joy,’ and ‘Road to Christmas’ have all been shot in the beautiful city.

It is likely that a portion of ‘In Merry Measure’ was taped in the city of Langley, which is famous for being a film-friendly municipality in Metro Vancouver. The regional town center of the city is currently one of the Lower Mainland’s busiest commercial and industrial land bases. Langley is well renowned for its distinctive shops and restaurants, and the neighborhood has developed into a mecca for big-box stores and high-end luxury goods.

Other movies and series filmed in Langley include ‘Supernatural‘, ‘The X-Files‘, ‘The Vampire Diaries‘, ‘Riverdale‘, and ‘Devil in Ohio’. Some behind-the-scenes footage shared by Cassidy Reichman, who appears as Megan, demonstrates how much fun the cast and crew had while making ‘In Merry Measure.’

The holiday romantic comedy stars Patti Murin and Brendan Penny as Darcy and Adam, respectively. You must recognize Murin from movies like ‘To Catch A Spy’ and ‘Love On Iceland’ while Penny can be seen in ‘Chesapeake Shores’ and ‘Time For Them To Come Home For Christmas’. ‘Schitt’s Creek’ fame Jennifer Robertson essays the character of Gretchen.