Where Was Hallmark’s Sister Swap: A Hometown Holiday Filmed? Who is in the Cast?

Each year, Hallmark has a fun list of holiday movies under its Countdown To Christmas series, to warm up the festive season. ‘Sister Swap: A Hometown Holiday’ is one such joyful movie, directed by Sean McNamara. The story revolves around Jennifer, a single mother raising her teenage son Simon in Salt Lake City. She devotedly runs her late husband’s restaurant and is elated when her beloved sister Meg visits her during the holidays. Meg offers to look after the restaurant, while Jennifer takes Simon to visit her hometown, Hazelwood.

Once there, she realizes that The Madison, the local theater owned by her late uncle, is on the verge of shutting down. As the place holds many childhood memories, Jennifer and Simon decide to try and repair the theater. They are aided by the townsfolk as well as Eric, Jennifer’s high school debate team rival. As she and Eric reconnect, Jennifer realizes that there are now brighter possibilities for the future. The movie is a sweet tale of family, sisterhood, and love, set in a picturesque small town during Christmas. Let’s dig in to find out where exactly ‘Sister Swap: A Hometown Holiday’ was filmed.

‘Sister Swap: A Hometown Holiday’ was filmed entirely on location in Utah, particularly Salt Lake City. Filming most likely commenced in April 2021 and was completed by May 2021. Utah is a region rich in scenic diversity, having landscapes varying from a salt desert to the Rocky Mountains, and even quaint small towns. This, as well as the handsome monetary incentives it provides filmmakers, makes Utah a much sought-after filming location.

Utah is also the venue for the prestigious annual Sundance Film Festival, and a lot of Western classics, as well as movies like ‘Nine Days,’ ‘Thelma And Louise,’ and ‘High School Musical’ were filmed there. Here is a detailed look at the filming locations for ‘Sister Swap: A Hometown Holiday.’

Majority of ‘Sister Swap: A Hometown Holiday’ was filmed in Salt Lake City, the capital of Utah. As one of the characters in the movie is based in Salt Lake City, it was authentic to film those scenes in the location itself. The populous city is a favored choice for film and TV production, as it is an ideal urban landscape for shoots and also because it is exempt from the regulations of the Screen Actors Guild. Some of the prominent filming spots in Salt Lake City are the Utah State Capitol, the Bonneville Salt Flats/ Lake, the Salt Lake Temple, and the Memory Grove Park. ‘127 Hours,’ ‘Con Air,’ and ‘Christmas Made To Order’ are some of the movies filmed in Salt Lake City. 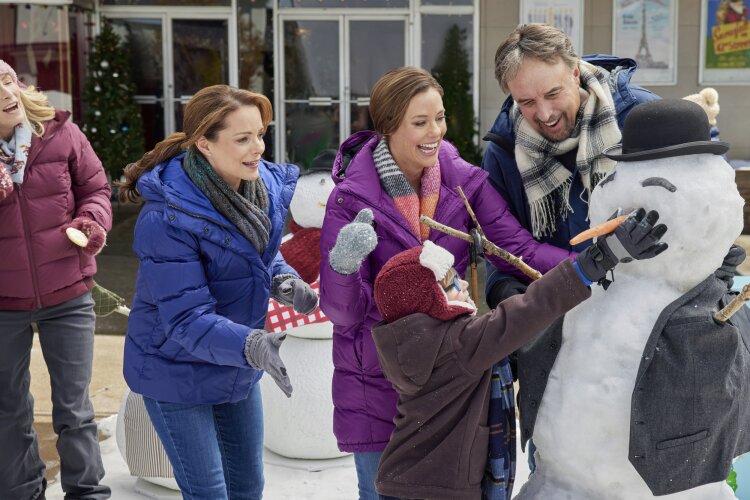 Real-life sisters Kimberley Williams Paisley and Ashley Williams play on-screen siblings Jennifer and Meg Swift. Jennifer is a city-based restaurant owner; while Meg helps their parents run a bakery in their hometown. When the two sisters swap locations for the holidays, it makes them explore newer opportunities. Paisley has worked in movies such as ‘The Christmas Chronicles’ and ‘Father of The Bride,’ while Williams is known for her roles in the movie ‘Christmas In Evergreen’ and the hit TV sitcom ‘How I Met Your Mother.’