Where Was Hallmark’s The Holiday Sitter Filmed? Who is in the Cast? 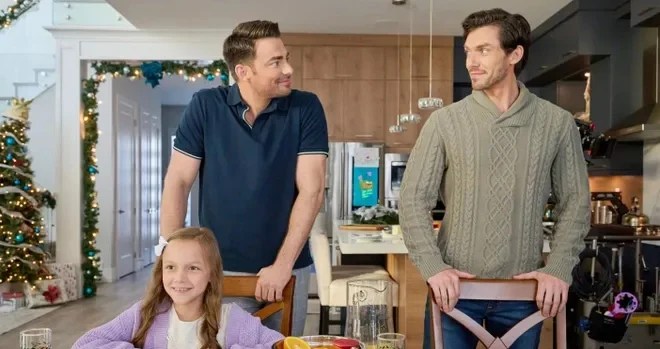 Part of Hallmark’s ‘Countdown to Christmas’ line-up, ‘The Holiday Sitter’ is a romantic movie set against the backdrop of the holiday season. Directed by Ali Liebert, the film chronicles the tale of Sam, a work-obsessed uncle who gets stuck babysitting his niece and nephew over the holiday season, thereby giving up his dream vacation in Hawaii. He seeks help from his sister’s hot neighbor, Jason, with babysitting and eventually, a holiday spark emerges between the two.

The milestone Hallmark movie features the first leading gay couple in a Hallmark Christmas film. The film ticks all the boxes of being the perfect heartwarming Christmas film with kids, families, and the holiday spirit. Additionally, the settings and backdrop elevate the festive spirit of Christmas, a colorful time that heals your heart and brings people closer, and provides an energizing mood, leaving one to wonder where ‘The Holiday Sitter’ was shot. Curious about the same? Well, we’ve got you covered!

‘The Holiday Sitter’ was entirely filmed in British Columbia, mainly in Vancouver. The principal photography commenced in August 2022 and wrapped up within a month of the same year. The region is well known for its dynamic culture and active way of life, which add to the holiday and festive feel of the holiday movie. Actor Jonathan Benett shared his experience with filming in August in Vancouver. He said, “I’m dreaming of a white Christmas, but really, I’m just hoping the soap suds don’t go in my mouth during a take because it’s gross.” Let’s get into the specific details!

All of the sequences of ‘The Holiday Sitter’ were filmed in Vancouver’s port city. To film interior and outdoor sequences against suitable backdrops, it appears that the cast and crew traveled around the city. Furthermore, it’s conceivable that the Christmas movie was shot on a Vancouver backlot of a movie studio. The features of the city set the mood for various scenarios and express the characters’ emotions.

The fact that Vancouver has pleasant weather for most of the year adds to the friendly tone of the movie. Due to the financial benefits offered by the government for filming in the area, the coastal city is also one of the most studio-friendly locations in the business. One of the most well-known cities in the Great White North, Vancouver has long been a draw for various industries. Everyone, from businesspeople to filmmakers, may find a place to call home in the maritime city.

Its long history may be traced to the period when several native tribes called it home thousands of years ago. It was formally established in 1870, and since then, its fame has only increased. The cast and crew had to travel around the city to capture interior and outdoor scenes against the appropriate settings. It appears that the performers and crew utilized the resources of a genuine film studio located in the city to construct the set shown in the Christmas movie. Other Hallmark movies taped in Vancouver include ‘Home for Harvest,’ ‘Marry Go Round,’ ‘To Her With Love,’ and others.

Jonathan Bennett essays the role of Sam in ‘The Holiday Sitter.’ He is best known for her performance in several productions such as ‘Mean Girls,’ ‘Wedding of a Lifetime,’ ‘Love Island,’ and others. On the other hand, George Krissa plays the role of Jason. You might recognize him from his roles in ‘Road Trip Romance,’ ‘The Civil War: Brothers Divided,’ and ‘The Dwelling.’

Read More: Where Was Hallmark’s The Most Colorful Time of the Year Filmed? Who is in the Cast?