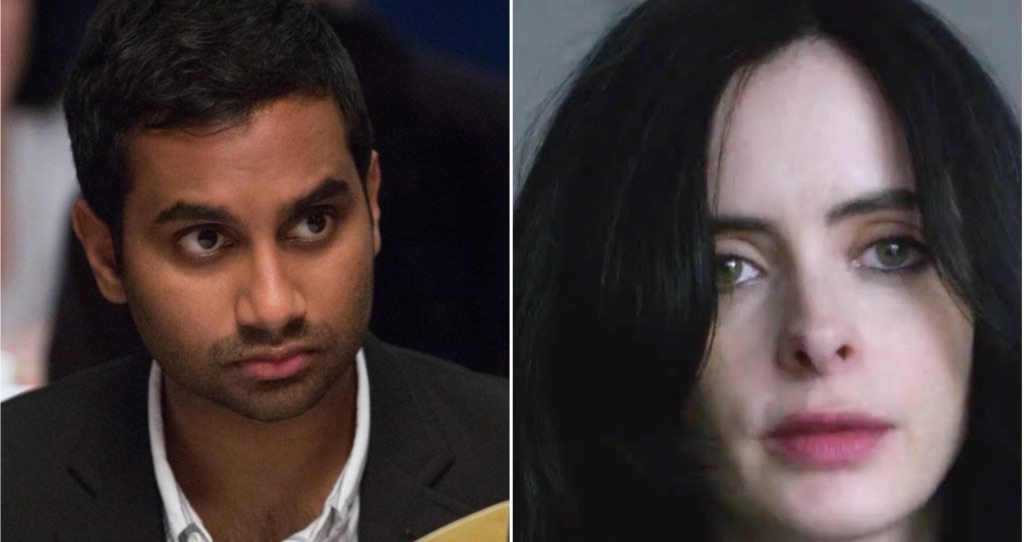 The appeal and quality of Television Shows have been increased significantly since the last decade or so. Now, it is not at all confined to a few countries and has become a global phenomenon like the movies. We are in a period when many A-lister film actors and directors have started their TV ventures and have been very successful in this medium too. Even this year, directors like The Wzchowskis (Sense8), M Night Shyamalan (Wayward Pines) have started their debut projects. Worth mentioning that many of the top directors, viz., David Fincher (House of Cards, 2013), Steven Soderberg (The Knick, 2014-present), etc have already tested their hands at TV shows and shortly, Martin Scorsese will be joining them too with Vinyl in 2016. Even actors of all kind, from Clive Owen, Kevin Spacey to Kirten Dunst have been showcasing their talents on Television recently and also, in turn, earning loads of praises for their performances.

2015 has been a great year for both movies and TV, but if one were to judge solely on the basis of quality, especially in the writing and acting department, TV has the edge. The year has been chock full of newcomers as well as old-timers coming back for subsequent seasons. Drama, crime, comedy, superheroes — 2015 had it all. Today we have listed down the top TV shows of 2015. We have ranked these shows according to their current season in this year, and not for their overall stance or for earlier season/s. 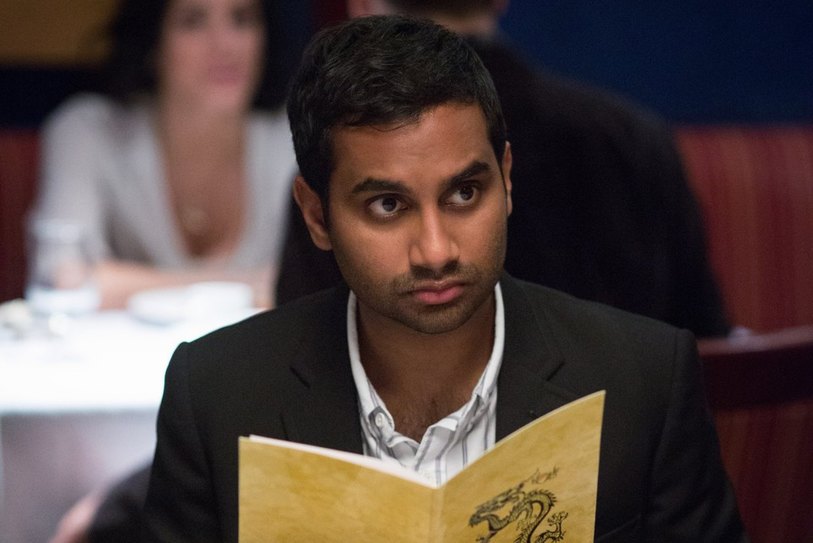 Much in the vein of Louis CK’s “Louie”, Aziz Ansari’s “Master of None” has quickly found its way into the hearts of the audience. Set primarily in New York, the humor in “Master of None” is realistic, the characters are adorable and relatable. In Aziz Ansari’s Dev, one may find the everyday struggles of a man. Noel Wells may very well be the star of this show, who plays Rachel, Dev’s romantic interest. The characters are memorable and not contrived, as is the case with many wannabe comedy shows like this one. “Master of None” manages to carry an easy charm throughout its first season, owing much to Ansari’s witty presence. 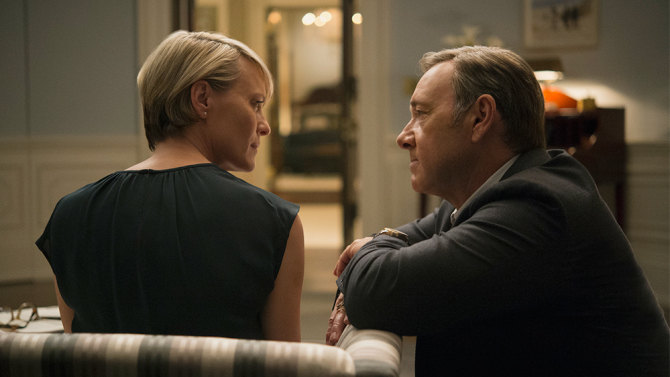 If you are not interested in politics then I assure you, this show will create that interest in you and make politics interesting for you. With the likes of 2 times Oscar winning actor, Kevin Spacey and Emmy winner (for HoC) Robin Wright, this show can be a delicacy to your entertainment diet. HoC is known for its writing, Frank Underwood’s (Kevin Spacey) monologues/interactions with the audience in between is the highlight of the show. After the outstanding last two seasons, this season is a bit lower than expectations, but still excellent. The climax of this season has given all the indications that it will reclaim its past glory in coming election season and garner more recognitions for its protagonists.

8. The Man in the High Castle 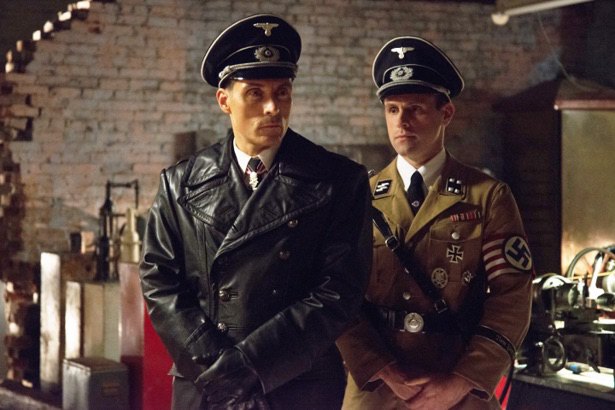 Adapted from Philip K Dick’s novel “The Man in the High Castle”, this series shows us an alternate reality where the Nazis have won WW-II. United States is divided into three zones, one controlled by the Japanese, one by the Germans, and a neutral zone. While the show differs from the novel in some aspects, it is still quite a faithful adaptation. Fill with gorgeous camerawork, intelligent editing and some great acting, Amazon’s first foray into directly streaming media hits the mark. 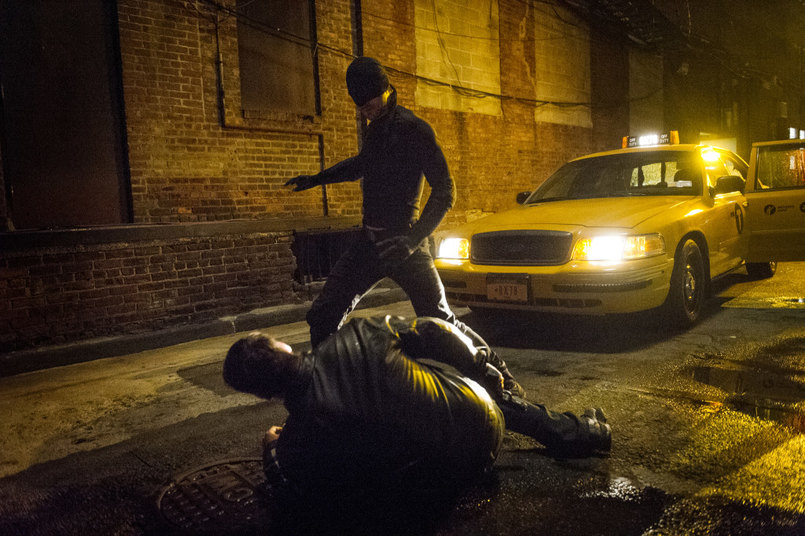 We never thought “Marvel” will ever put us in a dilemma where we have to choose two of their comic book adaptions in our top 10 TV Shows. Well, Daredevil is one of the very best of Marvel & Netflix, which has already made its competitors obsolete. The series portrays a blind vigilante, Matthew Mardock(Charlie Cox) who protects his city at night and is an attorney at law in daytime and shows how he tackles Wilson Fisk (Vincent Philip d’Onofrio), an Underworld Kingpin who controls all the mafia in the Hell’s kitchen. Daredevil is a content driven, well performed, high octane action thriller which is now the closest competitor to its own sibling (Marvel/Netflix Production), Jessica Jones. 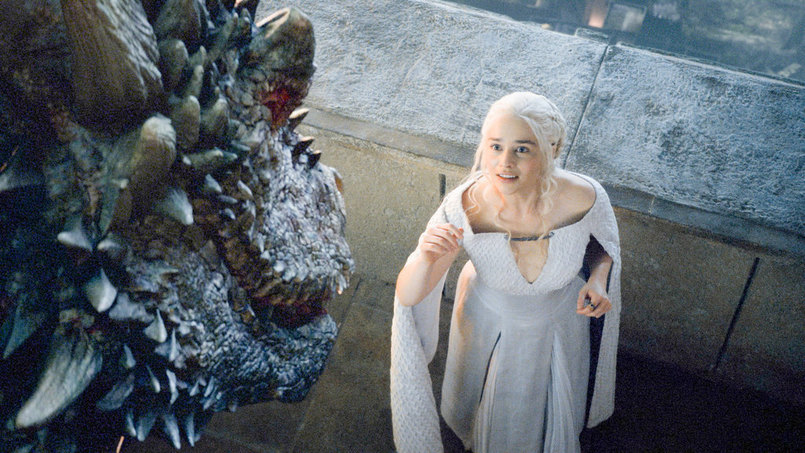 I guess the most watched/pirated show in the history of world television needs no new introductions. ‘Game of Thrones’ is known for it’s powerhouse of performances, epic storytelling, bold screenplay, sexual contents and full of unpredictable events and this season is no different in that sense. Season 5 basically shows the growing power of queen Daenerys, the most waited battle between the Night’s watchmen and the white walkers, introduction to Dorne and the ordeals, Arya, Sansa and Queen Cersei go through in their respective lives. Unlike it’s previous season, this season faced a bit turbulence in it’s initial episodes but later coped up and successfully lived upto it’s viewers’ expectations. 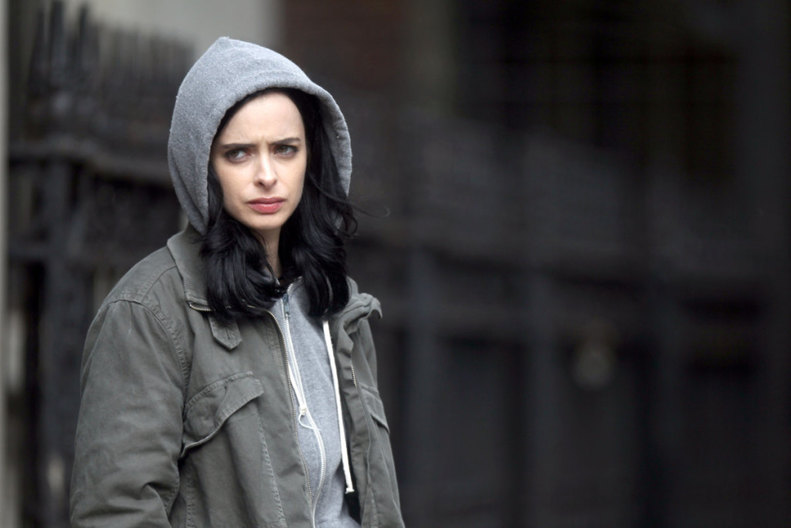 When was the last time you watched a superhero show that wasn’t actually about superheroes doing superheroic stuff, but talked about deeply personal issues which rarely make it to mainstream television ? Never, right ? Jessica Jones takes characterization to another level altogether. In doing so, it talks about troubling issues and stigmas of our society on a personal level; issues such as gaslighting and rape. In Jessica Jones, Marvel gave us a superhero worth caring and rooting for, and in Kilgrave, it gave us the most terrifying villain till date. Jessica Jones subverts tropes and gives us believable characters, while at the same time being a commentary on society as a whole. 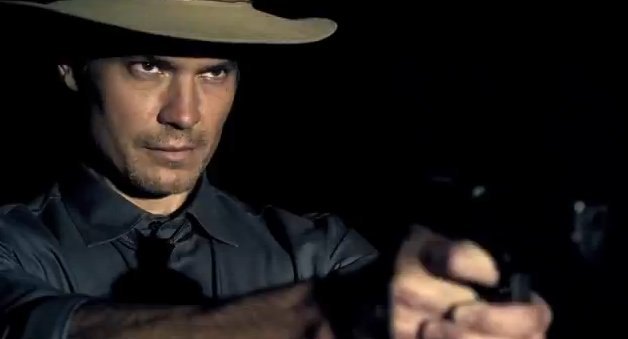 In its finale season, we can simply say ‘Justified’ has completely justified the show’s greatness. With a crisp storytelling, intriguing screenplay, colorful characters with amazing performances, ‘Justified’ bade adieu to TV in it’s own style. It’s a Modern Western, Crime-drama show been shot in Harlan, Kentucky, US and the final season plots how US Marshal, Raylan (Timothy Olyphant) is working on getting Ava(Joelie Carter) and Dewey Crowe to turn on drug-dealer, Boyd (Walton Goggins), who seeks one last big score. However, more trouble comes  when a formerly exiled gangster Avery Markham (Sam Elliott) and a former Special Ops soldier (Garret Dillahunt) set foot in Harlan. Besides it’s talented star-cast, the real X-factor of this season is guest actor, Sam Elliott who has a tremendous screen presence, making it undoubtedly the best season of the show. 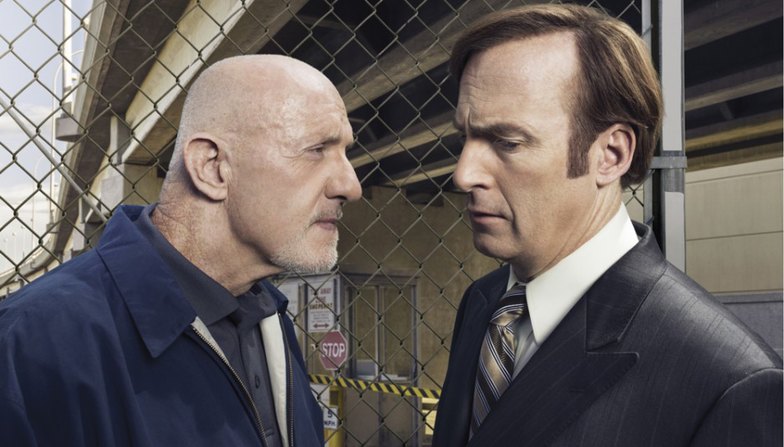 Breaking Bad ended and broke all our hearts two years ago. Only in a few days, it was announced that there’ll be an entire show dedicated to one of the supporting characters who only made his first appearance in Season 2. People would rather watch Jesse’s story, or Hank’s for that matter. But it is a testament to Bob Odenkirk’s experience and screen presence that Better Call Saul hit it off. No, it is not Breaking Bad. Instead, it’s an in-depth study of one of its predecessor’s most underrated characters. The visual style is reminiscent of Breaking Bad, and one wouldn’t hesitate in talking about this show in the same breath as its worthy predecessor. 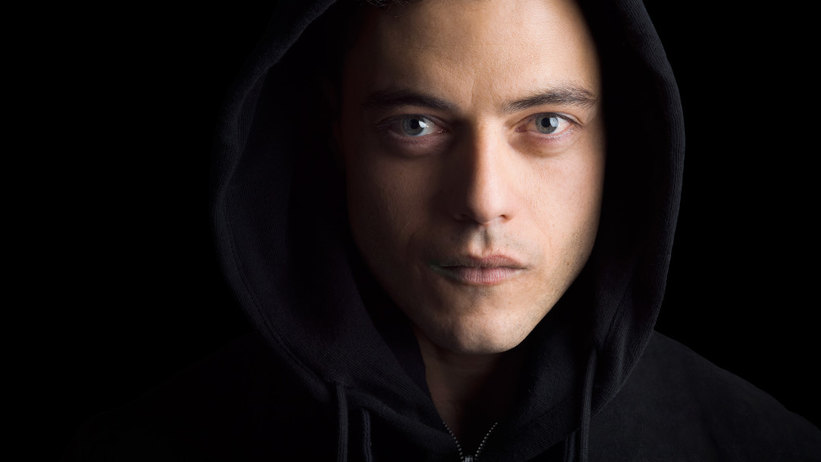 Sam Esmail’s breakout debut, a vision unlike any other TV show this year, ‘Mr. Robot’ is easily among the best shows of this year. A dark mirror of our own society, ‘Mr. Robot‘ is a rare visual treat. Made with unusual flair and finesse, with some remarkable editing and technical brilliance, ‘Mr. Robot’ chronicles the story of Elliot Anderson, a network security engineer with social anxiety and paranoia. He is clinically depressed and takes regular doses of morphine to maintain his own sanity. He is recruited by the head of an anarchist society named F-Society to take down the biggest corporate conglomerate of the world, E-Corp. Channeling the works of David Fincher in its visual style and narrative, but still managing to be fiercely original, “Mr. Robot” is the show to watch if you haven’t done it till now. 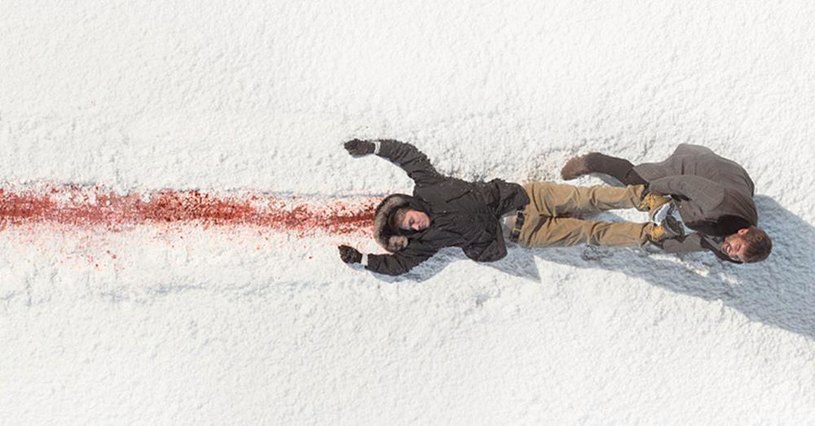 If you are a Television lover then I’d say it is a crime if you’re not watching Fargo. It’s a definitive piece of art, which has raised the bar for all other TV shows, if it were already not excessively high. Based on the film of the same name in atmosphere, style and location only, Fargo presents more quirky characters and a new storyline that is expertly executed with dark humor and odd twists. Season two of Fargo retains all the elements that made the series an award-winning hit, successfully delivering another stellar saga powered by fascinating characters, cheeky cynicism, and just a touch of the absurd. Overall, Fargo is mysterious, intense, funny, tragic or just simply plain awesome!