7 Movies Like Vicky and Her Mystery You Must See 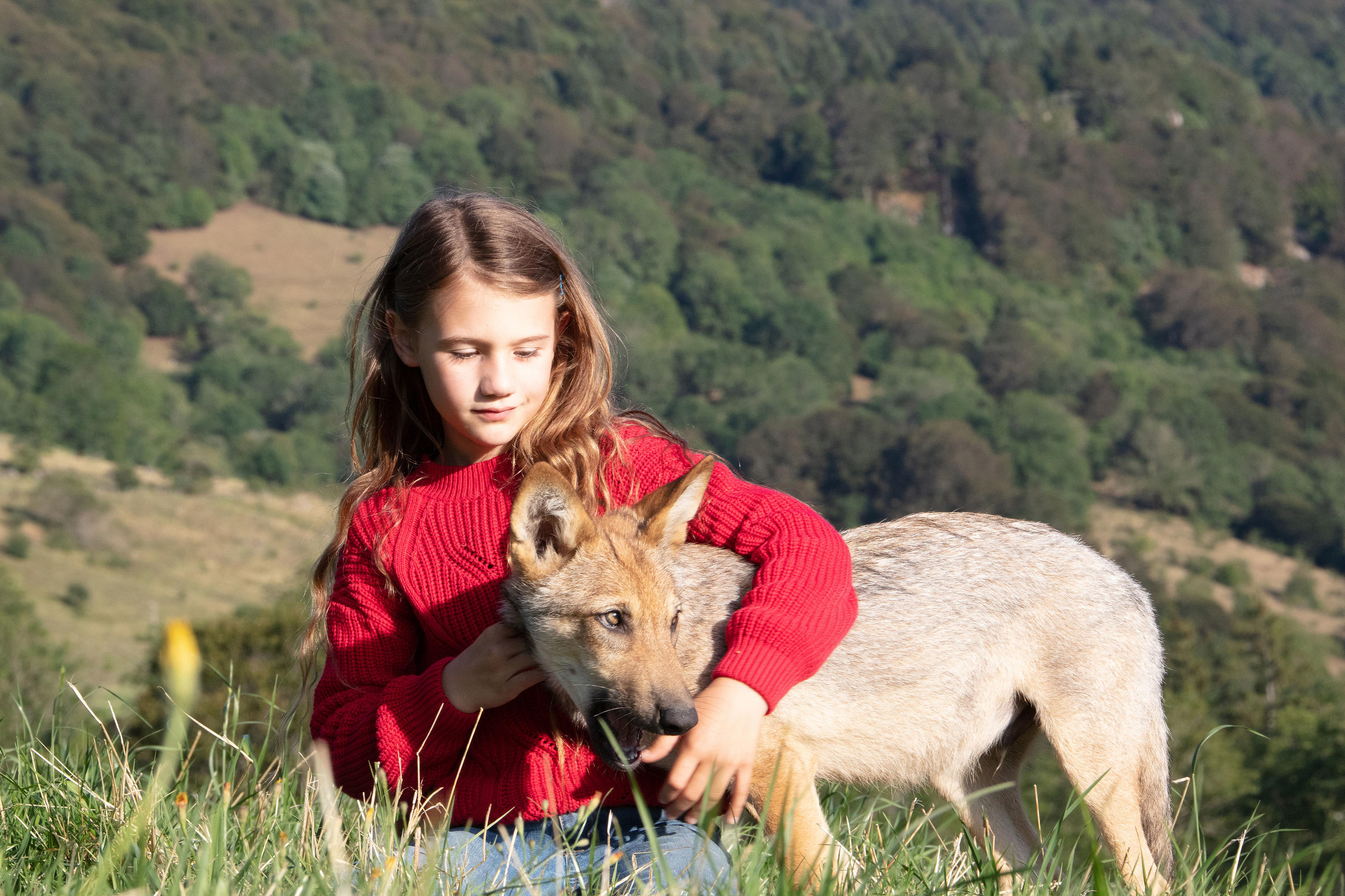 ‘Vicky and Her Mystery’ or ‘Mystère’ is a soulful family adventure movie that depicts the love between animals and children. Directed by Denis Imbert, the story revolves around Victoria, an eight-year-old girl who stops talking due to the grief of her mother’s demise. Her shift to Cantal with her father makes things worse for her until she finds an adorable puppy while walking in the forest one day. She decides to keep the puppy and names him Mystère, and eventually, the sweet bond between the two helps heal Victoria and she finds her voice again.

However, Mystère turns out to be a wolf cub, and now Victoria must go against all odds to protect him from being taken away or worse, hunted down. Despite being a wild animal that’s considered dangerous, Mystère loves and protects Victoria unconditionally. ‘Vicky and Her Mystery’ surely warm the cockles of everyone’s hearts by depicting the pure love and innocence of animals and children and is a treat for animal lovers. If you wish to watch more such movies, we have a great list of recommendations ready for you! You can watch most of these movies similar to ‘Vicky and Her Mystery’ on Netflix, Hulu, or Amazon Prime. 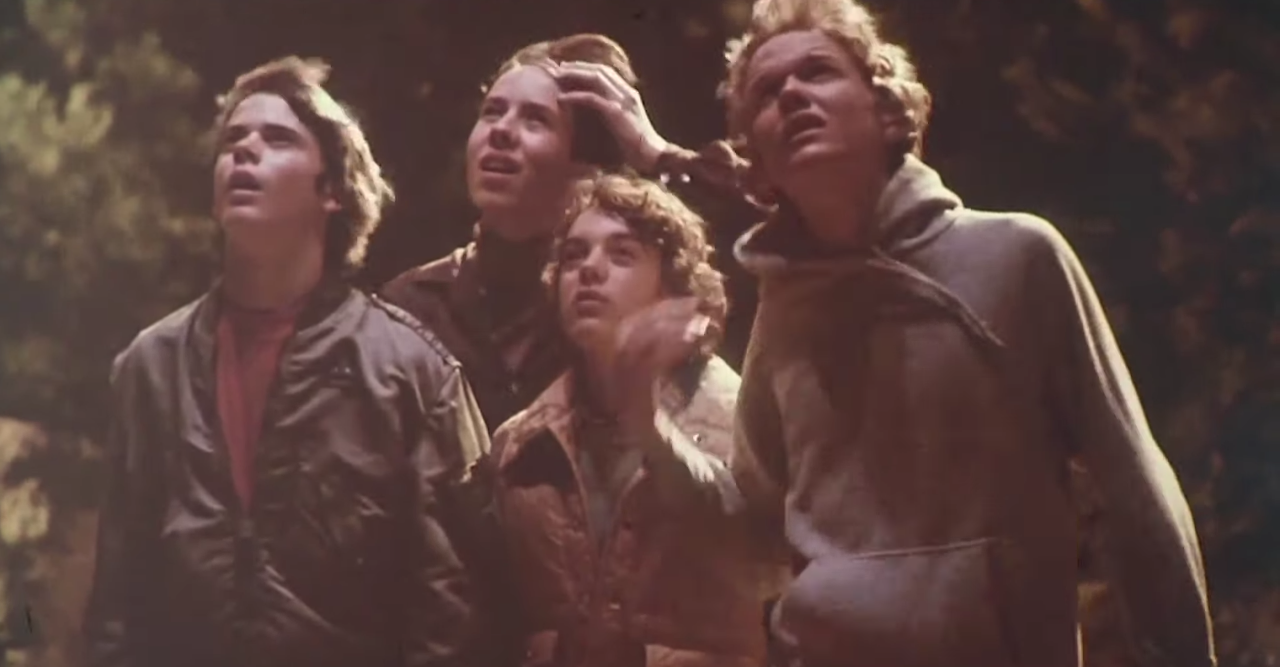 Steven Spielberg’s iconic directorial ‘E.T the Extra-Terrestrial‘ is what reportedly inspired Denis Imbert while writing ‘Vicky and Her Mystery.’ Starring Henry Thomas, Drew Barrymore, and Dee Wallace among several others, the sci-fi adventure movie revolves around a sweet alien who gets stranded on earth, where he befriends Elliot and his little sister Gertie. Both the kids take in the alien and name him E.T., hiding his existence from everyone including their parents.

E.T. forms a magical connection with the siblings but when he suddenly falls ill, his existence is discovered by others and causes government intervention. As the government officials try to perform scientific experiments on E.T. thus endangering him, it falls upon Elliot and Gertie to rescue him and help him return to his home planet.

Though the character in question is a fictional alien, the friendship he shares with Elliot is quite similar to Vicky’s and Mystère’s friendship. Both the movies share the common themes of children’s unconditional acceptance of all beings as well as the gratitude any creature exhibits in return for a little affection. The multiple Academy award-winning ‘E.T the Extra-Terrestrial’ also has a tear-jerking final scene where E.T. and Elliot say goodbye, highly reminiscent of the scene where Vicky bids farewell to Mystère. 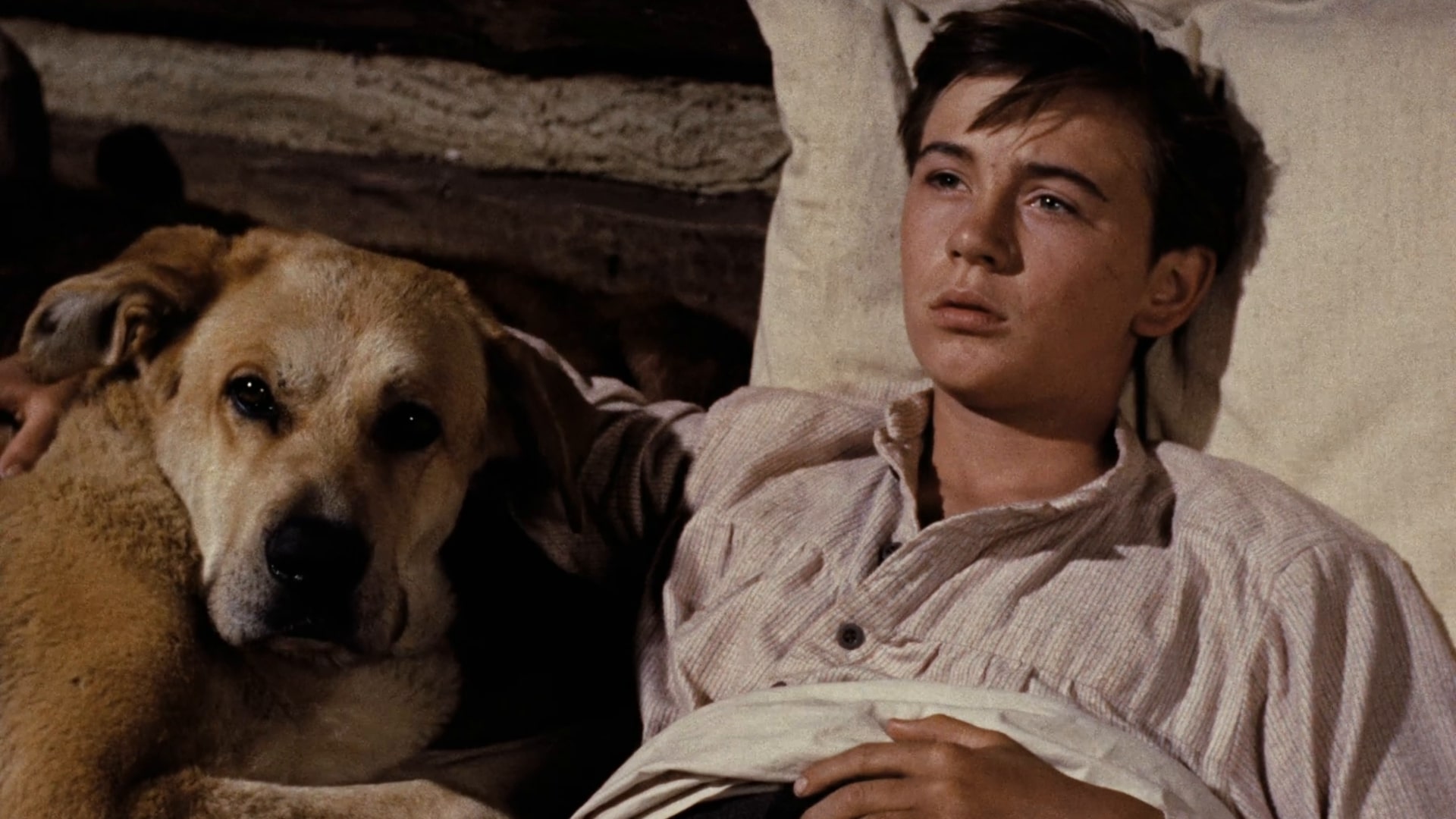 Starring Tommy Kirk, Dorothy McGuire, Fess Parker, and Beverly Washburn, ‘Old Yeller’ is an emotional drama film that explores the relationship between young brothers Travis and Arliss Coates and their beloved dog named Old Yeller. Travis initially tries to shoo away the dog whom he encounters while working in the field but eventually grows closer to him when he saves Arliss from a bear attack.

Old Yeller eventually begins to have a deep impact on Travis, and the loyal dog goes on to save the family from various mishaps. Unfortunately, when Old Yeller saves them from an aggressive wolf, the latter bites him thus infecting him with rabies. The Coates brothers try to conceal Old Yeller’s disease to continue keeping him, but when Katie explains the dog’s suffering to them, Travis has to make a heartbreaking decision.

Though the ending is far more tragic than ‘Vicky and Her Mystery’ and also the protagonist is a domestic dog, both Old Yeller and Mystère have a deep effect on Travis and Vicky’s lives respectively. The animals help them come to terms with missing their parents, as well as teach them a sense of responsibility. Another common point is the beautiful depiction of the relationship between and child and their pet. 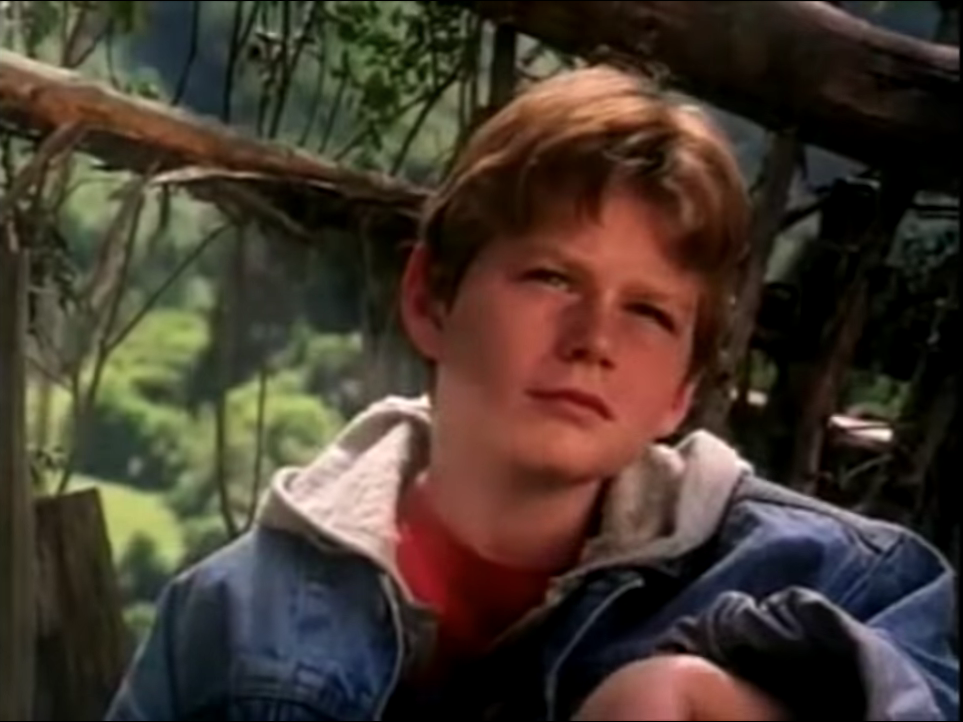 Directed by Christopher Cain, ‘The Amazing Panda Adventure’ is a family adventure movie starring Stephen Lang, Yi Ding, and Ryan Slater. It follows 10-year-old Ryan, who reluctantly travels to China to visit his father Michael who works with pandas in a forest reserve. Upon his arrival in China, Ryan accompanies his father, Ling, a young girl who works as a translator, and her grandfather Chu to rescue a trapped mother panda. Even though they save the mother, the poachers escape with the cub.

Ryan then sets out to rescue the cub along with Ling, and the poachers cause various obstacles for the duo along their way. Over time, Ryan forges an adorable friendship with the cute panda cub and is eventually able to return it safely to its mother in the reserve. Like Mystère helps Victoria adapt to her new environment and gives her a sense of purpose, the panda cub does the same for Ryan. In addition, both movies speak about the endeavors of young children to protect animals and the empathy for all living beings that drives them. 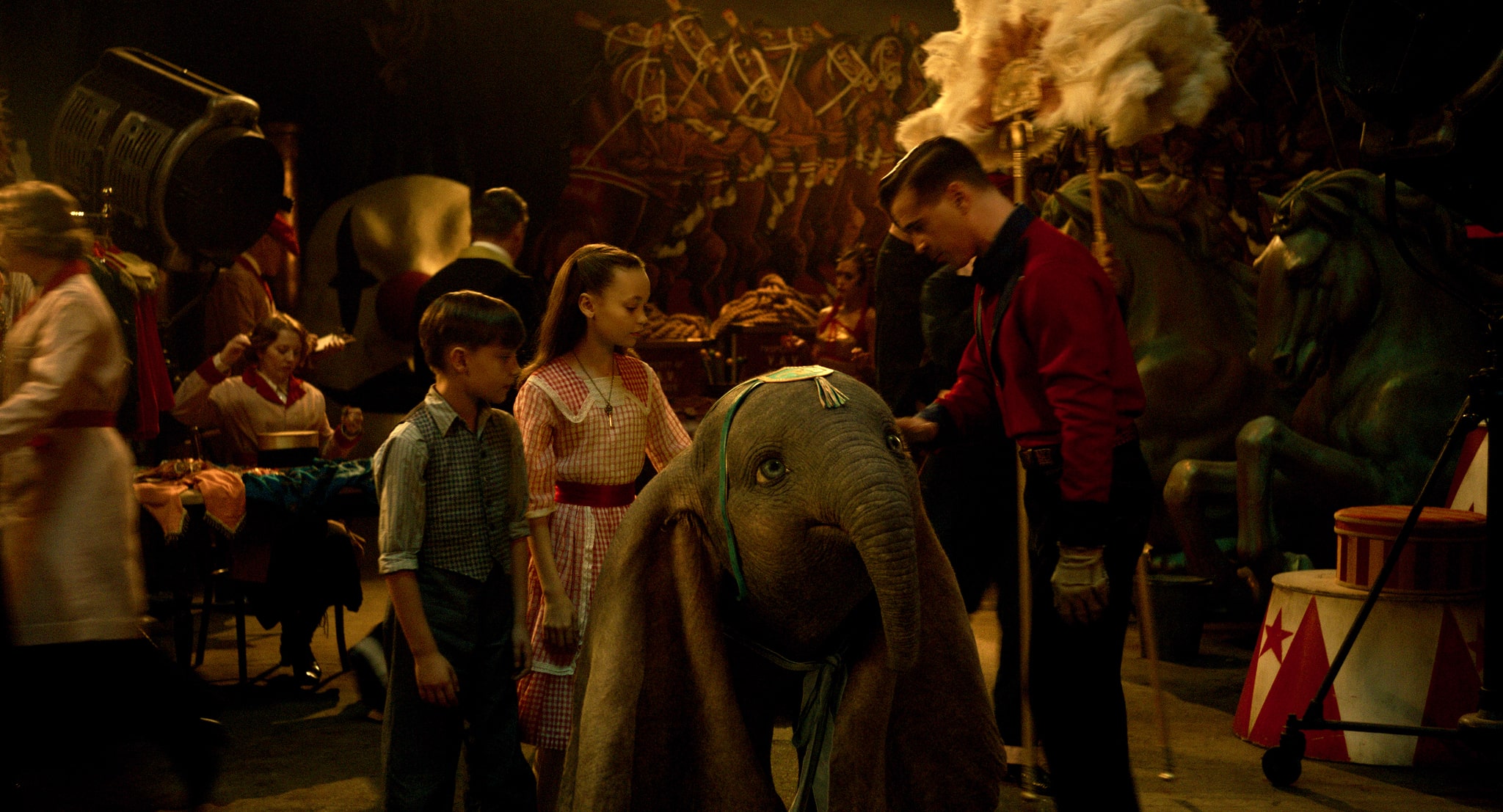 Directed by Tim Burton, ‘Dumbo’ is the live-action adaptation of the eponymous Disney classic and comprises a stellar cast including names like Colin Farrell, Alan Arkin, Danny DeVito, Michael Keaton, and Eva Green. The story follows Dumbo, an adorable baby elephant born in the circus with gigantic ears that enable him to fly. When his mother is sold off after an aggressive outburst while protecting her son, a distraught and scared Dumbo is comforted by Joe and Milly, the kids of his mother’s caretaker Holt Farrier.

The Farrier children befriend Dumbo and help him discover his flying skills, thus making him a famous spectacle in front of the circus audience. Hearing of Dumbo’s magical abilities, the wealthy amusement park owner V.A. Vandevere acquires the circus troupe and forces Dumbo to perform at his establishment Dreamland where Dumbo’s mother also lives. When Vandevere decides to kill both the elephants, the Farrier family sets out to rescue them and release them back into the wild.

Both the Farrier siblings and Vicky make vast efforts to protect their beloved four-legged companions from the ill intentions of certain characters and fight tooth and nail to reunite them with their mothers in their natural habitats. Also, the two movies emphasize the facts that animals truly belong in the wild, but despite their unpredictable natures, they are receptive to love and care. 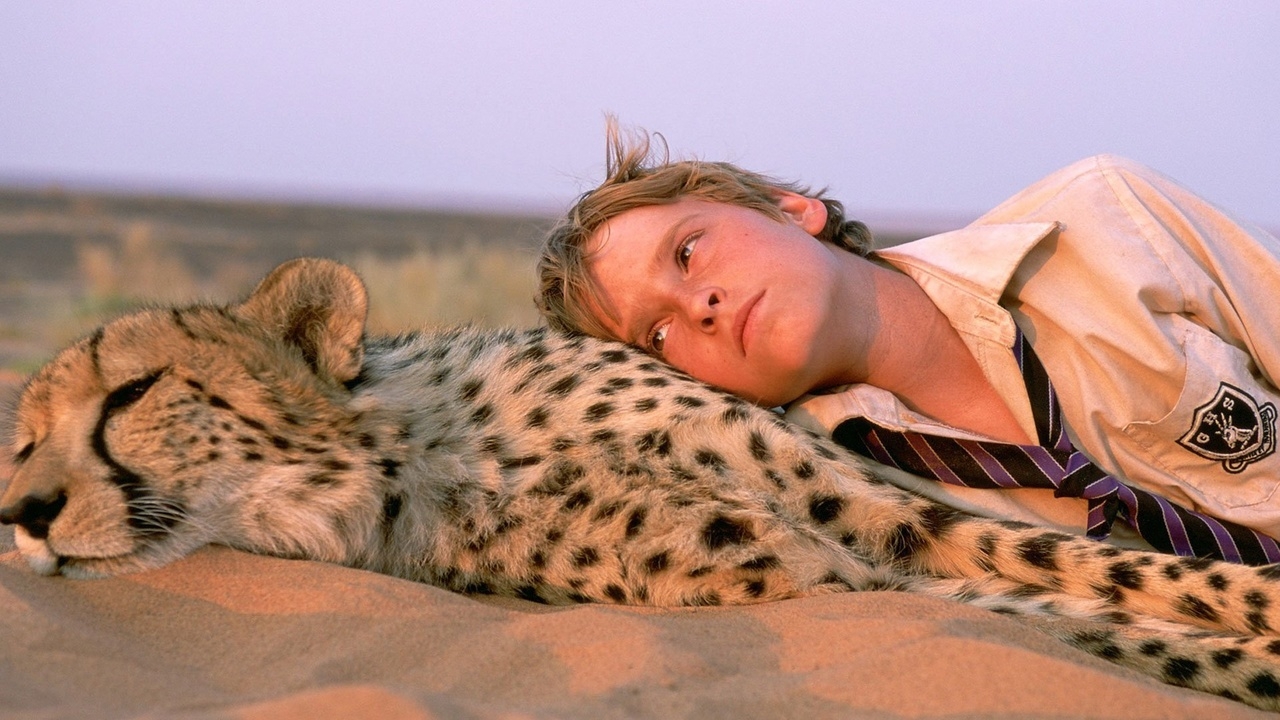 ‘Duma’ is a family adventure film directed by Carroll Ballard starring Alexander Michaletos, Eamonn Walker, Campbell Scott, and Hope Davis. The movie follows Xan, a young boy who discovers an orphaned cheetah cub on the roadside and decides to rescue and raise him. Xan names him Duma, and after facing initial reluctance from his father Peter, the cheetah eventually ends up becoming a part of the family. However, as Duma grows up Peter feels that he should be reunited with his natural habitat.

Though reluctant at first, Xan eventually agrees for Duma’s sake but unfortunately, Peter passes away before they can execute their plan. When Xan takes the task upon himself, he and Duma face several perils on their journey but help each other out of various dangers, along with the aid of Ripkuna, a mysterious drifter. Xan is finally able to release Duma back into the mountains where he belongs.

Again, the ending is highly reminiscent of ‘Vicky and Her Mystery,’ culminating in the journey of returning a wild animal to its true home. Just like Vicky rescues the wolf Mystère and chooses to raise him despite the reluctance of her father Stéphane, Xan also raises Duma similarly facing hesitation from Peter. Moreover, both the children take the help of their fathers to reunite their furry friends with the wild. Lastly, both the movies primarily focus on the unconditional love between an animal and a child, despite the fear regarding the animal’s instinct. 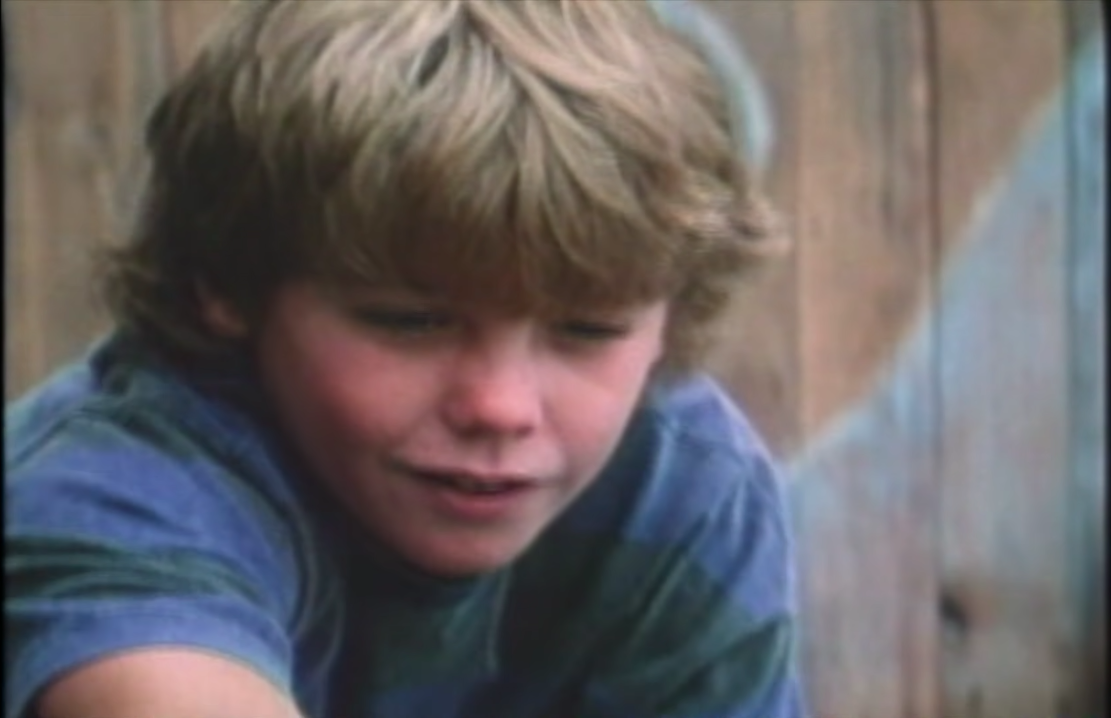 A family drama movie directed by Simon Wincer, ‘Free Willy’ stars Jason James Richter, Lori Petty, James Atkinson, and Michael Madsen, among several others. It revolves around Jesse, a troubled twelve-year-old boy who encounters Willy, an orca whale at the theme park where he serves his probation. An unlikely friendship forms between them both and Jesse also learns to connect with Willy, with help from his keeper Randolph.

Jesse then gets to know of the owner’s intention of killing Willy due to the losses incurred, and thus embarks on a risky mission to release Willy into the ocean. He is helped by Randolph and Willy’s trainer Rae, as well as his foster parents Annie and Glen. With great difficulty, the team is finally able to set Willy free.

Both these movies highlight how an animal can help heal a child’s traumas, as much like Victoria, Jesse is also suffering from the agony of being abandoned by his mother, which causes him to have issues accepting his foster family. The movies also talk about the greed and selfishness of humans, who separate wild animals from their habitats and harm them for their benefit. Furthermore, both young protagonists display tremendous courage to help the animals go back home.

A family adventure movie directed by Gilles de Maistre, ‘Mia and the White Lion’ consists of Daniah de Villiers, Mélanie Laurent, and Langley Kirkwood as its cast. It revolves around the titular ten-year-old girl, who relocates to Africa with her family where they manage a lion farm. Mia’s initial difficulties of adjusting to the lifestyle change are reduced when she befriends Charlie, a newborn white lion cub on the farm.

When Charlie accidentally injures Mia’s brother, her family forbids her to meet him again. Upon her defiance, the family decides to sell off Charlie for trophy hunting and thus Mia flees with Charlie to take him to a game reserve for white lions.

Despite her parents, the police, and trophy hunter Dirk being on their trail, Mia finally manages to deliver Charlie safely to the reserve after driving across South Africa. Charlie helps Mia adapt better to the changes in her life equally as Mystère helps Victoria. Also, both movies follow the loving bonds between two wild animals and two young female protagonists, the inhibitions of their families, and the cruelty of society.