With changing times, we see a paradigm shift in the way relationships and romance is presented in movies. As society moves toward a more liberal and tolerant way of living, we see an adequate representation of every kind of love story. The contemporary romantic comedy ‘Bros’ revolves around the romantic expedition of two polar opposite men. One thing they do have in common is their fear of commitment. Bobby hosts a podcast, whereas Aaron is a lawyer. Both are equally detached and are not looking for a serious relationship.

When Aaron and Bobby get attracted to each other, they slowly let their guard down to form a strong bond. Directed by Nicholas Stoller, the movie features Billy Eichner and Luke Macfarlane in lead roles. Their love story starts from nowhere but takes them exactly where they are meant to be. If you want to watch movies that feature a sweet gay love story with a hilarious sequence of events, then the following suggestions are perfect for you. You can watch most of these movies similar to ‘Bros’ on Netflix, Hulu, or Amazon Prime. 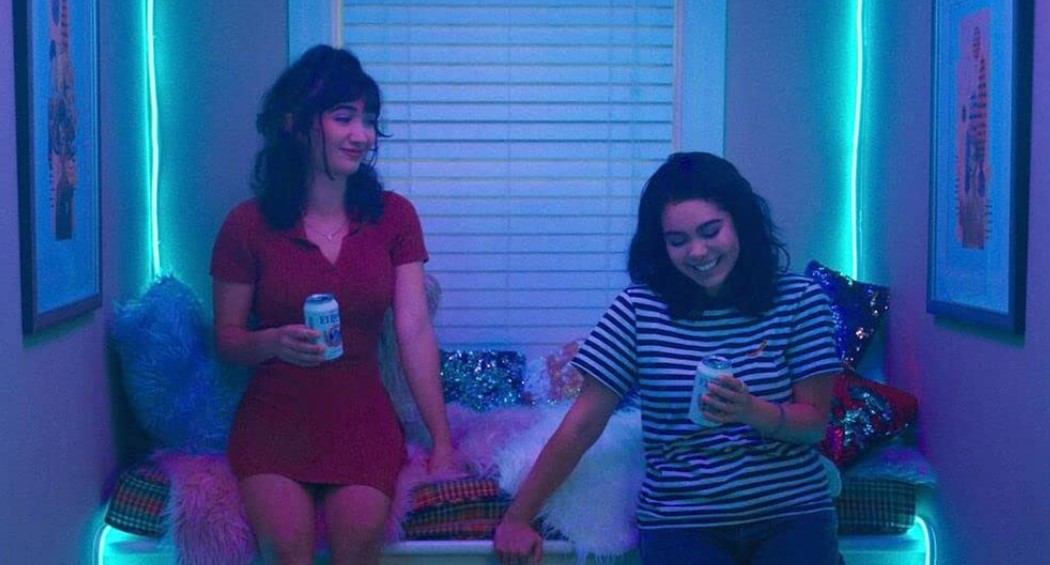 ‘Crush’ revolves around an openly queer girl named Paige, who is navigating through high school. The catch? She has not been in a relationship yet. Paige is an artist and finds beauty in the mundane. However, her perspective toward love changes when life offers her two choices. The romantic comedy movie follows Paige’s experiences as she figures out what love means to her.

Helmed by Sammi Cohen, the Hulu original movie offers a window into the complicated love lives of high school students. Furthermore, like the movie ‘Bros,’ this movie also features closed-off and detached characters who become vulnerable when cupid’s arrow strikes their hearts.

In the gay romantic comedy ‘John Apple Jack,’ which is set in the restaurant business, a playboy and a virgin cross paths. Passions flare up as John’s life spins out of control after discovering that Jack, his adolescent sweetheart, is engaged to his sister. The story of the movie is rich in aspects of heterosexual and queer relationships. Like ‘Bros,’ the Monika Mitchell directorial also features the attraction between people who are completely different and misunderstood in their own right.

Written and directed by Craig Johnson, ‘Alex Strangelove’ is a romantic comedy that follows the titular character Alex, who is a bright and nerdy student. He has been with Claire for a long time, and the couple decides to sleep together. However, when a gay guy enters Alex’s life, he starts getting confused and struggles to comprehend his sexuality.

The central narrative of the coming-of-age movie hits all the right notes when it comes to representation and inclusion. It depicts a clear picture of the struggle of today’s dating world. Like ‘Bros,’ ‘Alex Strangelove’ also hints towards a comparison between heterosexual and queer relationships. Both movies present accurate depictions of the different stages of a queer relationship. 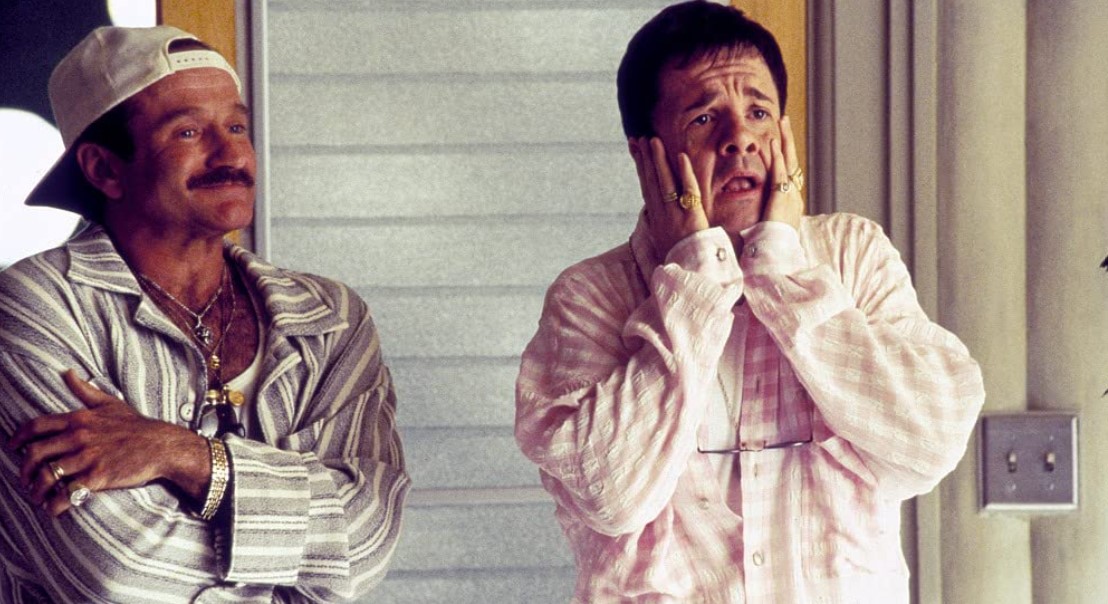 ‘The Birdcage’ is based on Jean Poiret’s play ‘La Cage Aux Folles’ and is directed by Mike Nichols. The Goldmans put up a front to impress their son’s girlfriend and her parents. As the latter is a conservative family, Armand and Albert, a gay couple, have to pretend to be heterosexuals. What follows is a hilarious sequence of events, accentuated by Robin Williams’ brilliant acting prowess. The notion of having a masculine and a feminine partner in a queer relationship is presented in both ‘Bros’ and ‘The Birdcage.’

Directed by Julie Davis, ‘All Over The Guy’ is a romantic comedy that features the love story of two couples – one straight and one gay. When Jackie and Brett fall in love, they set their respective best friends, Tom and Eli, up with each other. However, the latter couple runs away from love and each other. They begin warming up to each other but are soon hit by a galore of issues.

Similar to the comedy movie ‘Bros,’ this dysfunctional drama also presents how people set their friends up with other people they know. A portion of the dating world works on this principle where someone sets two people up. Bobby’s straight friends also urge him to find love and settle down, just like Brett and Jackie do for their best friends.

Based on a true story, The comedy movie is adapted from Steve McVicker’s book ‘I Love You Phillip Morris: A True Story of Life, Love, and Prison Breaks.’ It follows the life of Steven Russell, who seems to have it all as a cop and a married man. However, in order to get some thrill in life, he comes out as a gay man and relocates to Florida, where he slowly turns into a con man. When Steven is sentenced to prison, he meets Phillip Morris, and the two fall deeply in love.

Steven will stop at nothing to be united with the love of his life, Morris. ‘I Love You Phillip Morris’ is a hilarious watch with Jim Carrey’s breakout performance along with actors Ewan McGregor and Leslie Mann. The love and bond shared by Russell and Morris are very similar to the relationship between Bobby and Aaron. Both movies present an honest portrayal of gay relationships. 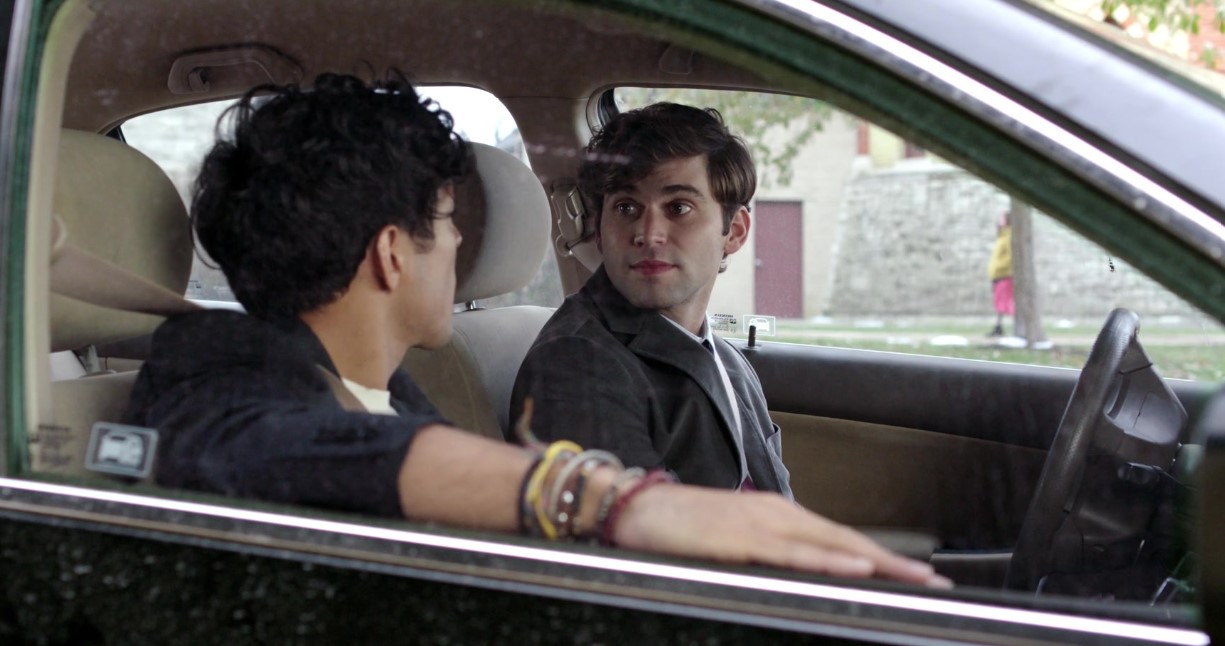 The Freeform original movie ‘The Thing About Harry’ tells the story of how destiny brings together two high school enemies. Sam is gay and traumatized by bullying in school. Years later, Sam and Harry are coerced into driving to a friend’s party together, and that too on Valentine’s Day. When Sam learns Harry is pansexual, he starts feeling differently.

Directed and co-written by Peter Paige, the romantic comedy follows the opposites attract trope, which is similar to the attraction between Bobby and Aaron in ‘Bros.’ Both love stories offer an insight into the world of queer relationships and navigating through issues in the same. 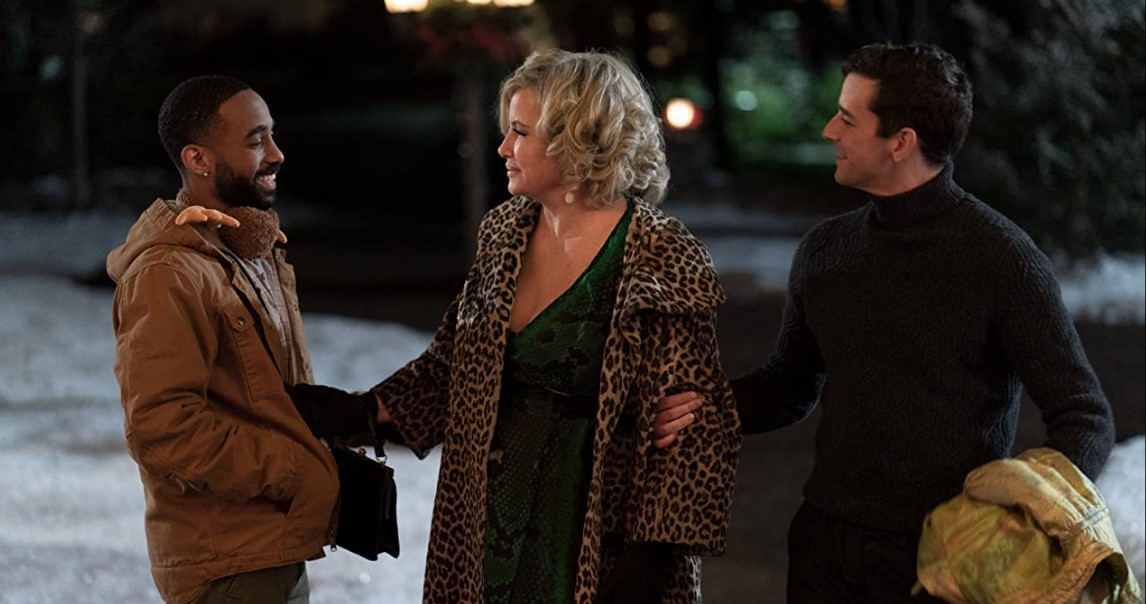 ‘Single All The Way‘ follows Peter and Nick, who have been friends for a long time, and live together as roommates. Peter’s family constantly nags him to get into a relationship so that his troubles go away. He is a desperate friend who asks his roommate to pose as his boyfriend for the holidays in an attempt to escape his perpetual singleness. However, soon, the pretend relationship turns into something serious.

Peter and Nick realize they have been ignoring to see what’s been in front of them this whole time. Directed by Michael Mayer, the romantic comedy movie explores the struggles of finding a good queer partner and relationship, which are not so different from the ones heterosexuals face. This aspect has been equally highlighted in the movie ‘Bros’ as well.