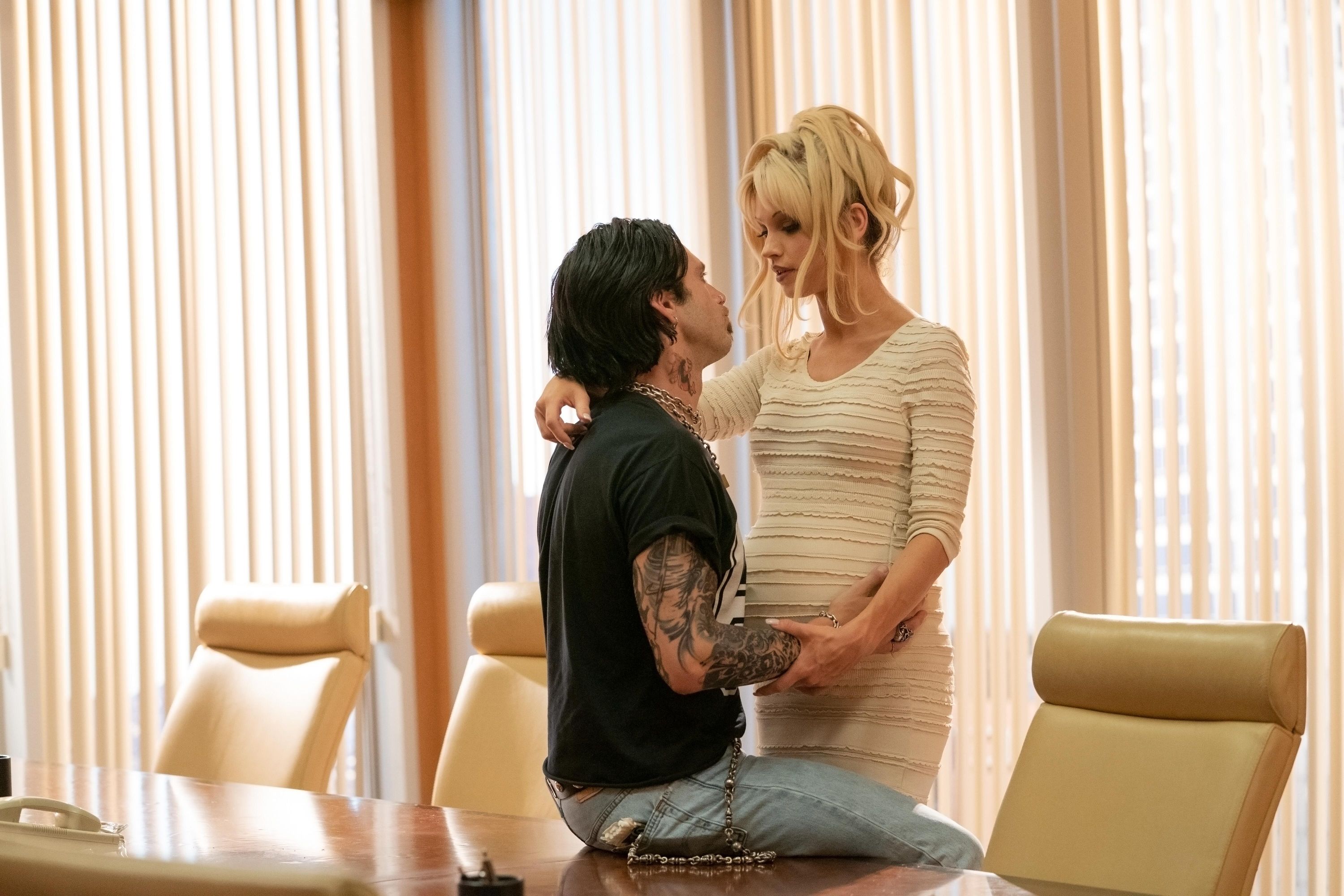 The ‘Pam & Tommy’ finale, titled ‘Seattle,’ follows the turbulent aftermath of the titular couple’s private tape going public. As Pamela fittingly says, every time she thinks it’s over, the video pops up somewhere else. As she and Tommy grapple with their strained relationship and upcoming child, Rand also has some profound realizations of his own.

Meanwhile, so far in the shadows, the young Seth Warshavsky finally makes his move, leading to an outcome no one would’ve thought to be likely. Most of the storylines are tied up, but there is no escaping the emotionally messy ending for all the show’s central characters. Let’s take a closer look at ‘Pam & Tommy’ episode 8, the series finale, and soak in all its wild details. SPOILERS AHEAD.

The series finale opens in June 1996, with Tommy’s band Mötley Crüe releasing their new album and showing fans some love with a gig outside a Tower Records store. Things, however, don’t seem to be going too well for the metal band as they find themselves bumped from being the headliner at a televised MTV concert. Meanwhile, a visibly pregnant Pamela auditions for a few movies but, frustratingly enough, fails to get a part even in the Mike Myers “Bond spoof.” The celebrity couple’s private tape is now being openly publicized in the news, on television, and in pornography magazines.

All hopes of the media frenzy dying out are tragically dashed when the video becomes available online for free. The man behind streaming the sex tape online is young Seth Warshavsky, owner of the Internet Entertainment Group, who is looking for a way to boost traffic to his adult cam websites. Tommy is furious and wants to sue Seth, only for the latter to then approach the couple, asking them to sell the rights to the tape.

With the court determining that it is legal to broadcast the tape for free, Seth offers that if the couple agrees to sell him the rights, he will pull down all illegal online versions of the video and only offer it to paying customers. With the promise that it will drastically lower the online audience of the video, Pamela is tempted to sign over the rights. Tommy, however, violently opposes the idea.

Meanwhile, Rand, who has been making collections for the mob in order to repay his debt, is told by Louis “Butchie” Peraino that he can buy his way out of his debt with a one-time payment of ten thousand dollars. With no way to get the money, the flustered carpenter then has an epiphany and realizes that perhaps stealing the tape was a deeply hurtful act on his part. He tries to apologize to Pamela and Tommy but is ignored by the couple, who are busy trying to salvage their imploding relationship.

Pam & Tommy Ending: Do Pamela and Tommy Break Up? What Happens to Their Child?

After an impromptu vacation ends in disaster, Pamela and Tommy end up back at home, more dejected than ever. The former is frustrated by the chaos and anger that follows Tommy where he goes, while the latter becomes violently frustrated when Pamela refuses to talk to him and merely asks him to sign over the rights of the tape to Seth.

Finally, the young owner of the Internet Entertainment Group gets his hands on the rights to the tape and also seemingly acquires the original from Rand for ten thousand dollars. As the series enters its final moments, Pamela gives birth to her and Tommy’s child but is then seen inking over the tattoo she got when she married the rockstar. Rand gives the money he got for the original tape to Erica and bids her goodbye, and ‘Pam & Tommy’ closes with the infamous tape selling legally and prominently at a record store.

A lot happens in the melancholy closing moments, including the titular couple breaking up. It has been apparent for some time now that their relationship is falling apart, and after Tommy’s violent outburst near the end of the finale, Pamela finally says, “It’s over.” However, it appears the couple doesn’t break up immediately as she then has a child at their Malibu home, and for a moment, Pamela and Tommy look joyful and back in love.

However, the actress subsequently leaves her rockstar husband, and the postscripts confirm that they get a divorce shortly afterward. It also appears that Pamela keeps custody of their young child as the new mother is seen with the baby in the series’ closing moments.

What is the Tattoo Pamela Gets Removed?

A fact that underscores that the titular couple’s relationship is well and truly over is that Pamela gets the tattoo of her former husband’s name removed from her finger. The ink is from when the two get married on the beach in episode 1 after a whirlwind romance and decide to get a tattoo of each other’s names instead of traditional wedding bands. In the end, Pamela is seen getting the tattoo modified, and a quick shot shows us that it now says “Mommy.”

Does Rand Give the Original Tape to Seth Warshavsky?

Rand undergoes a drastic change of heart in the final episode after visiting a soothsayer. He realizes that by stealing the private tape and trying to profit by selling it, he has thrown the celebrity couple’s lives in a tailspin. However, it seems like it is too late, and Rand, despite his regret, is unable to undo any of the damage already caused.

When Seth Warshavsky, the man responsible for streaming the leaked video online for free, shows up at the carpenter’s apartment asking for the original, Rand tries to do what’s right. Despite him vehemently refusing to sell the original tape (which has better image quality than the version in Seth’s possession), it seems like he finally gives in when he finds out how much the adult website owner is willing to pay.

And so, despite all his regrets, Rand takes the ten thousand dollars offered to him for the original and makes the sale to Seth, who, it seems, promptly puts the higher resolution version to use. Perhaps in his one redeeming move, Rand then gives all the money to his long-estranged wife Erica to cover the costs of their pending divorce and all the international calls he made trying to track down Uncle Miltie.

Does Tommy Sign? Who Owns the Rights to the Tape in the End?

It seems like the argument that finally ends Pamela and Tommy’s strained relationship is whether they should sign over the rights to their tape to Seth Warshavsky. The actress believes the adult website owner and thinks that selling the rights will result in audiences having to pay to see the leaked video instead of getting it for free, thus drastically reducing its viewership. Tommy, however, proclaims that the tape is a private recording of their love which he will never sign over for someone else’s profit.

In the end, Tommy does sign away the rights, but only at Pamela’s insistence and when it seems like all other avenues to mend their relationship are exhausted. However, he has a violent outburst just before signing it, which traumatizes Pamela, and soon after he signs, she says that their relationship is over.

In the end, it looks like Seth Warshavsky legally gets the rights to the tape from Pamela and Tommy and also obtains the original from Rand. Thus, it is the ambitious young adult website owner who seemingly owns the rights to the video. The postscripts also reveal that Seth subsequently sells the DVD rights of the video to Vivid Entertainment for a whopping $15 million.