Ever since the first ‘Star Trek‘ series released way back in 1966, space adventure shows opened up a new horizon of entertainment never witnessed before. This new vista that opened allowed for many creative ideas to come forth which were never in use before, and newer concepts of visual entertainment started being explored. One can also conclude that the series was also a reason George Lucas turned up with the ‘Star Wars‘ franchise, which went on to become one of the biggest film franchises of all time. The repercussions of ‘Star Trek’ can be felt to this very day.

One recent show which has managed to take the world by storm is the Canadian network Space’s ‘Killjoys‘. Created by Michelle Lovretta, the series centers around a four-planet system which is ruled by the Reclamation Apprehension Coalition (RAC). The leading characters of the show, Dutch, John and D’avin, are operatives working for the RAC. As Authorized henchmen, they are not supposed establish links to any planet or government since their work can take them anyplace anywhere. Their job is to protect the entire system from criminal elements and they can go to any extend to make their job is done.

Besides being a space adventure, the show also comes with exciting gunfight sequences, stories about assassins and intergalactic secrets which make for a compelling watch. What makes ‘Killjoys’ stands out as a great show is that the magnificent universe which has been created within the series. There is an interesting history of this universe and of our leading characters which drives the story forward. The class wars among members of this planet also function as a mirror reflecting the social situations in our society within this universe to give the story a more humane outlook. So, without further ado, here is the list of best TV series similar to ‘Killjoys’ that are our recommendations. You can watch several of these TV shows like ‘Killjoys’ on Netflix, Hulu or Amazon Prime. 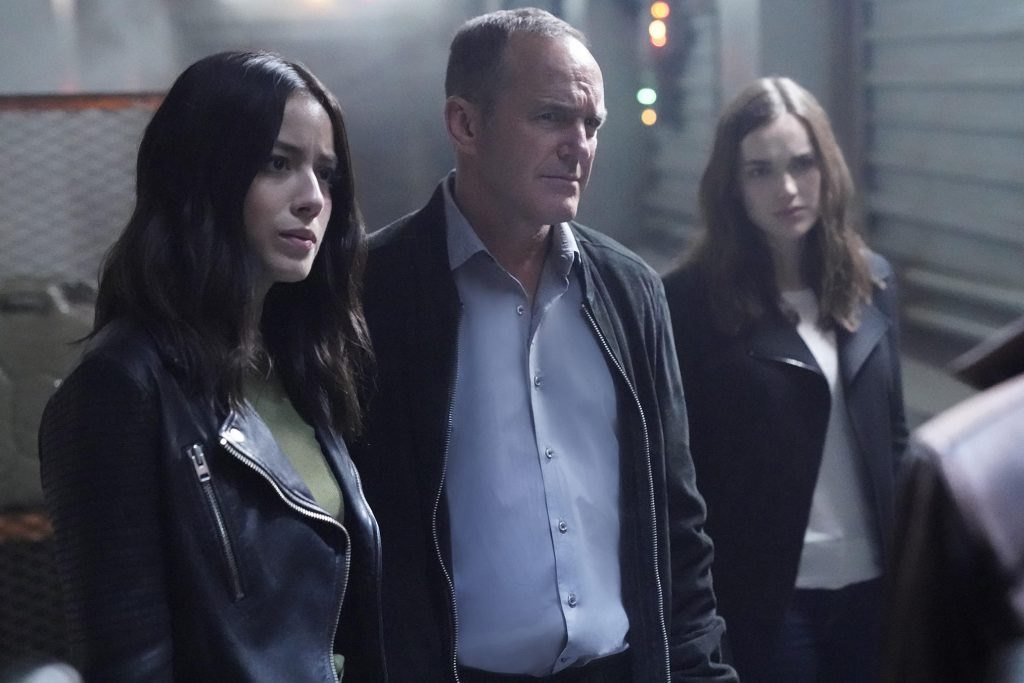 You’ve got to be living under a rock for the past decade if you haven’t heard of the series ‘Agents Of S.H.I.E.L.D. ‘ from ABC and Marvel. The first TV show made on characters from the Marvel Cinematic Universe, ‘Agents of S.H.I.E.L.D.’ follows the adventures of Phil Coulson and his associates who work for the Strategic Homeland Intervention, Enforcement, and Logistics Division. Their job is to protect the earth from the otherworldly threat and doing so in the most discreet manner possible. The character of Coulson is reprised by Clark Gregg whom we first met in ‘Iron-Man‘ (2008). Despite not being a series set in outer space, the reason ‘Agents of S.H.I.E.L.D.’ finds its mention on this list is because of the fact that here the characters are set in a realistic setting and the adventures they undertake are regarding events and antagonists which have to do with the outer world. This is in contrast with what we see in ‘Killjoys‘, where the entire story is set in the outer world, but the problems they face and the battles they fight are very much akin to ours. 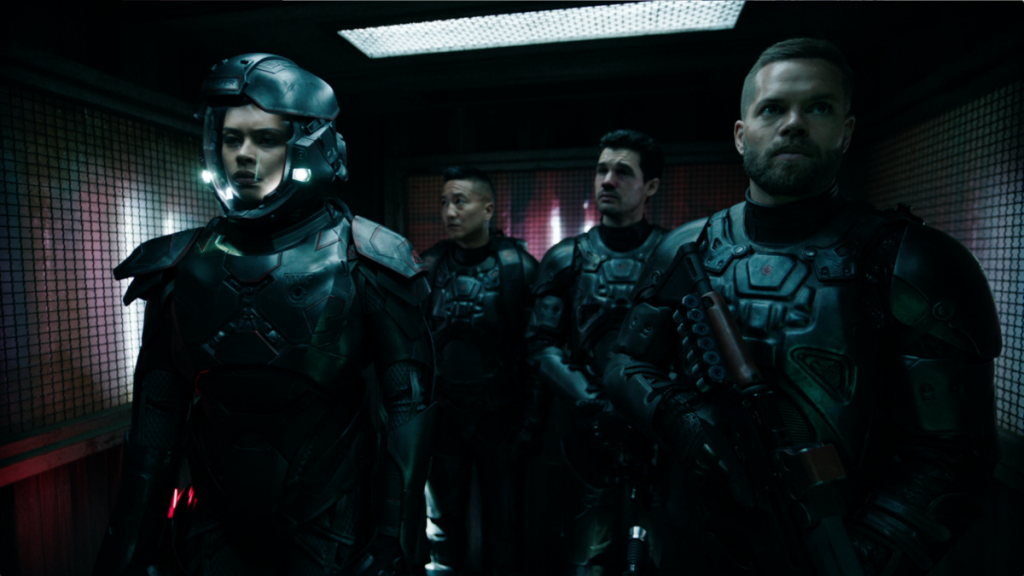 The sci-fi animation series ‘The Expanse‘ is set in an alternate future in which human race have managed to expand their habitat to Mars as well. However, the red planet has grown up as an independent system and its rulers have developed a strong army. With a showdown between forces of the Earth and Mars approaching, the central characters of the story embark on a search for a little girl who goes missing. The story of the show is inspired by a similarly-titled book written by the pseudonymous James S. A. Corey.

After successfully producing three seasons of the show, original network Syfy had announced its cancellation. However, this news faced a massive outrage because of the popularity of the series among the audience. Later, Jeff Bezos announced that the series was being picked up by Amazon Prime. If we look at the story of ‘The Expanse’, we see that it is essentially one about two men looking for a child in the backdrop of ss bloody war. It is their humane qualities which have compelled them to take on this task when the entire planet is in danger. This juxtaposition of a story of human compassion with one of high-tech science fiction and interplanetary war is what has made this series a fan favorite, and that the show has found its way to this list. 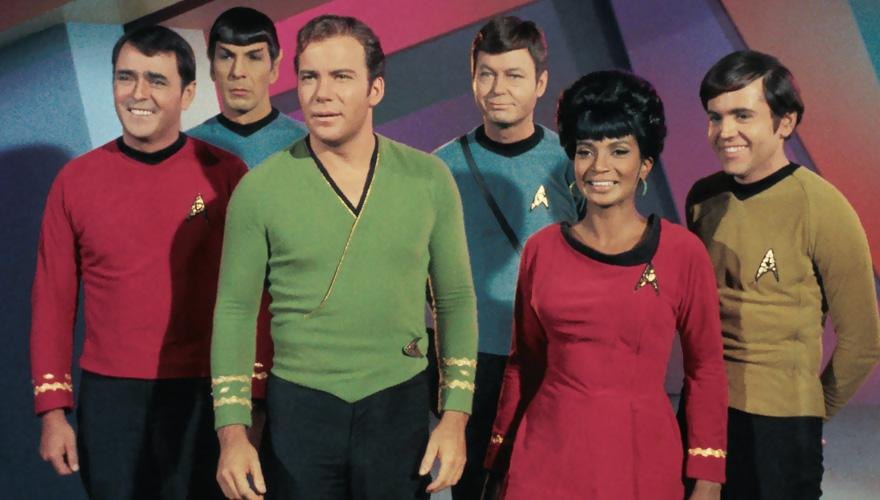 This is where it all started. When ‘Star Trek’ first aired in 1966, the world was not yet aware of the magnitude this show would reach as a cultural phenomenon. There has hardly been any other show which has led to as big a franchise as ‘Stark Trek…’, which spans across 13 feature films, eight TV shows, five animated series, and one television short. Gene Roddenberry is the creator of the original series which centers around the adventures of a spacecraft called USS Enterprise.

Led by Captain James T. Kirk, the show is set in the Milky Way galaxy. Enterprise goes around the entire galaxy looking for newer worlds and civilizations which have remained undiscovered. It now seems surprising why NBC decided to stop producing this influential show only after three seasons. But the truth is that when ‘Star Trek’ first released, it was too new for its time and did not receive much attention either from the fans or the critics. Later, during syndication, the series managed to garner a cult following. When we consider space shows, this is the granddaddy of them all. It is this show’s sheer cultural impact and historical significance which has landed it a place on this list. 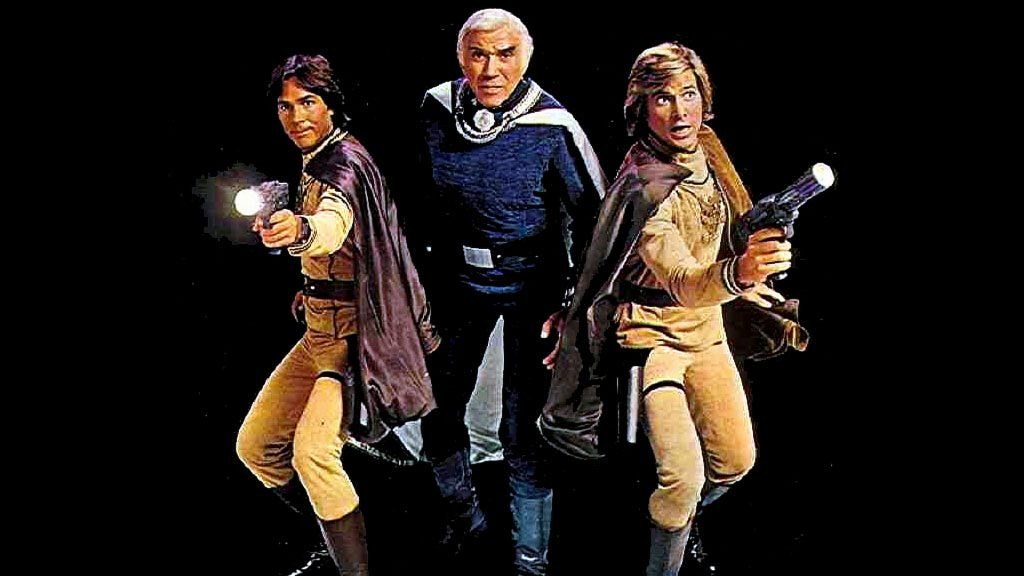 The story of ‘Battlestar Galactica’ is set in the seventh millennium where human beings live on 12 different planets which have formed a coalition together known as the Twelve Colonies of Mankind. These colonies are in a constant battle with the villainous extra-terrestrial beings named Cylons. Battlestar Galactica is the name of a spaceship which is taking a certain number of people to safety where the Ceylons won’t be able to reach them. Created by Glen A. Larson, the series first premiered on ABC in 1978 and did not manage to survive for more than a season.

However, ratings were not the reason why ABC pulled the plug on the show. The network cancelled it because the show was too expensive for them to produce. However, the network came out with a sequel of the series called ‘Galactica 1980’ after one year. When ‘Battlestar Galactica’ first released, it was accused of anti-Soviet propaganda by Soviet newspapers and plagiarism by 20th Century Fox. ‘Battlestar Galactica’ remains a classic space science fiction series which has been greatly influential on its successors, and its cultural importance in American television is the reason the show finds a place on this list. Interestingly enough, there are a number of quasi-religious references throughout the show where the makers seem to attempt in merging Mormon theology with modern scientific ideas. 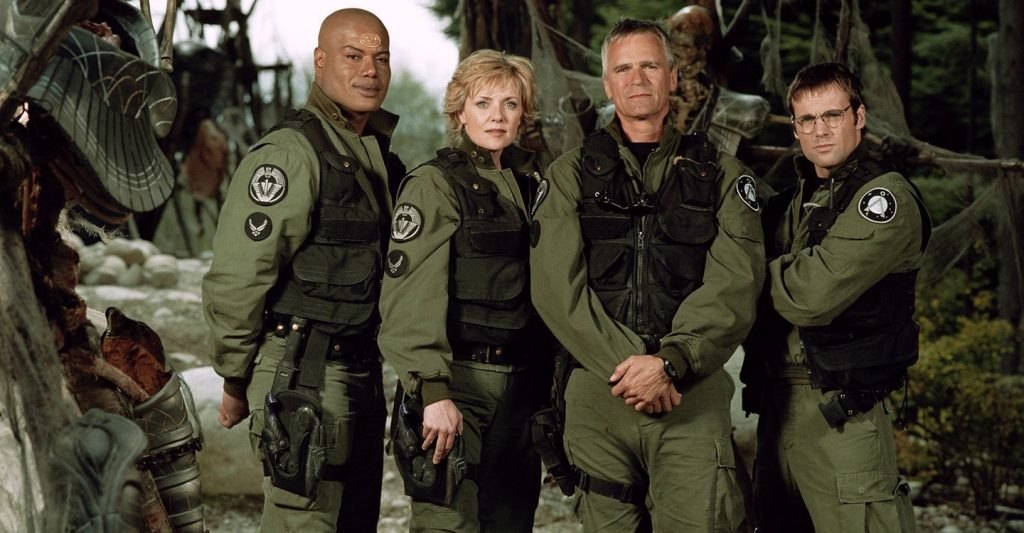 If 20th Century Fox has ‘Star Wars,‘ and Universal Studios has ‘Battlestar Galactica,’ then Metro-Goldwyn-Mayer have their own ‘Stargate‘ franchise. However, the series is not the first product of this franchise and actually follows their 1994 feature film. The central character of the series is Colonel Jack O’Neill, who has been assigned the task of going to distant on a covert operation to learn about Stargate technology. This technology enables rapid transportation from one part of the universe to another.

This is not favorable news for humans as an alien race called Goa’uld plans to use humans as a host. What is interesting about this show is a futuristic story peppered with ancient mythological references involving space and time travel. It only goes on to show that no matter the time we exist in, certain human emotions and reaction to certain situations have always remained the same. Thus it becomes so seamless to interweave historical and futuristic stories together. The series became a huge hit for MGM and even began rivaling their feature film franchise, James Bond.