A period psychological thriller set during the late 19th century in England, ‘The Alienist‘ is adapted from the novel of the same name written by Caleb Carr. Daniel Brühl, Luke Evans, and Dakota Fanning play the three lead characters in the series. Brühl plays Dr. Laszlo Kreizler, a psychiatrist and a criminal psychologist who has been called to New York by his friend from Harvard, Theodore Roosevelt, who is working as a police commissioner. Kreizler finds out that several young male prostitutes are being murdered in New York, and it is to understand the psychology of the killer that he has been asked by his friend to visit New York. He is joined by a newspaper illustrator called John Moore and Roosevelt’s secretary Sara Howard.

Surprisingly enough, Kreizler meets with opposition from certain members of the high society in New York who apparently don’t want the murders to be solved. They are using the police department to force Kreizler to abandon the case. The series was praised for its setting and plot, but ended up getting mostly mixed reviews from critics. However, if you enjoyed watching the series and are looking for shows that are thematically and stylistically similar to this one, then you have come to the right place. Here’s the list of best shows similar to ‘The Alienist’ that are our recommendations. You can watch several of these series like ‘The Alienist’ on Netflix, Hulu or Amazon Prime. 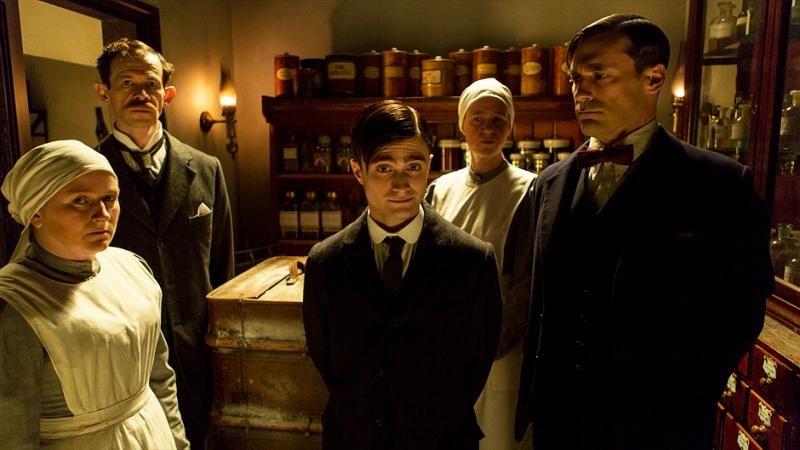 John Hamm and Daniel Radcliffe star in this period drama set in Russia in the early years of the 20th century. The character that both the actors portray is Dr. Vladimir Bomgard. He is a doctor at the Muryevo Hospital, where he constantly proves his vast knowledge in the field by giving patients flawless diagnoses of their diseases. The series is set during 1917’s Russian Revolution, which was followed by the Russian Civil War. Thus, the number of patients also keep on increasing every single day. The constant pressure of work drives him from chain smoking to becoming addicted to morphine. The story carries on as Bomgard grows older. We see him talking to his younger self by reading his diary and transporting to the past, mentally. There is a darkly comedic undertone in the story which keeps it interesting and engaging for the audience. 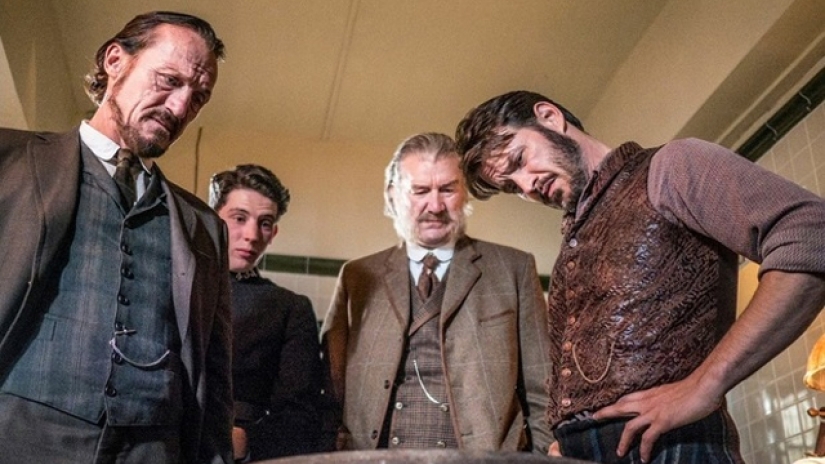 Set in London’s East End, the story of ‘Ripper Street’ begins around six months after the killings of Jack The Ripper that sent shockwaves across England. The story centers around cops working for the H Division of the London Metropolitan Police. The area under their control is populated with lowlifes, brothels, and factories. Suddenly, one day, the killings begin again, this time in the area under the H Division. Matthew Macfadyen, Jerome Flynn, and Adam Rothenberg play the lead characters of the show. The series got positive critical response and became a major success for the BBC. However, poor viewership ratings from the third season onwards forced BBC to call it quits, only for Amazon Prime to jump in and save the show. 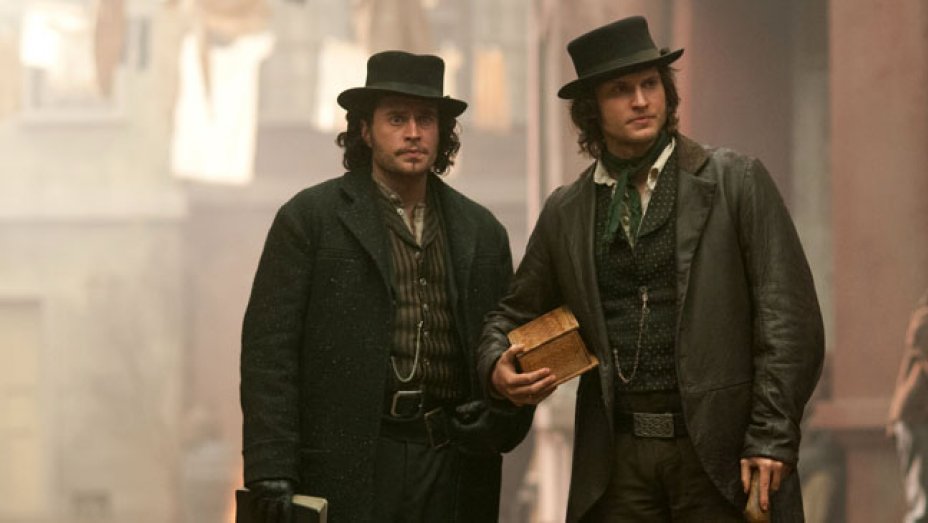 This BBC America series revolves around its protagonist, named Kevin “Corky” Corcoran. He is an Irish immigrant who fought for the Union Army during the Civil War and is currently a police officer working in New York. His job is mainly to maintain peace in the Five Points neighborhood in New York City. While working on his job, Corky is also busy looking for his wife and daughter. Interestingly, ‘Cooper’ is BBC America’s first-ever scripted original series. 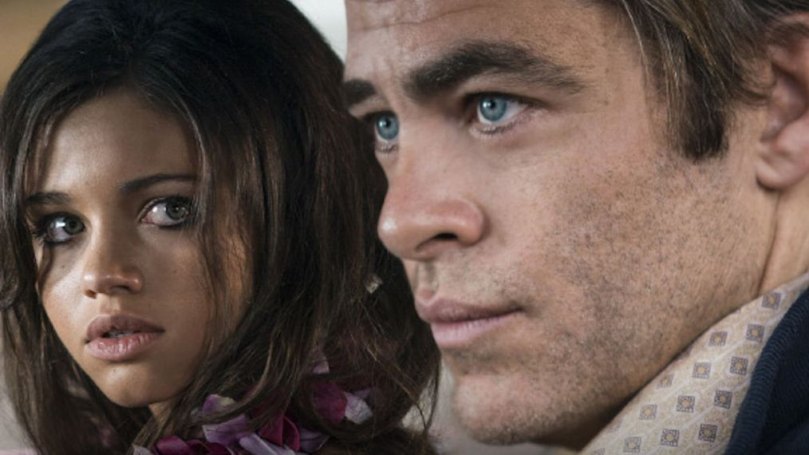 Created and written by Sam Sheridan, this miniseries is inspired by Fauna Hodel’s memoir ‘One Day She’ll Darken: The Mysterious Beginnings of Fauna Hodel’. Hodel’s grandfather was one of the prime suspects in the infamous Black Dahlia murder case that rocked the United States in 1947. India Eisley plays the character of Fauna Hodel in the series. We follow Fauna as she digs deeper into the Black Dahlia mystery and finds the case leading to a psychiatrist with deep secrets hidden. The series premiered at the American Film Institute’s AFI Fest. It received positive reviews from critics, though some complained about the slow pacing of the narrative. 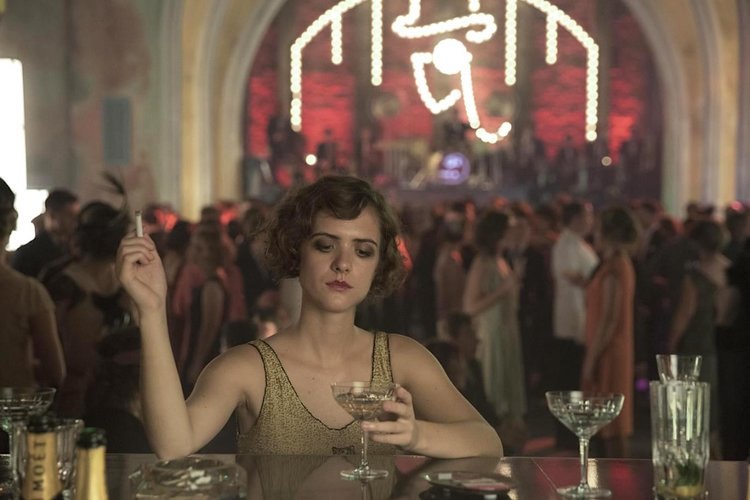 One of the most positively received neo-noir crime dramas to release in 2017, ‘Babylon Berlin‘ is a period piece set in the German capital during the Weimar Republic, a government formed after the First World War which lasted until the Nazi Part took charge in 1933. The leading character of the series is a police inspector called Gereon Rath. He has been sent to Berlin from Cologne on a case involving a dangerous extortion ring. The unique aspect about this show is that Rath himself is tormented by the war and suffers from PTSD and survivor’s guilt, which has been with him since his brother passed away in the war.

Another interesting character called Charlotte Ritter gets involved in the case. She is a flapper, a young woman showing disdain for traditional customs, and wants to be a homicide detective in the Berlin Police Department. The series received unanimously positive critical acclaim, with some saying that it covers the same aesthetics as the classic German films like ‘Metropolis’ (1927) and ‘The Cabinet of Dr. Caligari’ (1920). 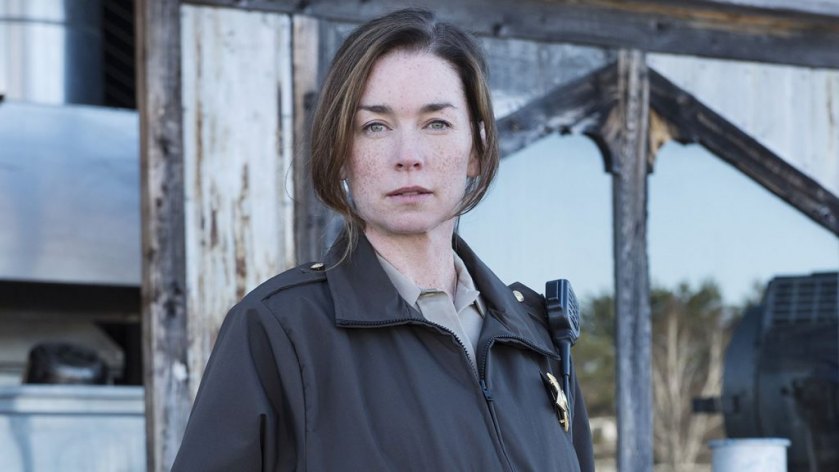 ‘Eyewitnesses’ is inspired by a Norwegian series of the same name. The story focuses on two teenage boys who one day end up witnessing a triple homicide while they are making out in a deserted cabin. It is later revealed that the murders are related to clashes between two rival gangs. The series received critical acclaim, but poor viewership ratings made USA Network cancel the show after the first season. 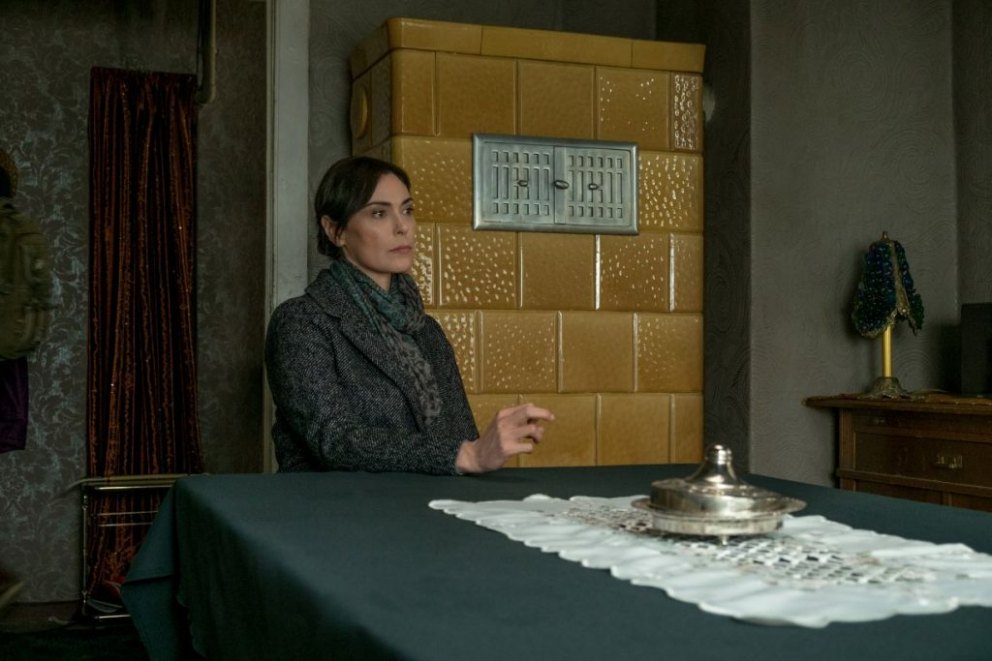 Olen Steinhauer created this drama series that stars Richard Armitage in the leading role. Armitage’s character is called Daniel Miller. He is a CIA agent sent to Berlin to investigate and find out the source of a major leak which has ruffled a few important feathers in America. We follow him as he starts his new life of being a field agent. Later, Miller takes up another mission where he has to infiltrate a far-right political party who are planning acts of terrorism to send their message to the general population. The series received mixed reviews from critics and was canceled after the third season. Criticism has mainly been aimed at the show for being too full of dialogues and characters. 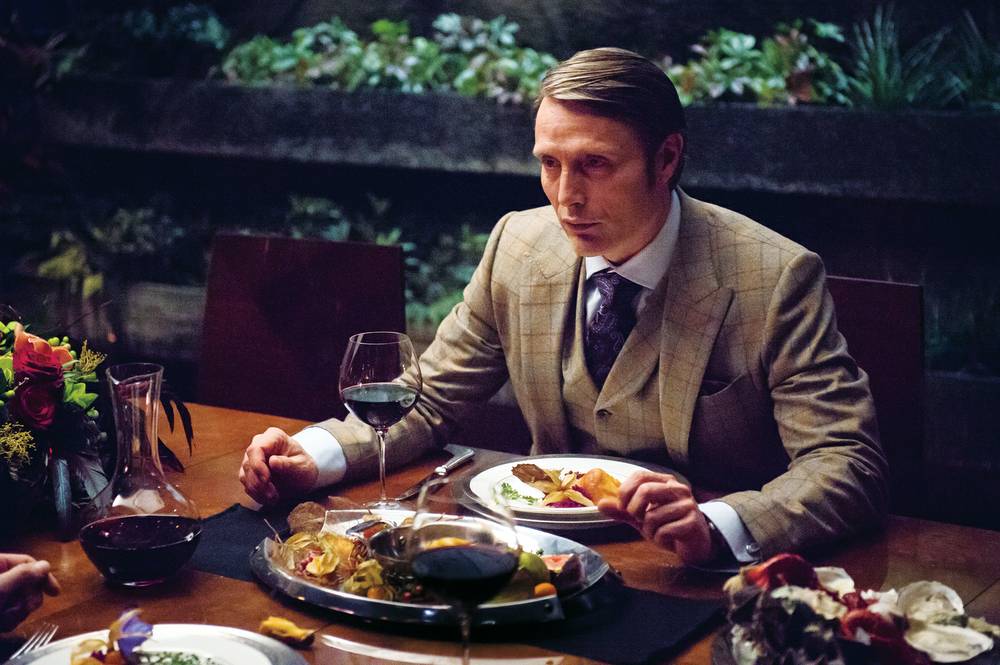 ‘Hannibal’ is based on the Thomas Harris book series of the same name. The central character of the show is Dr. Hannibal Lecter. He is a brilliant psychiatrist who is consulted by the FBI’s Behavioral Wing for certain cases. However, the FBI still do not have any clue that proves Hannibal is a cannibalistic serial killer. FBI profiler Will Graham is the one who works closely with Lecter, and Graham’s ability to look at the crimes from the perspective of the killers and empathize with them is what fascinates Lecter. Lecter often tries to manipulate Graham into being a killer himself. Bryan Fuller, the creator of the series, says that he sees the relationship between Lecter and Graham to be the crux of the show. Numerous viewers and publications have regarded this series as one of the greatest shows ever made. Mads Mikkelsen also drew enormous praise for his portrayal of the famous psychotic killer. 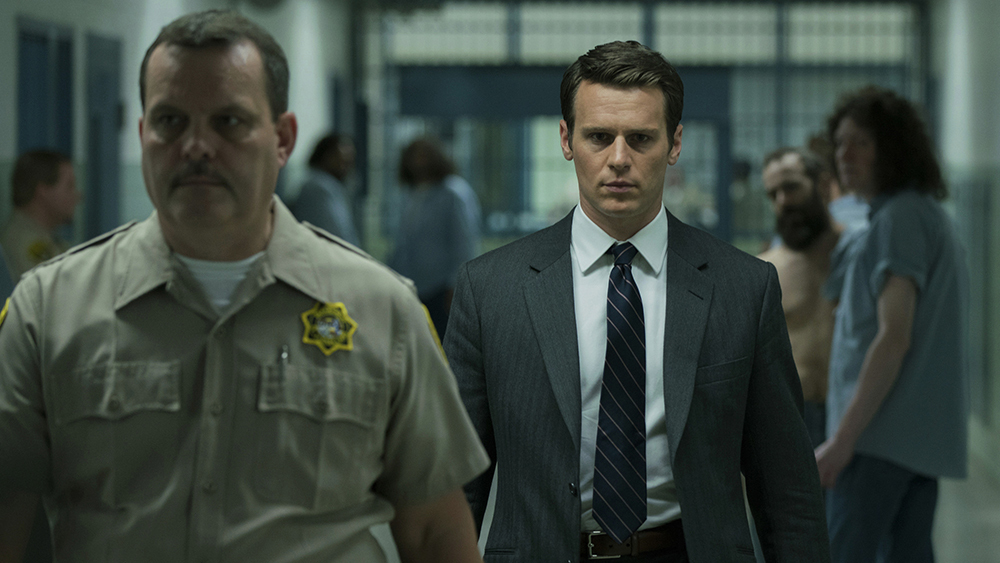 Created by Joe Penhall, ‘Mindhunter’ is a crime drama series that depicts how the FBI’s Behavioral Unit began to profile psychotic killers who follow a pattern and ended up naming them serial killers. The show follows the characters Holden Ford (Jonathan Groff) and Bill Tench (Holt McCallany) as they travel around America looking for killers who can be categorized as such. They interview certain criminals who have been involved in such crimes. Ed Kemper, the famous serial killer also known as the ‘Co-Ed Killer’, becomes one of the main characters of the show as the detectives consult him to understand how the mind of a serial killer really works.

David Fincher and Charlize Theron are executive producers of the show. ‘Mindhunter’ is one of the most influential Netflix original shows to have ever released. The idea for the series began when Theron reportedly gifted Fincher a book called ‘Mindhunter: Inside the FBI’s Elite Serial Crime Unit’. The show was positively received by both critics and audiences.