Where Was Hallmark’s Undercover Holiday Filmed? Who is in the Cast? 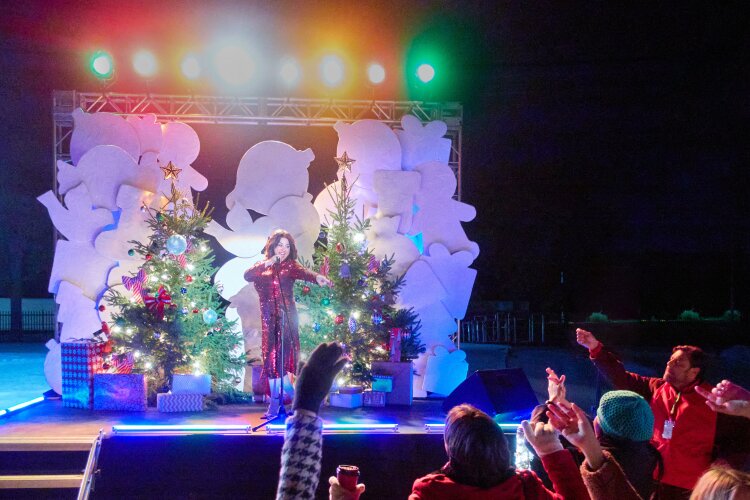 Directed by Bradley Walsh, ‘Undercover Holiday’ is a Hallmark romantic comedy film from the ‘Countdown to Christmas’ line-up. The plot revolves around Jaylen, a new pop star who is set to return home for the holidays. Much like all famous pop stars, she is supposed to be protected by a bodyguard at all times for obvious security reasons. However, bringing a stranger home is out of the question in her conservative household. Jaylen goes out of her way and brings Matt, her overeager bodyguard, to pose as her partner at her family home.

Matt and Jaylen end up having a great holiday with Jaylen’s family, and sparks of Christmas romance are ignited. The pair must choose whether to keep their relationship professional or drop the act and be true to their feelings. The romantic movie deals with numerous interesting themes, an atypical romance, and family traditions, making the viewers hooked on the narrative. In addition, what makes one wonder is the use of intriguing visual backdrops throughout the movie. So, if you wish to find out where ‘Undercover Holiday’ was lensed, let us fill you in on all the details!

‘Undercover Holiday’ was filmed entirely in Ontario, specifically in Brantford and Hamilton. The principal photography for the Hallmark movie commenced in early October 2022 and wrapped up in the same month. Although there are no mountains in the area, there are substantial uplands in Ontario, particularly in the Canadian Shield. It also has several lakes and rivers that are rich in minerals. The province is an excellent location for filming because of its vast and varied scenery, which includes the Hallmark movie. Without further ado, let’s navigate all the specific locations in the romantic comedy film!

Most of the scenes in ‘Undercover Holiday’ was filmed in Brantford in the southwestern part of Ontario. Several areas along George Street — from Darling Street to Dalhousie Street — and Dalhousie Street — from George Street to Market Street — in the city were used to film the Hallmark Movie. The production department had artificial snow-draped Christmas decorations to capture the authentic setting of wintery Christmas.

The Civic Center, intended to accommodate a variety of hockey and skating organizations, athletic activities, neighborhood fundraisers, and live performances, served as the base camp for the whole cast and crew. Filming in Brantford reportedly continued for two days between October 12 to October 14, 2022. According to the City of Brantford, a noise exemption permit was issued to allow filming beyond 11 pm on the aforementioned dates. Over the years, Brantford has hosted the production of several filming projects, such as ‘Let It Snow,’ ‘Welcome to Mooseport,’ ‘Riverfront Romance,’ and others.

A few of the scenes of the Hallmark movie were seemingly shot in Hamilton, in the southern part of the province of Ontario. Situated on the westernmost edge of Lake Ontario, the port city and its surrounding areas have a long history that dates back to before the colonial era due to its ideal geographic location. In addition, Hamilton’s location makes it one of North America’s leading commerce and transportation centers.

Hamilton serves as a favorable filming site for filmmakers because of its suitable backdrops and well-developed infrastructure. The city is also preferred as a setting by those looking forward to making movies throughout the year’s cooler seasons. Hamilton’s appeal as a production location is also significantly influenced by its proximity to Toronto, which constitutes several prominent production facilities. Over the years, the city has served as the backdrop of several Christmas movies like ‘Christmas on Mistletoe Lake‘ and ‘Secrets in the Family.’

Noemi Gonzalez portrays the pop star Jaylen in the romantic movie. You may recognize Noemi from other productions such as ‘The Young and the Restless,’ ‘Selena: The Series,’ ‘The Good Nanny,’ and ‘The Vatican Tapes.’ On the other hand, Stephan Huszar essays the role of Matt. The actor has many Christmas movies such as ‘Time for Us to Come Home for Christmas,’ ‘Christmas in the Rockies,’ and ‘Mistletoe Magic’ to his credit. He can also be seen in ‘Letterkenny,’ ‘Chesapeake Shores,’ and ‘Supernatural.’

Read More: Where Was Hallmark’s The Holiday Stocking Filmed? Who is in the Cast?