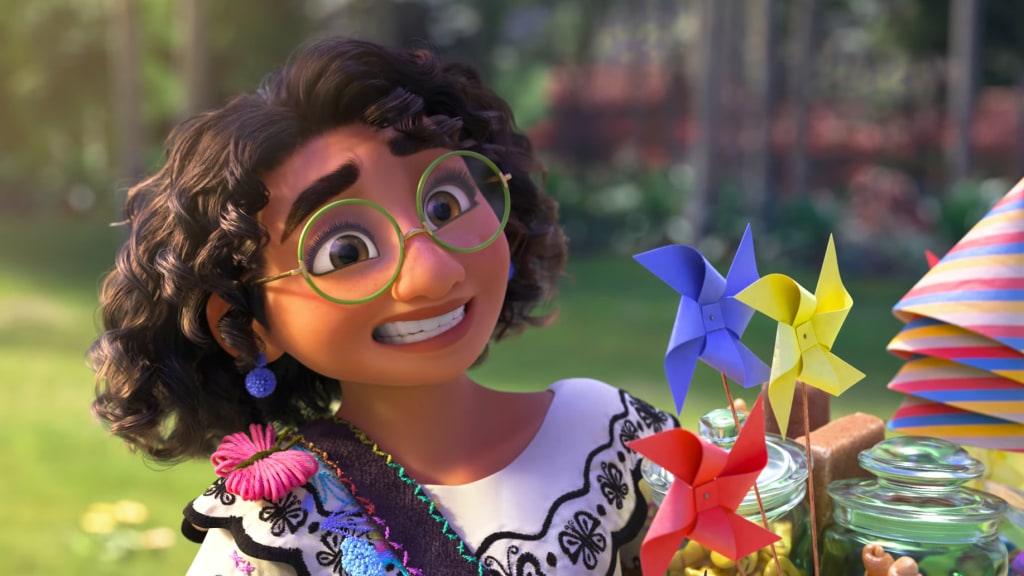 Directed by Jared Bush, Byron Howard, and Charise Castro Smith, Disney’s ‘Encanto’ is indeed a magical tale of family and courage. The animated musical fantasy-comedy tells the story of Mirabel, a young girl from the Madrigal family that is endowed with superhuman powers. Since Mirabel is the only one without powers, she is often ignored by her family. However, in a time of peril, it is this very girl who brings together the family to save their magical family house Casita from getting destroyed.

‘Encanto’ beautifully navigates family dynamics, sibling bonds, and the pressures of expectations on children, and it also has a colorful cultural perspective. The narrative is backed by stirring original songs by Lin-Manuel Miranda, which makes the movie even more enjoyable. If you like watching animated family movies and musicals with touching stories, here is a compilation of similar titles for you to enjoy. You can watch most of these movies like ‘Encanto’ on Netflix, Hulu, Amazon Prime, or Disney+.

‘Monster House’ is an animated supernatural horror comedy movie directed by Gil Kenan that revolves around a house that comes to life to terrorize a neighborhood during Halloween. The movie received multiple award nominations and was praised by both critics and the audience. It follows three children who discover that their neighbor’s house is actually a monster who despises children, and thus they set out to kill it by destroying its heart.

Backed by a stellar voice cast that includes Maggie Gyllenhaal, Mitchel Musso, Catherine O’Hara, and Steve Buscemi among several others, ‘Monster House’ is a slightly scary yet thrilling watch. The monster house bears resemblance to the magical house Casita in ‘Encanto,’ which also comes alive even though not to devour kids. Also, in both the movies, it is children who overcome all obstacles to save the day. 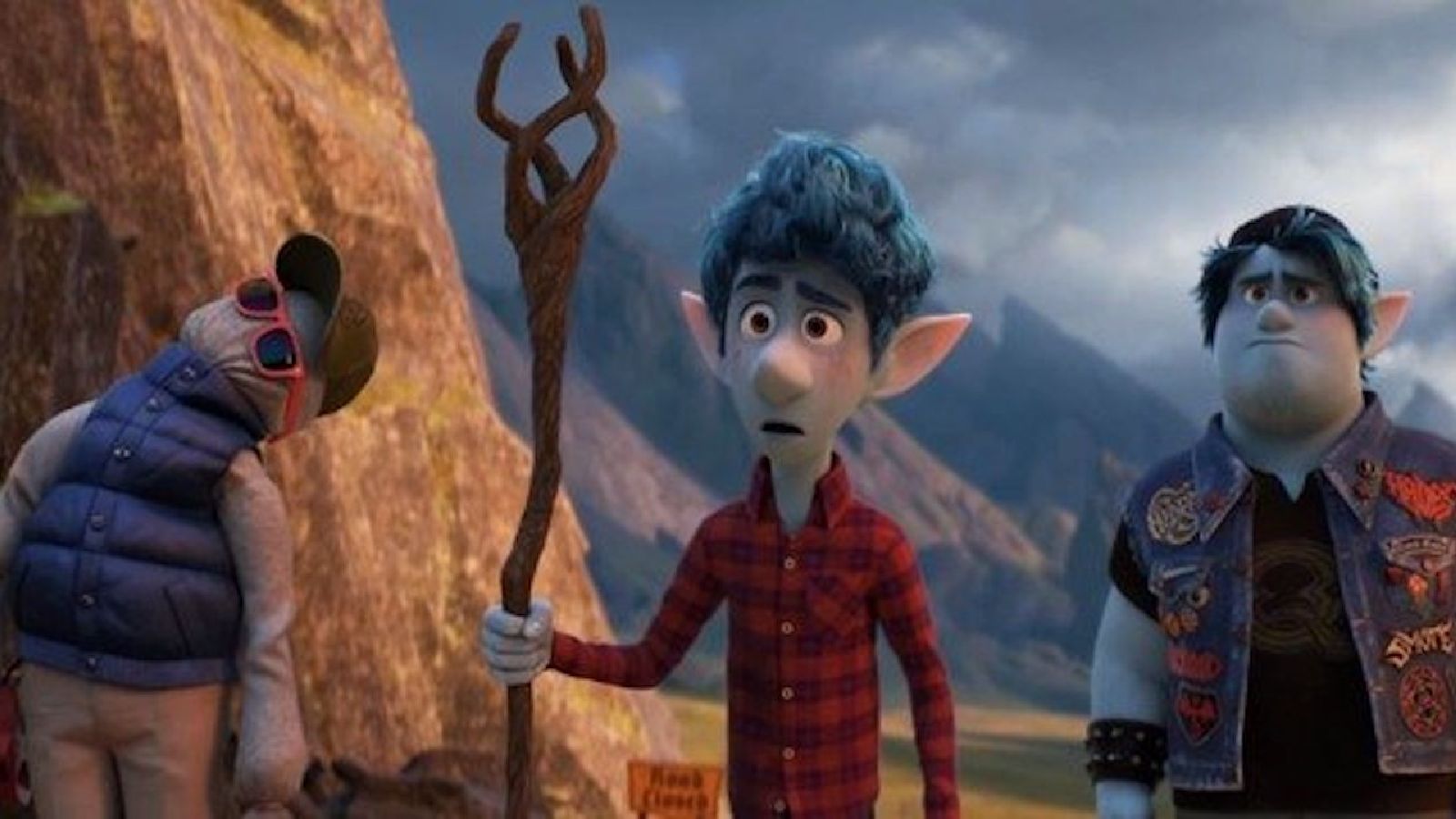 A fantasy adventure film that centers around two elf brothers with contrasting personas, ‘Onward‘ is quite similar to ‘Encanto’ in terms of signifying the importance of a strong sibling relationship. The Lightfoot brothers Ian and Barley set out to seek an artifact that can resurrect their deceased father for a day, and what follows is an adventurous journey that tests their relationship as well as their capabilities.

‘Onward’ is directed by Dan Scanlon, and the voice cast includes prominent names such as Tom Holland, Chris Pratt, Julia Louis-Dreyfus, and Octavia Spencer. Much like ‘Encanto,’ where Mirabel misses her late grandfather Pedro, this movie also explores coming to terms with the loss of a loved one and the strength derived from their memories and love. 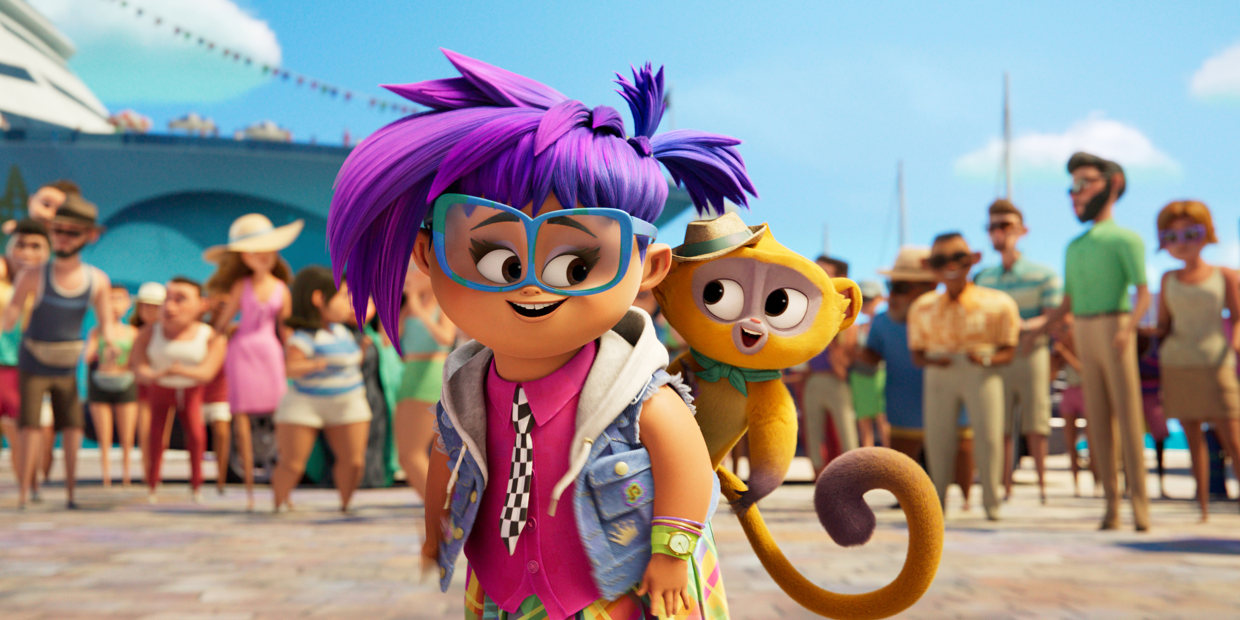 ‘Vivo‘ is an animated musical comedy directed by Kirk DeMicco and Brandon Jeffords and revolves around the titular pet kinkajou who sets out to fulfill his deceased master Andrés’ last wish of meeting his former love Marta and playing a song that he had written for her. On his journey to find Marta, Vivo makes several new friends like his master’s grand-niece Gabi, and his escapades eventually teach him about life and his own best qualities. The movie is backed by a talented voice cast comprising of Lin-Manuel Miranda, Zoe Saldana, Gloria Estefan, Ynairaly Simo, and Michael Rooker, among others.

Apart from the catchy songs written by Miranda, ‘Vivo’ is also similar to ‘Encanto’ in terms of the theme of attachment to family, as Vivo considered his master to be his only family, and also Gabi has regret of not having expressed her love to her late father. It also talks about the importance of one’s inner strength in attaining the impossible and has a slight touch of fantasy given a talking kinkajou as the main character. 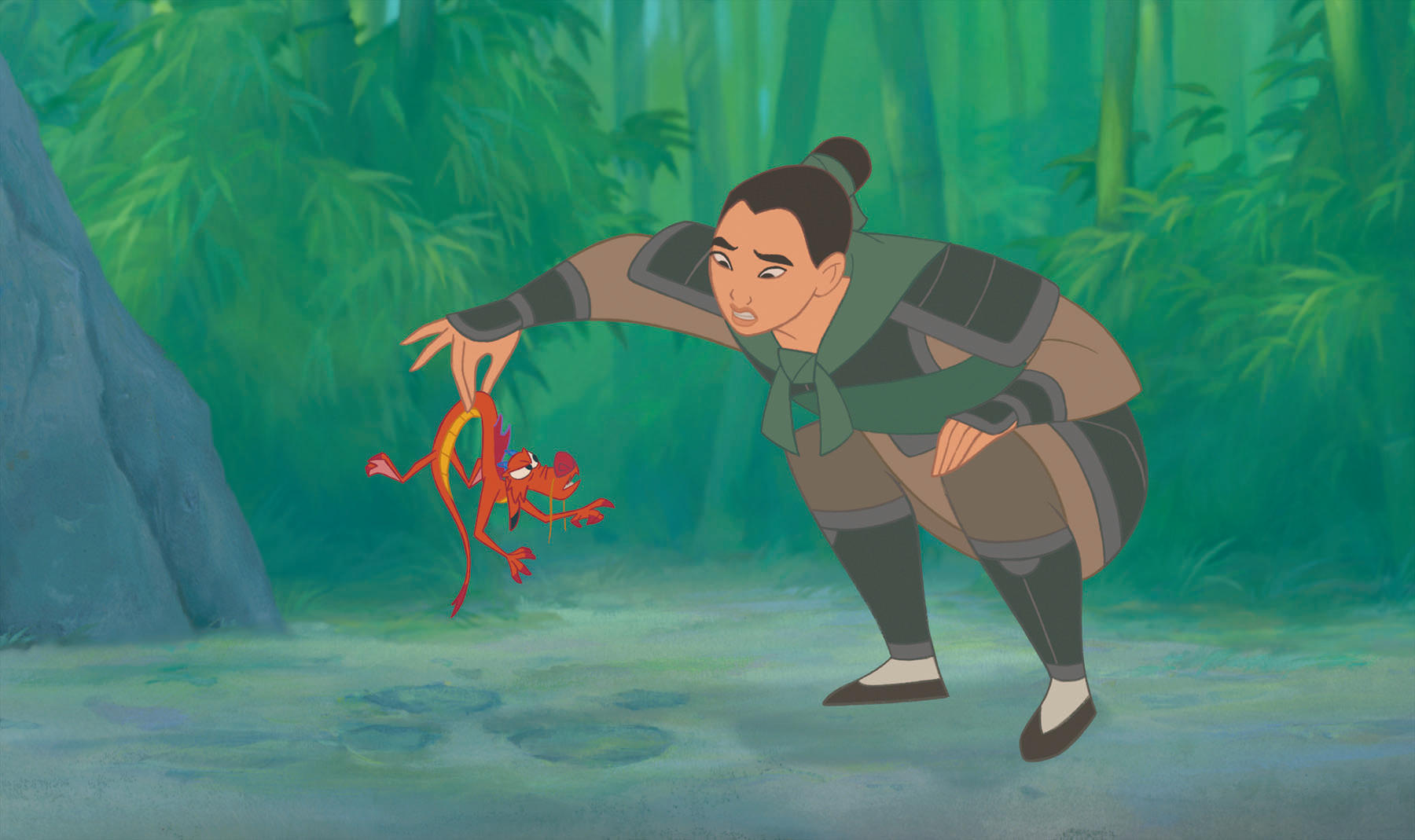 An animated musical adventure directed by Tony Bancroft and Barry Cook, ‘Mulan’ is an iconic movie by Disney based on Chinese legends and culture. The critically acclaimed movie won several Annie Awards and was also followed by a sequel and a live-action adaptation. With Ming-Na Wen, Eddie Murphy, Miguel Ferrer, and BD Wong in the voice cast, Mulan tells the tale of the titular character — a girl who is underestimated by her family and society due to her gender. But when the country falls under the attack of the Huns, Mulan disguises herself as a man and fights in the Imperial army, saving the country as well as the Emperor’s life.

She is guided by the witty dragon Mushu, who is the family guardian sent by her ancestors. ‘Encanto’ and ‘Mulan’ are highly similar as both Mirabel and Mulan are not taken seriously by their families, till the time they exhibit their courage to save their close ones from danger. They also draw strength from the blessings of their ancestors, which include a touch of magic. Another similarity is the soulful original soundtrack, and also the vivid depictions of ethnicity.

With dynamic actors such as Auliʻi Cravalho, Dwayne Johnson, Rachel House, and Temuera Morrison among several others as its voice cast, ‘Moana‘ is a thrilling musical adventure movie directed by Ron Clements, John Musker, Don Hall, and Chris Williams. The story revolves around Moana, the brave daughter of a Polynesian village chief, who sets out to return a pounamu stone that contains the heart of the goddess Te Fiti to her after she is chosen by the ocean itself for the task.

The stone had been stolen by the demigod Maui, and Moana must first find him to retrieve it. Maui eventually has a change of heart and decides to help Moana to defeat Te Kā, the angered version of goddess Te Fiti. Both ‘Encanto’ and ‘Moana’ feature strong-willed female leads, who surpass all odds to make things right and prove their abilities to their loved ones. The songs shape up the narratives of both the movies and the depictions of different cultures makes them unique.

‘Frozen‘ is a double Academy Award-winning musical fantasy movie directed by Chris Buck and Jennifer Lee that tells the magical tale of two sisters, Anna and Elsa. Elsa has the power to control and create ice and snow, but after accidentally injuring her younger sister Elsa, she breaks off all ties from her. When her magic unintentionally engulfs the kingdom in an eternal winter, Elsa goes into hiding out of fear. It is now up to Anna to seek her elder sister and mend their ties to restore the kingdom’s prosperity. Anna is accompanied on her adventure by the talking snowman Olaf, as well as the iceman Kristoff and his reindeer Sven.

Much like ‘Encanto,’ Frozen emphasizes the equation of two sisters and how they can bring out the best in each other if they resolve their differences. In ‘Encanto,’ Isabela’s powers get strengthened when she and Mirabel make up with each other, and the same is the case with Anna and Elsa in ‘Frozen.’ Also, both Anna and Mirabel have to let go of their inhibitions to fulfill their missions of saving their loved ones. Another similarity is the acclaimed soundtrack of both the movies, which adds depth to the stories. 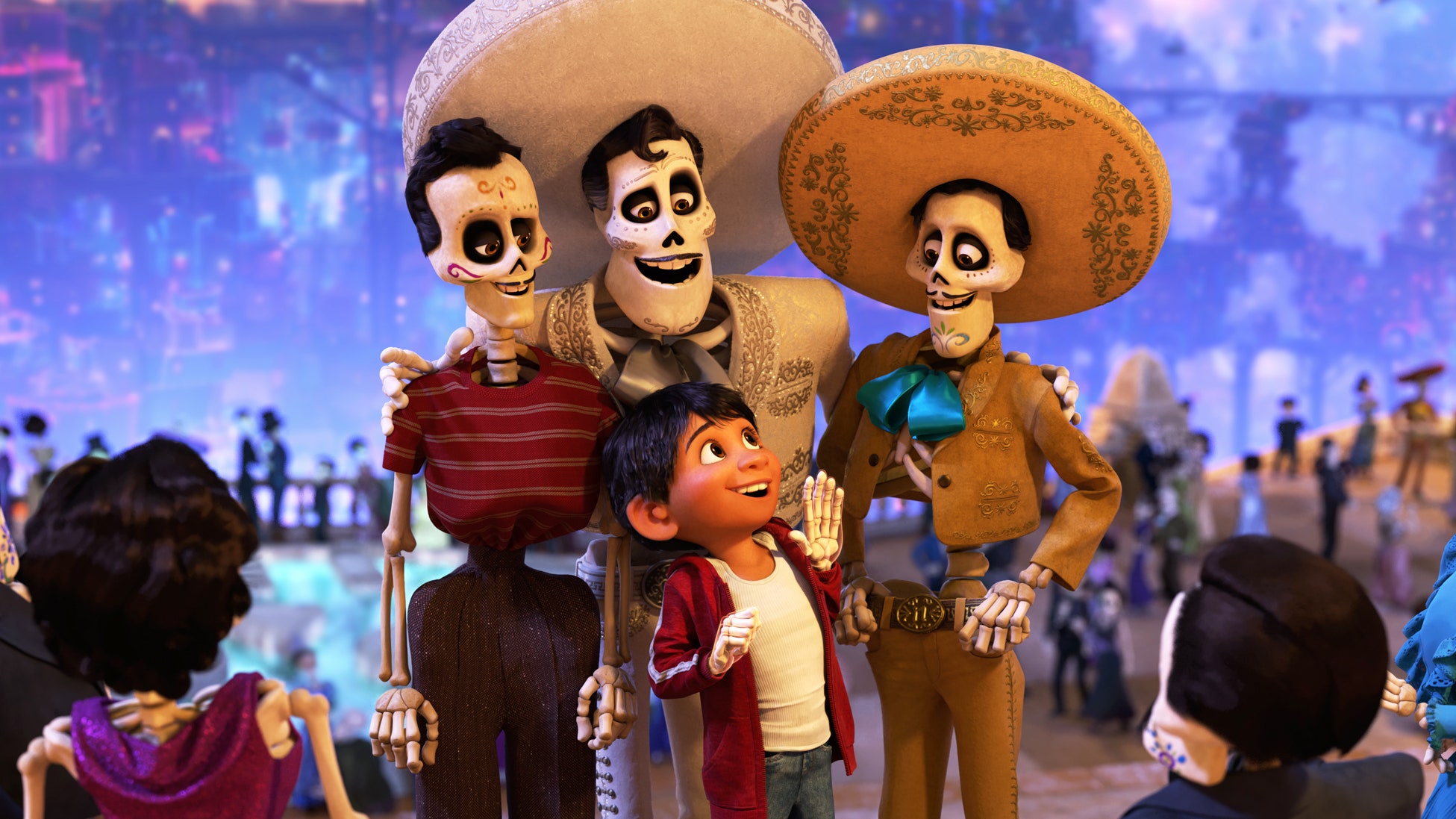 Directed by Lee Unkrich and Adrian Molina, ‘Coco‘ is a musical fantasy that just like ‘Encanto,’ revolves highly on the concepts of family and ancestry. Miguel is a young boy, who accidentally gets transported to the Land of the Dead, where he tries to seek his deceased great grandfather Ernesto to help reverse a curse on their family that bans them from music. Ernesto was a musician who had abandoned his wife Imelda, thus causing her to place a ban on music for the family. Miguel and Ernesto now must look for Imelda in the Land of the Dead, and convince her to lift the ban, so that Miguel can return to the living world and make things right for the family.

Another apt representation of culture and ethnic family dynamics like ‘Encanto,’ ‘Coco’ revolves around Miguel who is chided by his family due to his secret love for music, much like Mirabel being ostracized due to her lack of magical powers. They both are the odd sheep in their families, but their deep love for their loved ones gives them the strength to eradicate the troubles that befall their homes, as well as seek the blessings of their magical ancestors. Coco also was highly praised for its original songs and visuals and won two Academy Awards as well, along with acclaim for the voice cast which has names like Anthony Gonzalez, Gael García Bernal, Benjamin Bratt, and Alanna Ubach among others.