10 Anime You Must Watch if You Love Cannon Busters 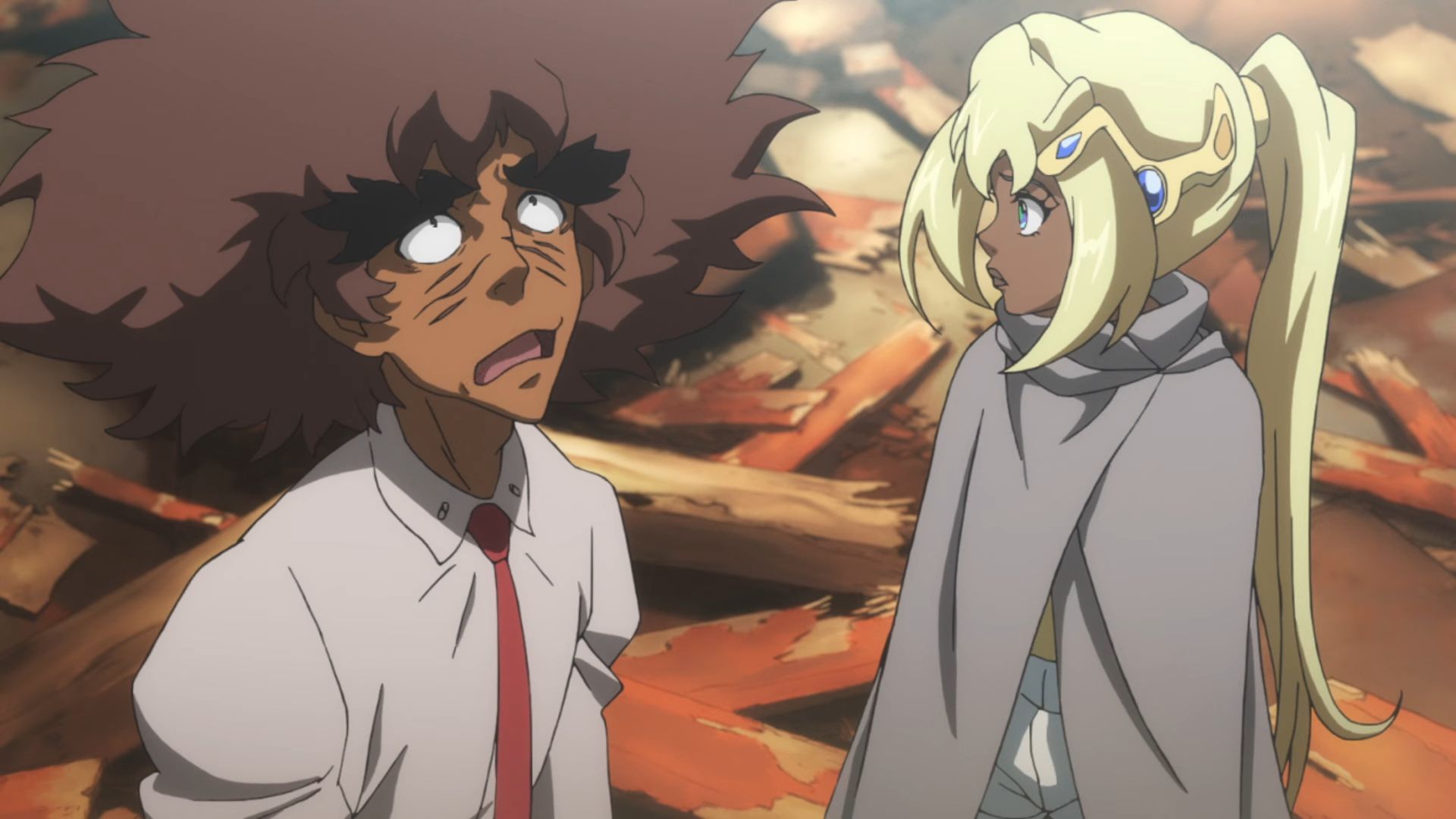 ‘Cannon Busters‘ is not at all a plot-heavy anime and it clearly does not even try to be one. What really makes it appealing to most people is its style. It has this old school 90s feel to it which will remind you of some timeless classic shows like ‘Trigun‘ and ‘Cowboy Bebop‘. But every time there’s an action scene, everything kicks up to a whole new level with unbelievable CGI and insanely surreal mecha fight scenes.

What makes the fight scenes even more intense and engaging is how even the main characters end up taking a whole lot of beating before reaching the next part of the story. Every threat or enemy that crosses their way gives them a hard time and proves to be a major obstacle in their journey. The action scenes are so well-paced and entertaining that you don’t feel the need to have a story building up around them. And with characters that are immediately likable and funny with their goofy personalities, I don’t think there’s anything more you can ask for from an action sci-fi anime.

‘Cannon Busters’ is yet another promising show in Netflix’s growing anime catalog and many fans are already considering it to be a classic. Classic or not, I’m pretty sure that this show will return with a whole new season very soon. But till then, just to fill in your time, you might want to check out other similar anime. So, here’s the list of best anime similar to ‘Cannon Busters’ that are our recommendations. You can watch several of these anime like ‘Cannon Busters’ on Netflix, Crunchyroll or Hulu. 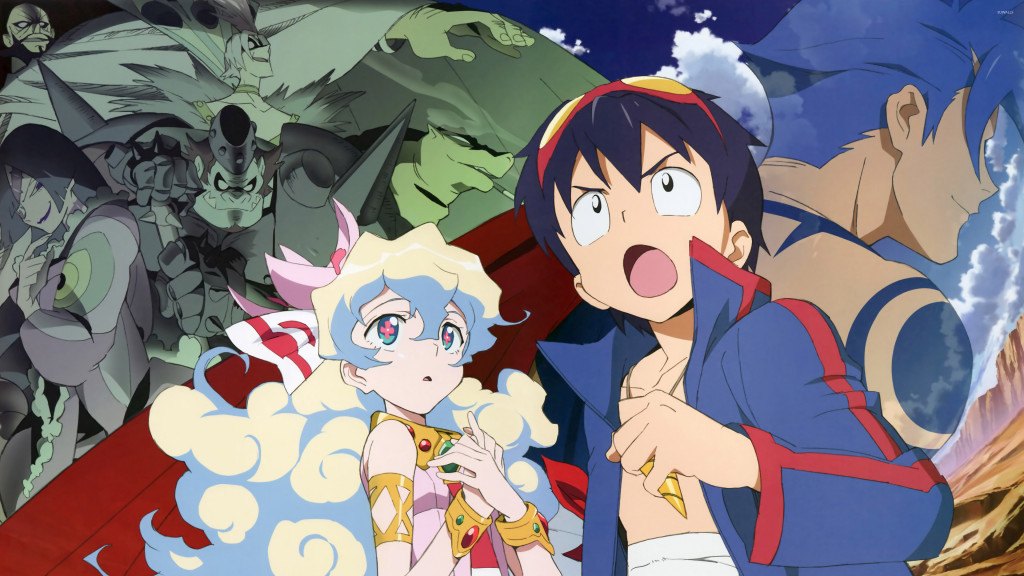 ‘Gurren Lagann‘ is about a post-apocalyptic world where human civilizations live deep underground to hide from the danger that lurks on the surface. Kamina, a free-spirited rebel, decides to break loose and explore the surface. He even asks his brother Simon to join him on this adventure and on the surface, they meet a girl named Yoko who has already been up there fighting “Beastmen” for quite some time. Determined to regain control over their lost planet, the three wage a war against the humanoid creatures that have terrorized human civilizations for ages now. Facing all of their challenges head on, the three set out to unravel the intergalactic mystery that surrounds these creatures. 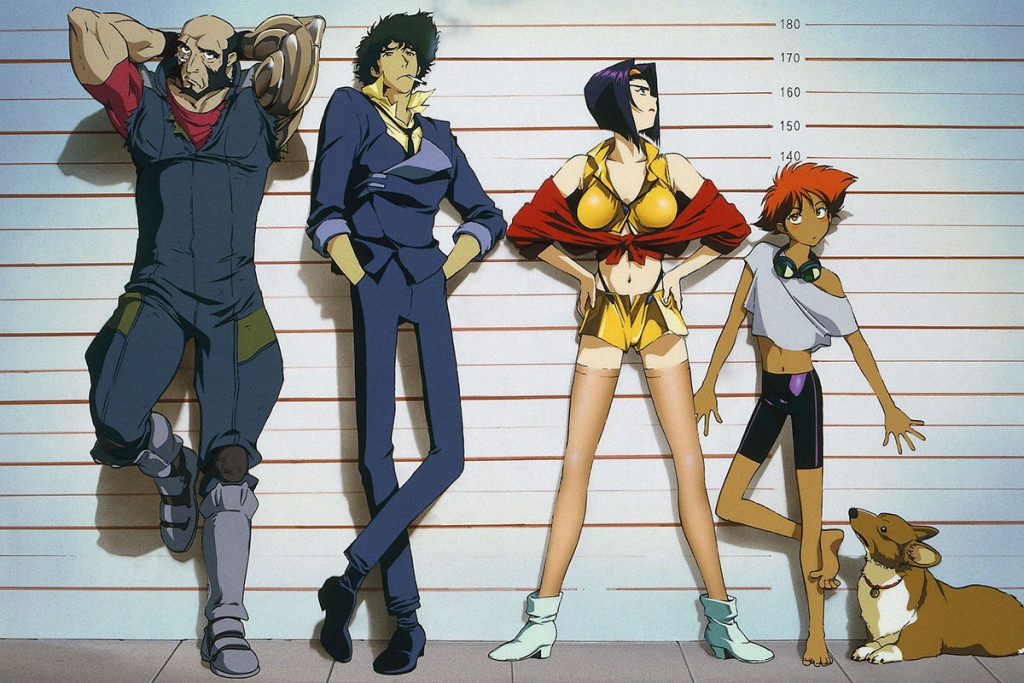 Set in the year 2071, ‘Cowboy Bebop‘ takes an episodic approach towards the adventures of a laid back Space Cowboy named Spike Spiegel and his partner Jet Black, who earn a living by capturing space bounties and collecting all the rewards around them. Soon, they are also joined by a femme fatale named Faye Valentine who has some pretty good conning skills, a strange Welsh corgi that is far more intelligent than any of them, and a computer geek named Edward Wong. Little by little, with each unique episodic story of the anime, we get to know more about the dark pasts of the characters and even the overarching plot that focuses on their journey. With some upbeat jazz music booming in the backgrounds, this fast paced classic is still considered to be the best gateway anime of all time. 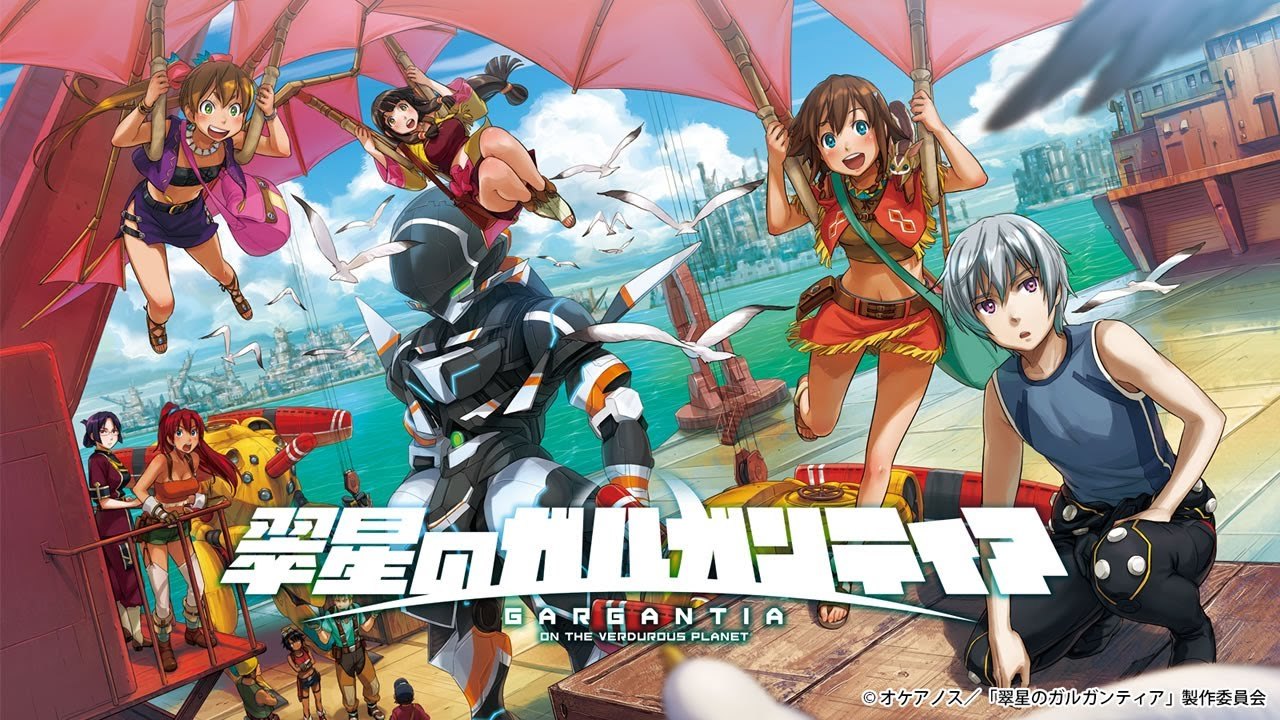 ‘Gargantia on the Verdurous Planet‘, just like ‘Cannon Busters’, fuses action, sci-fi and mecha into one package. Based on the characters created by the same mangaka who is known for his other works such as ‘Madoka‘ and ‘Psycho-Pass‘, ‘Gargantia’ brings a futuristic world where a mecha pilot finds himself in space-time warp amid an intergalactic war. He later wakes up from a long hibernation and finds himself in a strange unknown atmosphere where humans speak a very different language and have naturally breathable air. 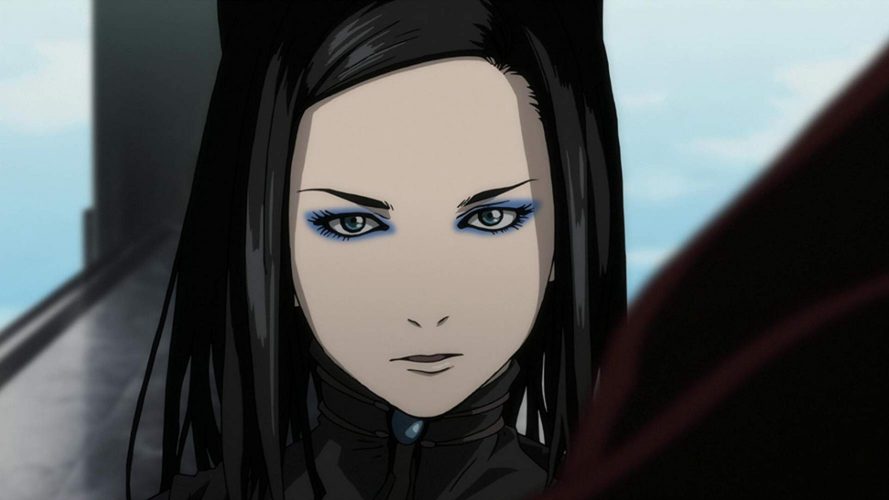 Compared to ‘Cannon Busters’, ‘Ergo Proxy‘ has a much darker tone but it establishes its similarities when it comes to presenting a futuristic world where humans and robots coexist. Set in a dystopian world where humans are forced to live under dome cities after a disaster, the anime revolves around Re-L Mayer who works at the Intelligence Bureau. Along with her AutoReivs Iggy, she is expected to solve a mysterious case that involves two other AutoReivs that have gone crazy after being affected by a weird virus. They must now find the origins of the Cogito virus before it spreads everywhere and ends up destroying everything.

Later, Re-L herself is attacked by a creature called proxy and that’s when it starts to hit her that all of these events seem to somehow lead her back to a strange man named Vincent Law. The two of them are then forced to step out of their dome in order to find Vincent’s true identity and the more they get to know who he truly is, the closer they get to understanding why Proxies are trying to ruin their societies. 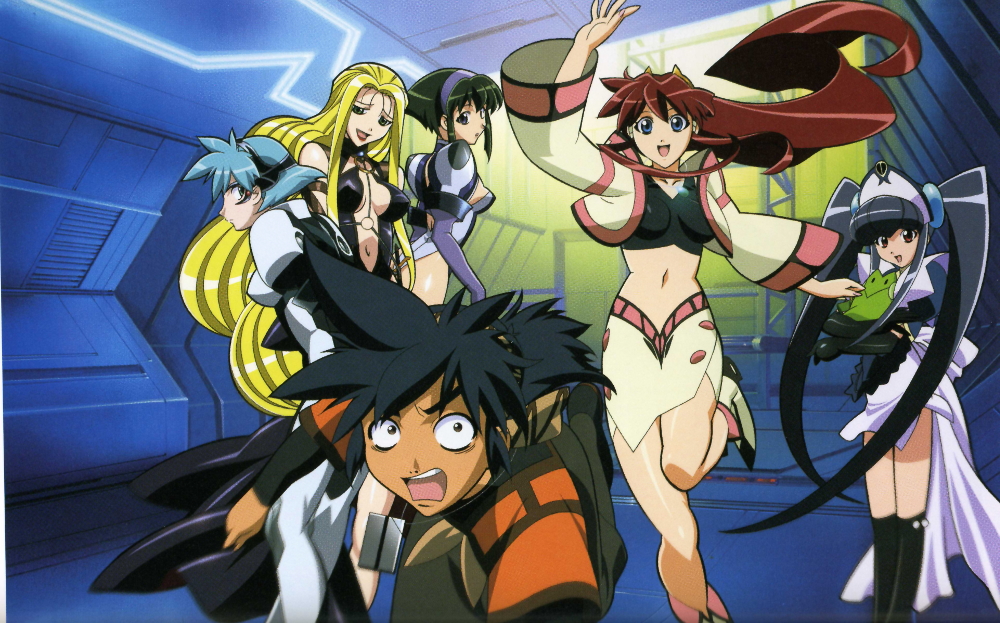 Created in the early 2000s, ‘Vandread’ also involves quite a lot of Mecha. Along with that, it also has comedy, over-the-top action and some fan service. However, the similarities between the two anime also go deeper since ‘Vandread’ also adapts a coming-of-age approach to explore the adventures of a young boy who’s trying to find his purpose in life. With a colorful cast and never-seen-before mecha transformations, ‘Vandread’ is one show that will be enjoyable for anyone who had a good time watching ‘Cannon Busters’.

Apart from the obvious action, humor and science fiction, ‘Trigun‘ has a whole lot of gunfights featuring an iconic cowboy named Vash The Stampede. Very similar to ‘Cannon Busters’, despite being set in the future, ‘Trigun’ has more of a wasteland setup. One look at the main character Vash and you can tell that he is a truly badass gunslinging hero.

But this is where the story gets funny because as much of a bad boy Vash might seem to be on the outside, he is actually very kind and even follows a no-kill rule. His dangerous lifestyle that always attracts gruesome gunfights is contradicted by his morale. The show’s art style might seem a bit too dated now but considering that it came out in the 90s, the quality is not bad at all. You’ll also be able to notice a lot of similarities in the art style of ‘Trigun’ and ‘Cannon Busters’ as both of them have that vintage anime feel.

‘Code Geass’ is one of the most popular and highest-rated anime shows on this list. While this one has less of Mecha and more of supernatural compared to ‘Cannon Busters’, the two share their similarities when it comes to their protagonists. ‘Code Geass‘ is often referred to as ‘Death Note‘ with Mecha elements and though I do not entirely agree with that description, I can see where it comes from. This show’s main appeal is its uncanny ability to mix many genres at once and still get away with it.

Throughout the anime’s runtime, you get to experience everything from shounen rivalries to shoujo relationships to some classic mecha. The entire story has been paced perfectly and overall, the execution of the plot is flawless. Despite having a not so unique storyline, ‘Code Geass‘ checks all the right boxes that make it a perfect well rounded anime. If you’re still new to the whole Mecha sci-fi genre and you’re looking for some quality gateway shows, this is where you should begin. 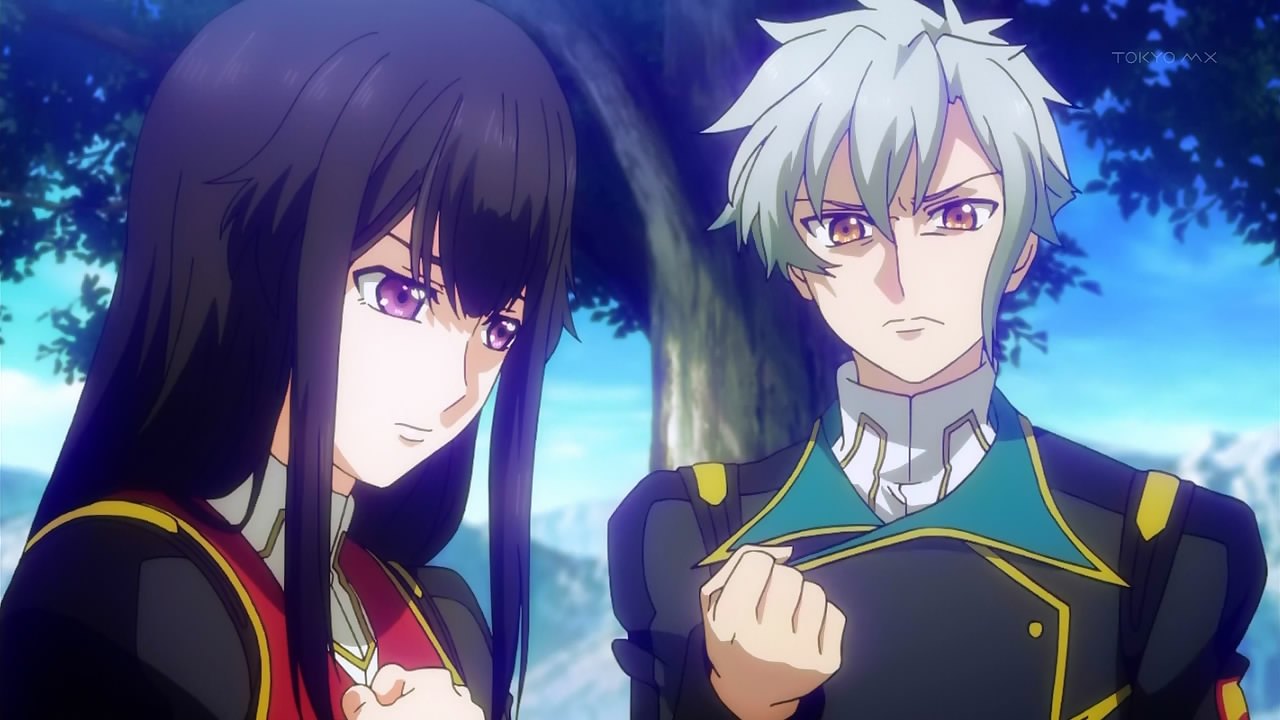 ‘Buddy Complex’ is again a mecha shounen sci-fi anime that is packed with a whole lot of action. While this one adopts more of a serious tone, it does share a lot of similarities with ‘Cannon Busters’ when it comes to its primary characters. It centers around a high school kid named Aoba Watase who lives a pretty ordinary life. But his world is turns upside down when one day, while he walks back from school, a robot falls from the sky and starts chasing him. This is when one of his classmates, Hina Yumihara, comes to his rescue in a giant robot that she controls. She then sends him 70 years into the future for an adventure of a lifetime. Almost all the other shows in the list are a combination of sci-fi, mecha and a few other genres. Along with all of these genres, ‘Buddy Complex’ also brings in its own elements of Isekai and time-travel, making it a unique show that you shouldn’t miss out on. 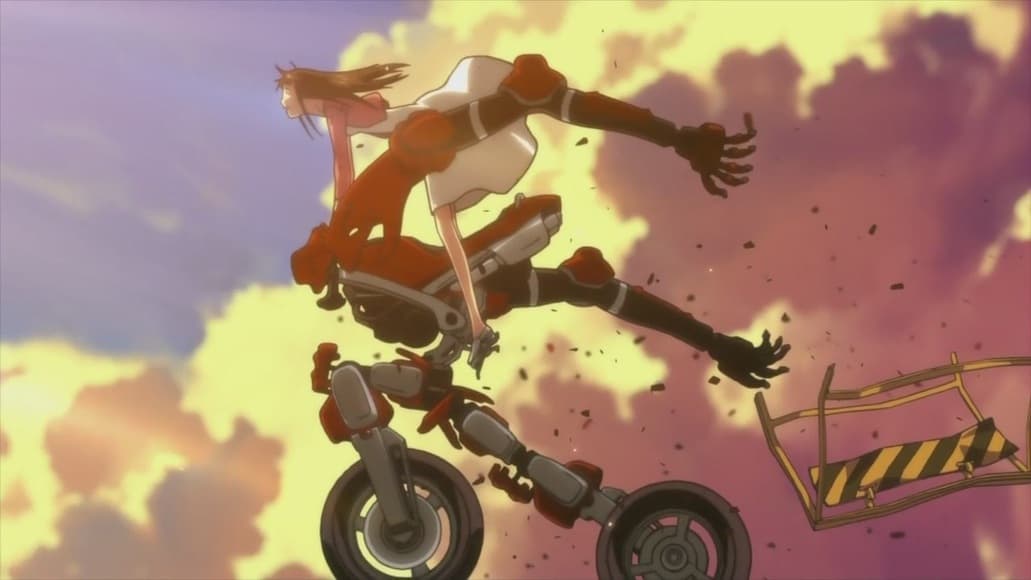 ‘Ride Back’ is more of a racing mecha sci-fi that revolves around a young girl named Run Ogata who was once a promising ballet dancer. After being forced to quit her passion, she is introduced to a whole new world of racing that involves riding a “Rideback”. Using her prior athleticism and her natural riding skills, she instantly starts to excel at the sport. But soon, she gets involved in a world where these vehicles are not just used for racing but also for pursuing nefarious agendas. Finally finding a new purpose in life, she sets out to discover a whole new life that directs her towards something that is much bigger than herself. 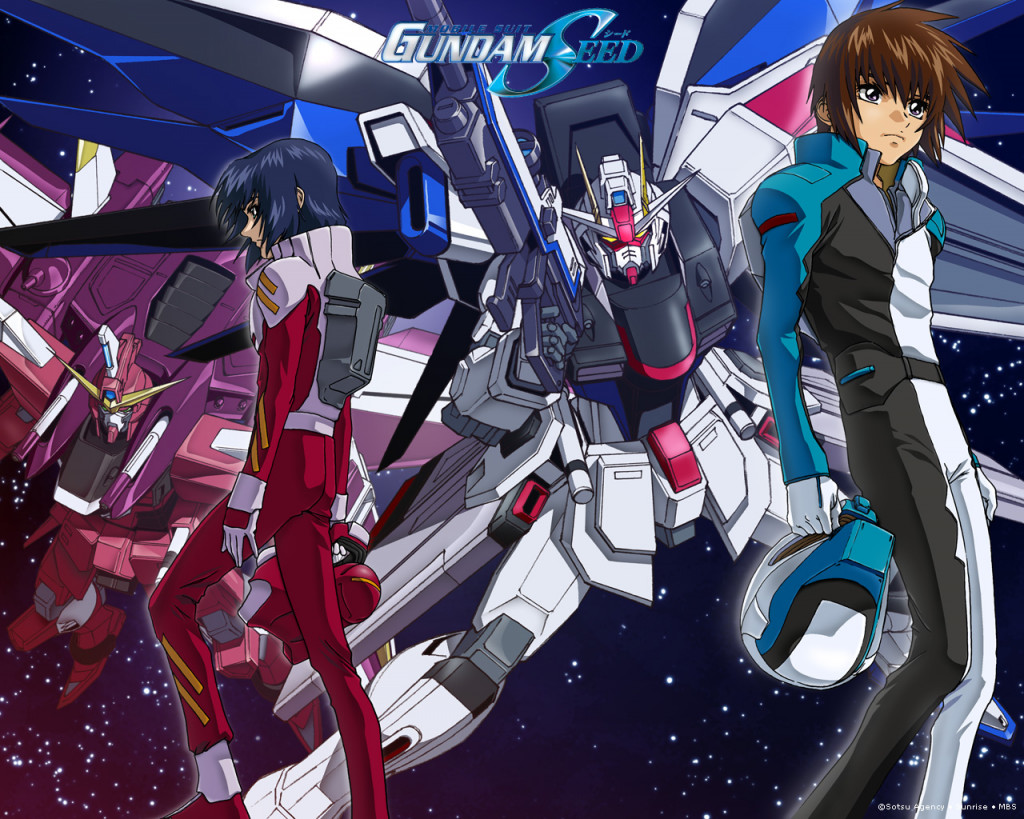 The ‘Gundam’ series has been around since ages now but its recent installment has taken the world of mecha by storm. Its overarching plot mainly focuses on a war between Earth and other outer-space colonies but along with that, it also brings insightful concepts such as imperialism, poverty and even the impact of war on child soldiers. At the heart of it, ‘Mobile Suit Gundam: Iron-Blooded Orphans’ is a mecha sci-fi like all the other shows on this list. But if you’re looking for something deeper that goes beyond mere entertaining action scenes and has a fine world-building storyline, this Sunrise creation should be on top of your watchlist.