8 TV Shows You Must Watch if You Love Baskets 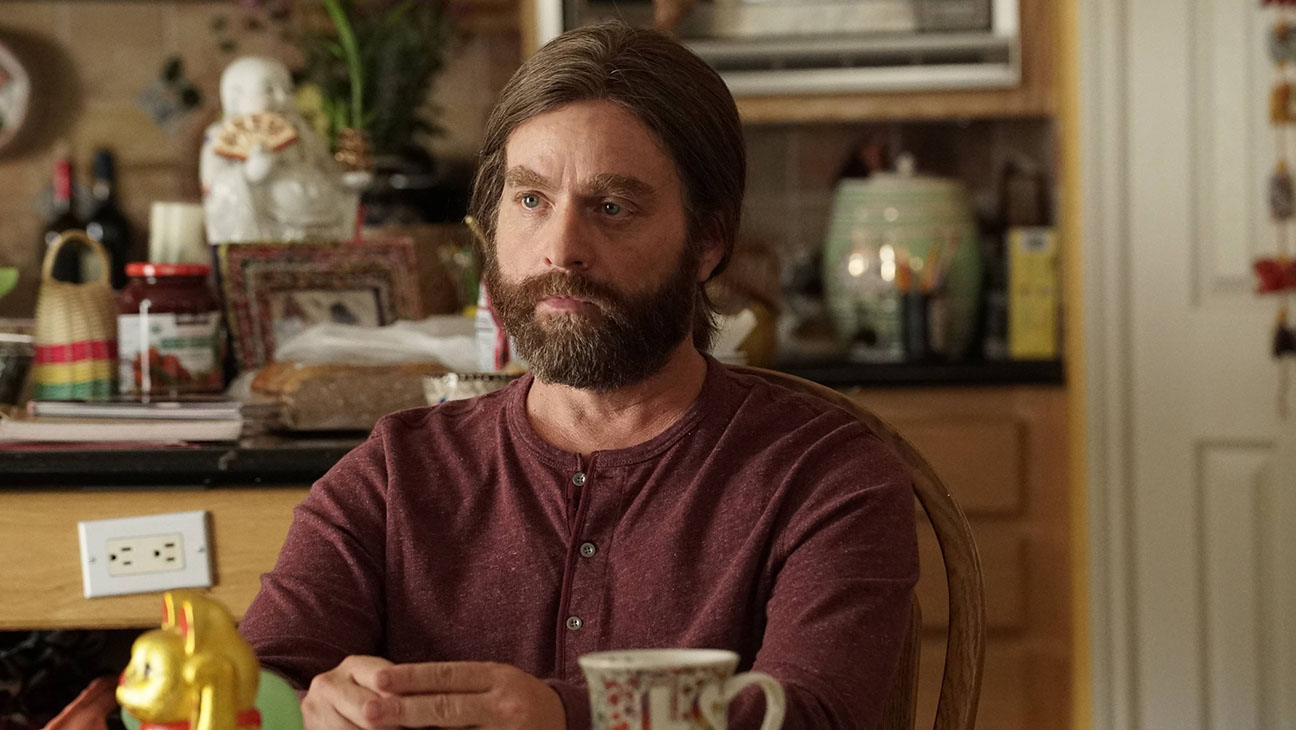 The comedy-drama series ‘Baskets’ is created by some of the biggest names in the world of comedy — Louis C.K., Zach Galifianakis and Jonathan Krisel. Galifianakis plays two characters in the series — the leading character Chip Baskets, and his twin brother Dale Baskets. Chip has always wanted to be a professional clown. But he could never manage to get into a school in Paris where all the professional aspects of clowning are taught. Thus, having no chance of making it big as a clown in life, Chip decides that joining a rodeo as a clown is as far as his career will get. He joins the rodeo as he is madly in love with his profession.

The tragicomic situations Chip finds himself in during his career form the crux of the series. The writing and acting in ‘Baskets’ managed to draw immense critical acclaim. If you enjoyed watching this show and are looking for more titles that explore similar ideas and themes, then we’ve got you covered. Here’s the list of best shows similar to ‘Baskets’ that are our recommendations. You can watch several of these series like ‘Baskets’ on Netflix, Hulu or Amazon Prime. 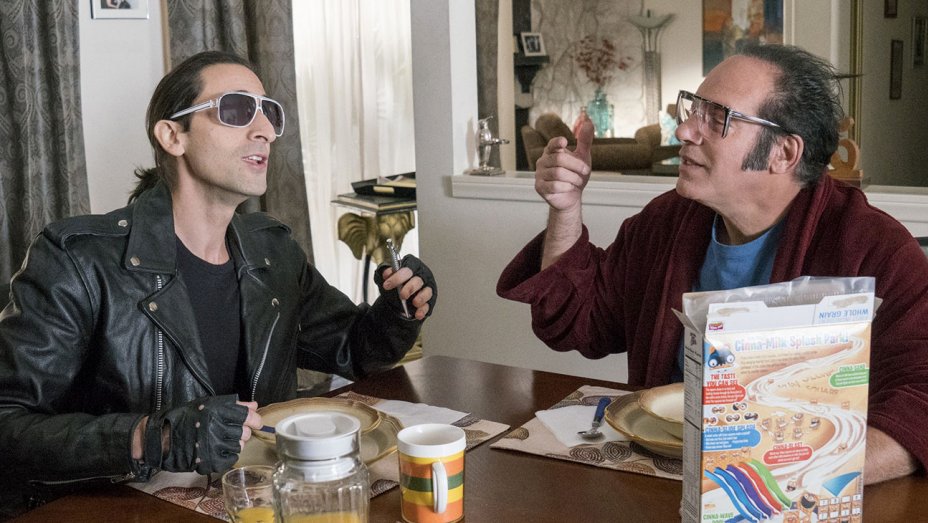 Famous American stand-up comedian Andrew Dice Clay plays himself in this Showtime original series. The story of ‘Dice’ is a fine blend of reality and fiction. In this series, we come to know how Dice lost everything in his life, and how even after the massive tragedy, he still does not lose hope and plans to resurrect his career in any way possible. Dice does not complain about what has gone by. Instead, he begins to pay off all the loans he had accrued while gambling, and even starts managing his son’s heavy metal band. Despite trying to blur the line between reality and fiction, the series did not manage to impress the critics. Showtime canceled ‘Dice’ after a couple of seasons. 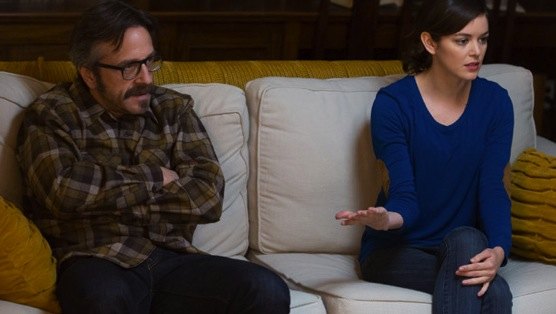 Marc Maron is the creator and lead actor of this comedy series. The character Maron plays here is a version of himself. In real life, Maron is a famous comedian and podcast show host who has interviewed some of the biggest legends in the world of comedy like Conan O’Brien, Louis CK, Robin Williams, and others. Even in this series, Maron is a podcast host, but here we get to enter his personal life. We find that this Maron is having quite a lot of trouble in trying to maintain his relationships outside of his work. The relationships he shares with his father, his best friend and his girlfriend form the crux of the series. The show was subject to critical acclaim throughout its run. 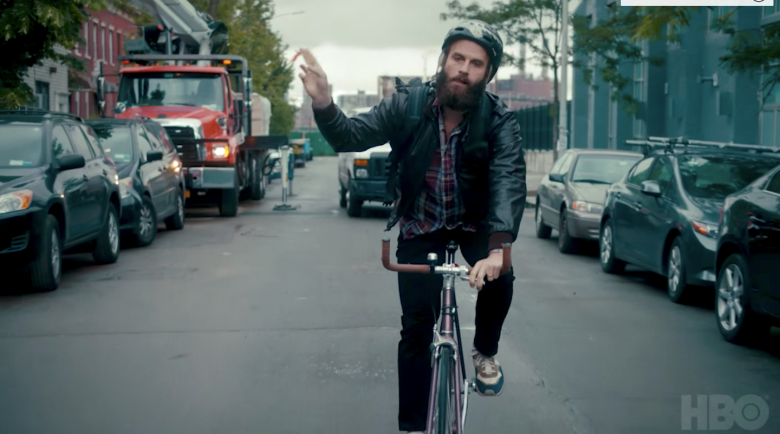 ‘High Maintenance‘ is a unique comedy-drama created by the husband-wife duo of Ben Sinclair and Katja Blichfeld. While in ‘Baskets’ we see that the leading character is unhappy with his professional life, in ‘High Maintenance’ we find the protagonist’s professional life in full bloom. Sinclair plays the protagonist of the series. He is a weed dealer simply known as The Guy. The show follows The Guy as he goes around on a bicycle to different neighborhoods in Manhattan and Brooklyn where he has some regular customers who buy weed from him. The story of each episode is based on a certain group of The Guy’s customers. ‘High Maintenance’ started airing as a web series on Vimeo before being made into a television show by HBO. The show received positive critical acclaim for its fascinating concept and the fact that the writers managed to create interesting and complex characters in all of the episodes. 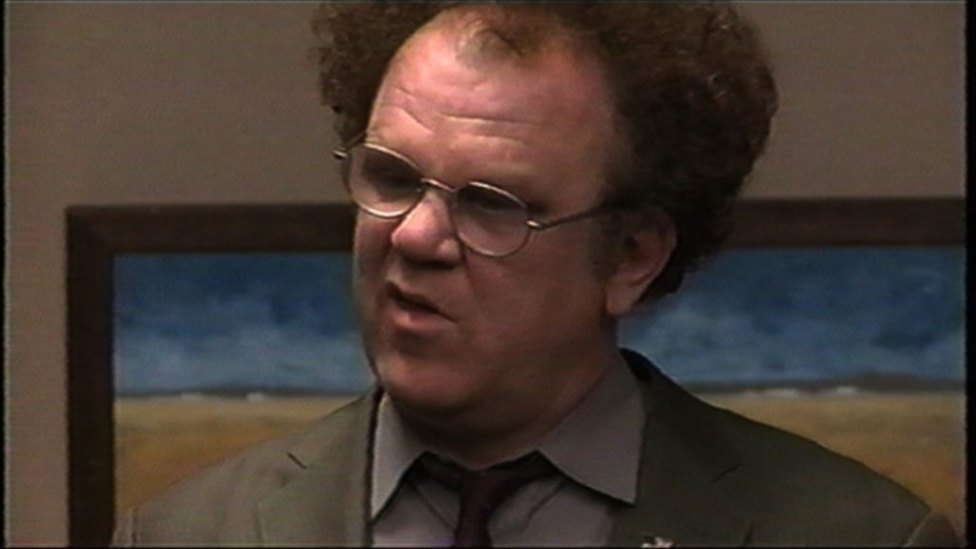 The format of ‘Check It Out!, with Dr. Steve Brule’ is radically different from ‘Baskets’. But this series deserves a mention on the list because both shows deal with the poor professional and personal lives of their leading characters. The central character of ‘Check It Out!, with Dr. Steve Brule’ is Dr. Brule himself (played by John C. Reilly). He is the host of a TV show where he discusses the many aspects of living. However, Dr. Brule is naive about some of the most common truths in the world and is also quite socially awkward. This makes his series quite bizarre. Every episode starts with a poem, but Dr. Brule never manages to pronounce the poet’s name correctly.

During the course of the show, Brule often ends up revealing some personal facts which are truly shocking. On one instance, he reveals how his mother wanted to poison him as a child. Because this is a show within a show, there are fictional commercial breaks where characters come on the TV and review a movie, talk about the weather, or provide news updates. ‘Check It Out!, with Dr. Steve Brule’ is essentially a parody of the public access television shows that became a huge sensation during the 1990s. The series received critical acclaim, with Reilly receiving special mention for his performance. 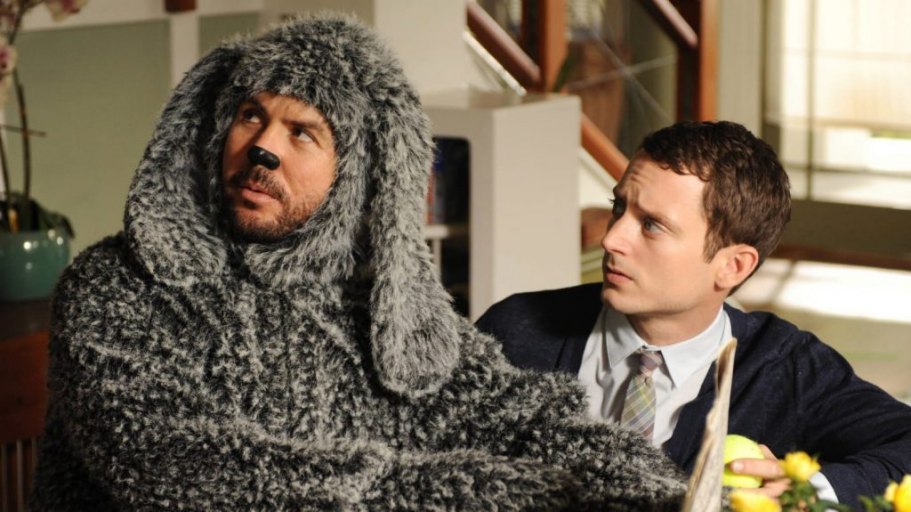 This surreal comedy series stars Elijah Wood in the lead role. Wood’s character is called Ryan. He is having a tough time trying to establish himself in society. One day, he comes in contact with the pet dog of his neighbors named Wilfred. While the rest of the world sees this canine as any other normal dog, Ryan sees him as a grown man in a dog suit. The two of them develop a great friendship and it is Wilfred who motivates Ryan in becoming more worldly wise. He helps Ryan to get used to the rough world outside of his domestic space and deal with his professional problems head-on. Just like ‘Basket’ is about a man still carrying on with his job despite not achieving his dreams, ‘Wilfred’ too is a series that pushes one to move forward despite the hardships on the way. The show received mostly positive reviews from various publications all over the world. 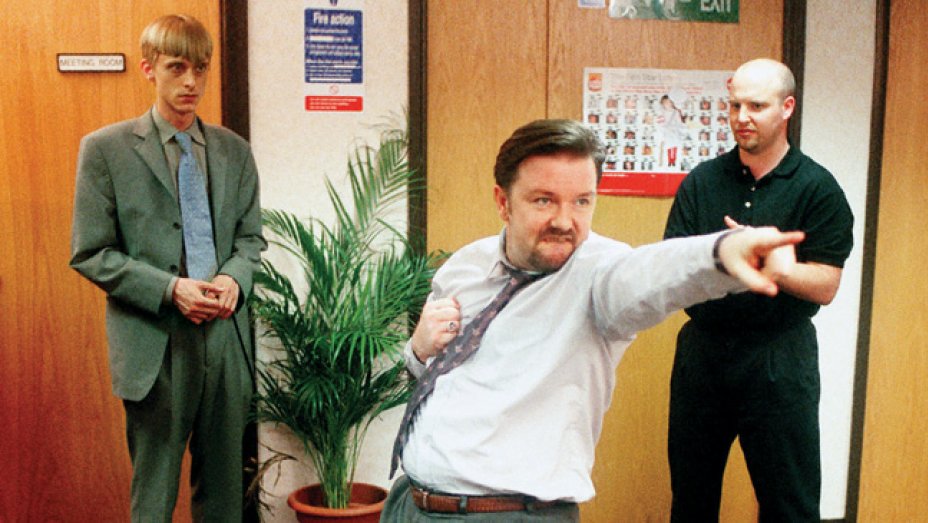 ‘The Office‘ is widely regarded as one of the greatest TV shows of all time. A brainchild of the great comedian Ricky Gervais, this is the first show which made the office space sitcom a hugely popular sub-genre in the world of TV shows. The futility of modern life which is clogged by rules, regulations, and monotony is harshly criticized in this series. Gervais plays the leading character, David Brent. He is the general manager of a branch of Wernham Hogg, a famous paper company. Brent is always trying to get in the good books of the people in his office, and more often than not, ends up making a joke out of himself. He is also not quite aware of what can offend others, and ends up making politically incorrect statements. The series is shot in a mockumentary style, which adds to the effect when Brent gets himself in awkward situations. Few shows have received as widespread appreciation as ‘The Office’. It has been remade in several languages all over the world. 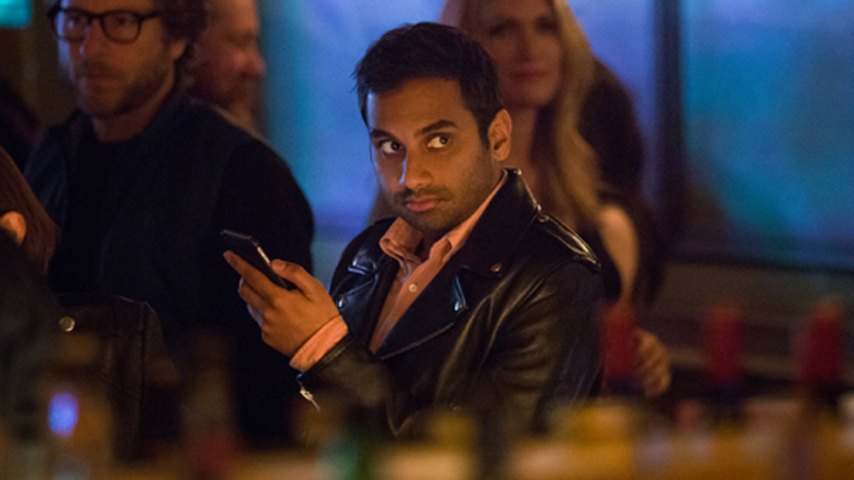 ‘Master Of None’ is a story about an Indian actor, named Dev, in New York City. He is around 30 and has not gotten very far in his career. His most famous work is a television commercial. Dev has few friends who care about him, and they become the other important characters in the series. The show centers on Dev’s life in New York and his relationships with the people he cherishes. Dev is played by the writer and co-creator of the series, Aziz Ansari. Ansari received huge critical appreciation after the series aired on Netflix. ‘Master Of None’ became well-known for its deftly written characters, the powerful cinematography, and the performances put in by the actors. In the way some of the shots are taken, there are clear homages to Federico Fellini, Michaelangelo Antonioni, and other masters of cinema. The series bagged three Emmy Awards and Ansari won a Golden Globe for Best Actor in a Television Series – Musical or Comedy. 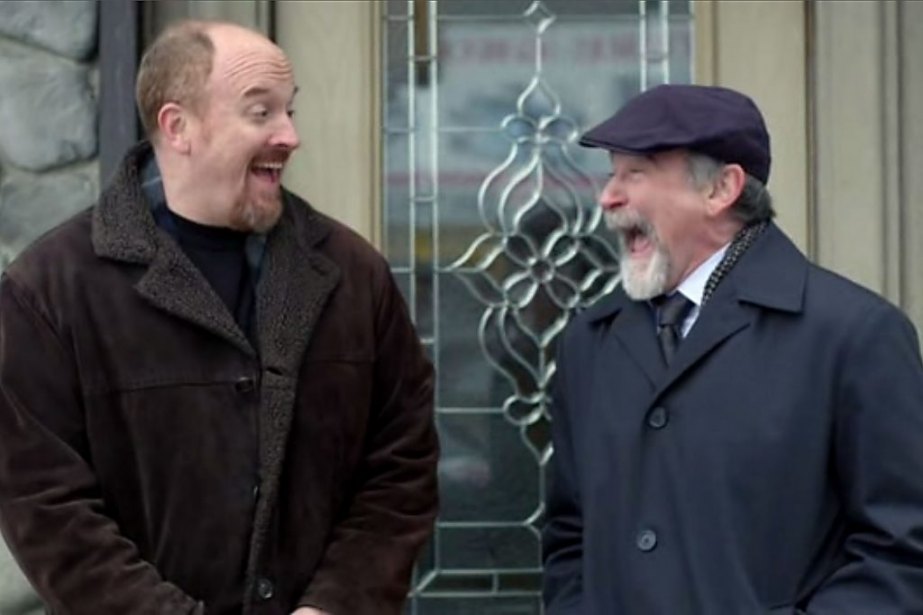 ‘Louie’ is created by the famous comedian Louis C.K. who also plays the leading character in the show. The series is partially based on his life. We find Louie as a comedian who has not made it very big in life. He usually performs in comedy clubs like Manhattan’s Comedy Cellar and Carolines. Louie is also a single parent of two girls. We follow his life as he tries to maintain a balance between his personal and professional spheres. Each episode of the series is an individual story unto itself. However, there are several characters who appear across a number of episodes. The series deals with some very pertinent social issues like depression, sexual orientation and the concept of guilt as preached in Christianity. ‘Louie’ received positive critical acclaim, and its style has been compared to the films of Woody Allen.