12 Best Finance Movies of All Time 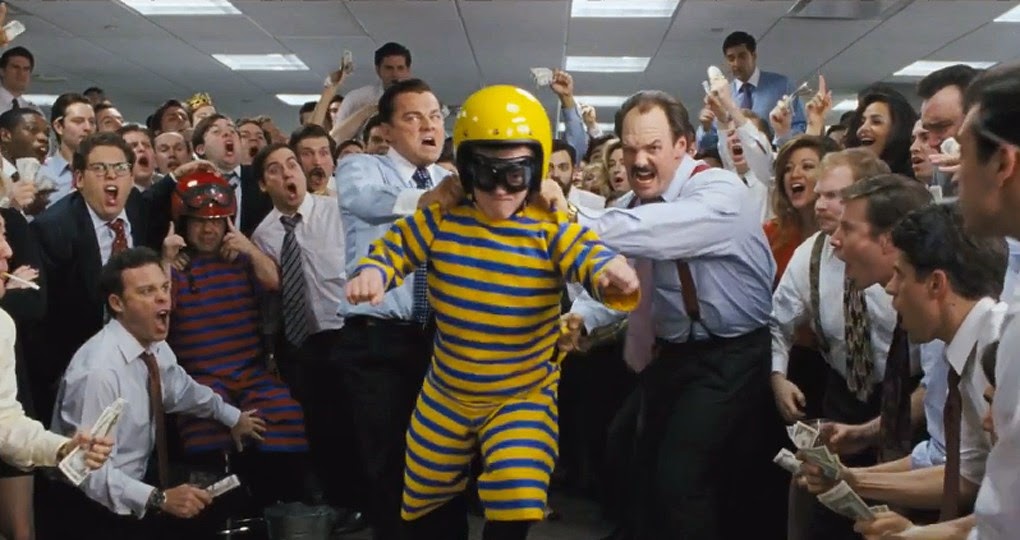 There are very few movies which have been able to capture the essence of money and there are even fewer movies that have projected the world of finance that you could connect to. These movies are the reason that fashion industry saw a jump of more than 200% in sales leather accessories and hand crafted suits. Money speaks and when it does, everyone listens. This list speaks of the movies that have made the cult of Finance sexy, these movies speak of the righteous and greed that haunts the path of money. Scroll down to find the list of top movies about finance ever. You can watch some of these best finance movies on Netflix, Hulu, or Amazon Prime. There are both trade films and stock market movies on the list. 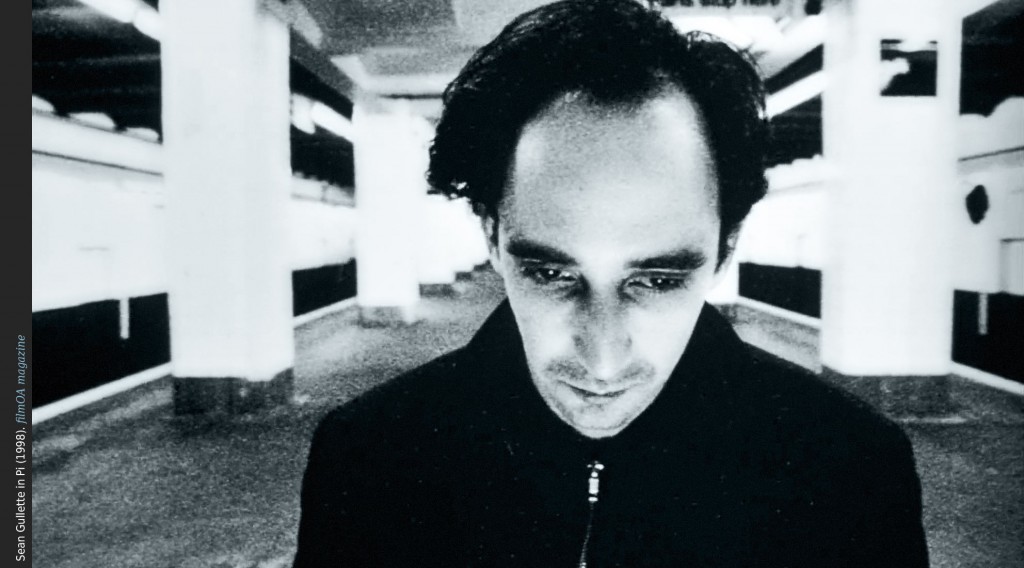 A movie made by the hands of Darren Aronofsky, is bound to create a lot of restlessness. And on top of it  the movie happens to be laden with the magic of numbers. The movie gets you high on the puffs of money. The movie revolves around Max Cohen, who disguises his narration and makes his say. He is a junkie, a stock junkie. The movie brings together the very famous dominance of obsession and paranoia. If you are a fan with the Aronofsky style of scripting and direction, this is a bit of a let down. But what he loses in his madness, he makes up for it with the revelling theories of religion chasing numbers. A conspiracy theory of sorts but still very interesting. Watch the scene where Max is going through the numbers of stock investments under his portfolio and keeps talking to himself. Till the camera captures the entire scene, the audience is made to believe there are people listening to Max in that room until the room reveals itself with just Max and his possessed eyes. 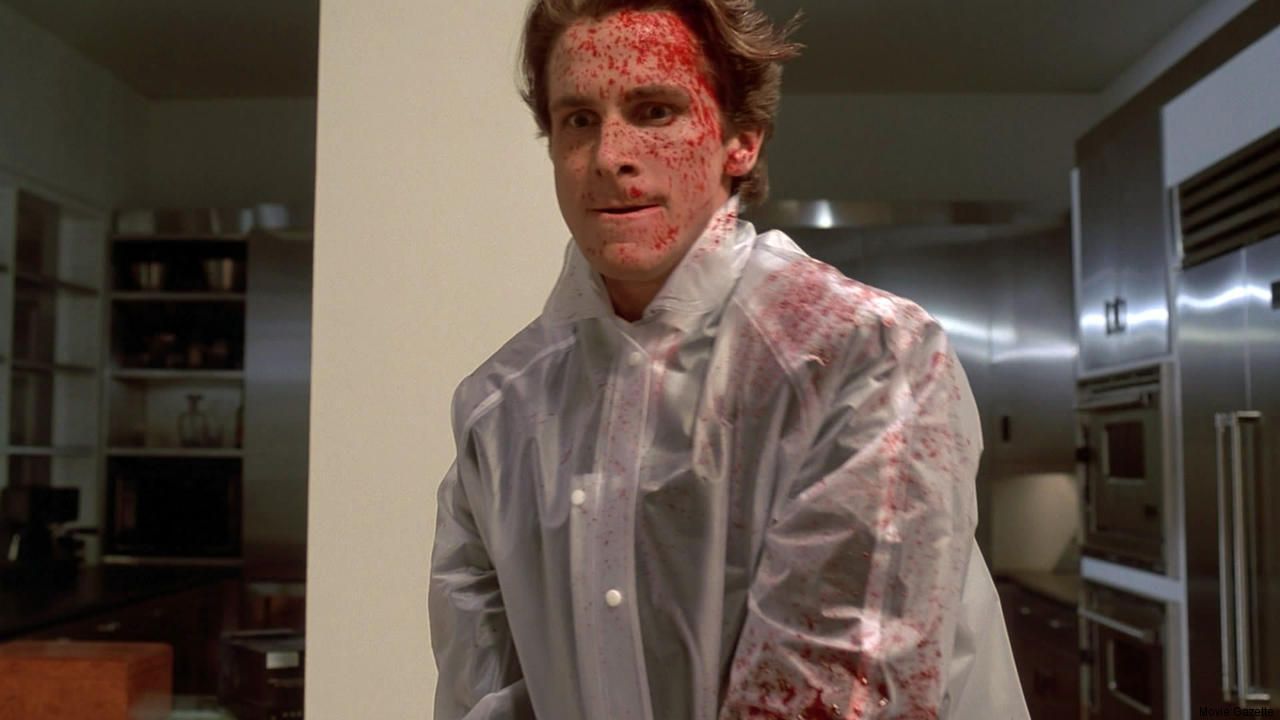 The movie is not about the numbers or the turbulence of financial commodities. Yet it makes an impression for the very eccentric Christian Bale as the investment banker Patrick Bateman. The reason movie stands in this spot is for its scenes unveiling the mundanities of Patrick’s routine. It makes a symphony out of his routine, adding texture and edge to the character. Patrick is a Psycho in every sense but even before he makes that clear, the very calmness of his life makes for uneasiness in the audience’s minds. In his tuxedo and over coat, he creates a persona of an investment banker bundled with his cufflinks. The movie is brutal and dark, yet in the hinges of deaths the audience gets to see the dealing of the finance world and the mere backdrop of the financial slaughter hacks are enough to make the audience drool over the Financial World. 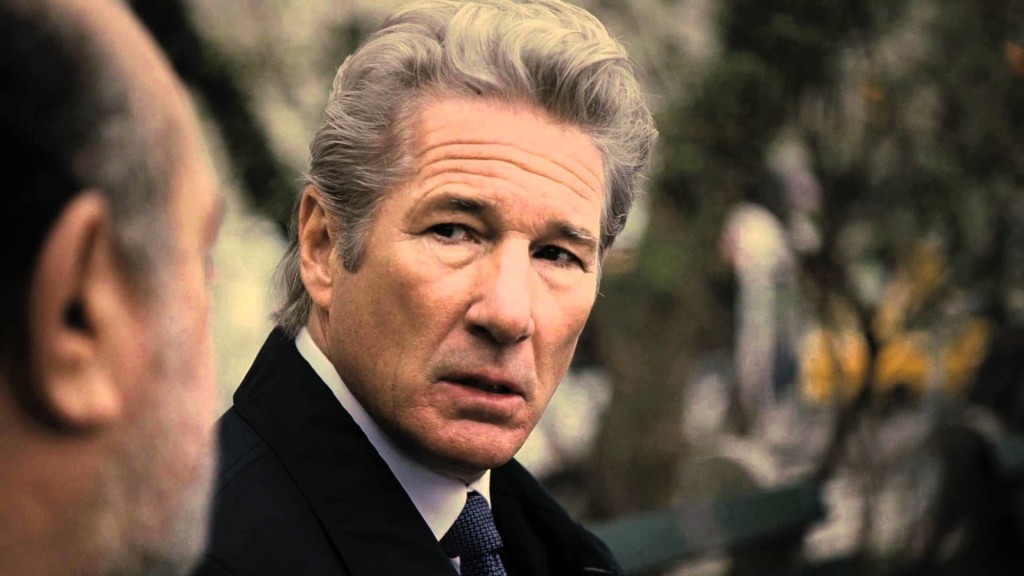 The movie sways by the whirls of Richard Gere as a hedge fund manager. He has everything, a beautiful wife, a daughter and all the riches of the world. But there is always a catch in the smearing of a perfect life. Things go wrong for him the day when he accidentally kills his mistress (Of course, he has a mistress, for he believes a brilliant hedge fund manager always keeps a bit of equity on the sides). Also, he has been meddling with the financial books and things of this behest starts to appear, right after the night of the accident and he gets bogged down in this mess. This movie very distinctly builds the suspense of the movie. The movie has a design flaw though. Richard Gere takes for granted his audience and hence sometimes doesn’t pick on some financial jargons which creates a block for the audience. The movie is more about the chaos of Richard Gere’s life than the financial world but still it takes you into the world of various hedge fund offices and gives you a peek at the barbaric space. 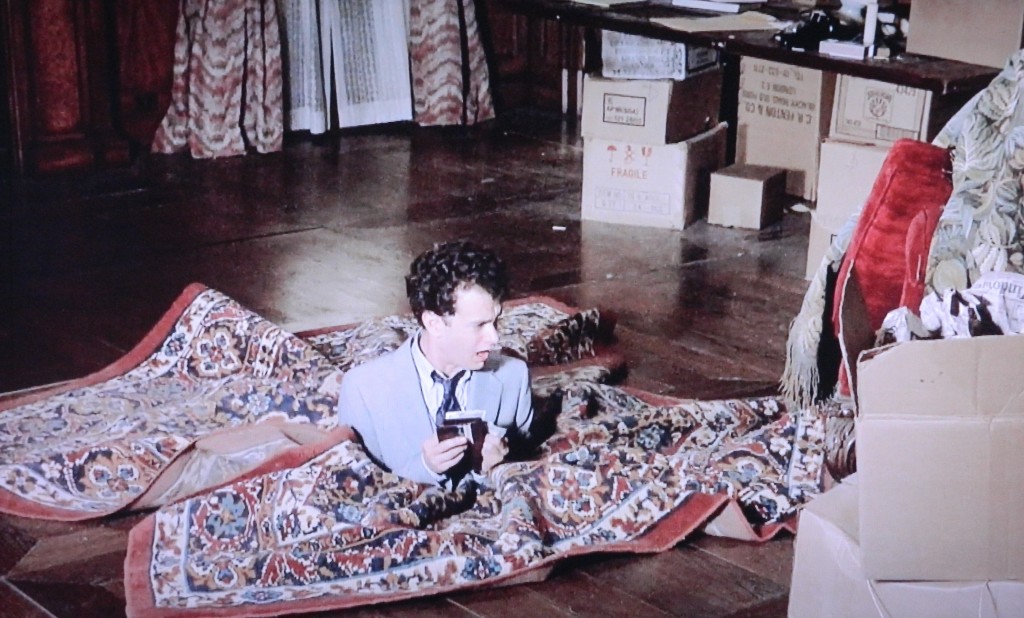 If the movie Glengarry shadowed the antics of the real estate world, The Money Pit makes a hack of the loopholes by the lens of humour. The movie underlines the period of real estate inflation where there was a whole scam of using sub standard materials to make houses to cut costs and survive in the market. A lot of people had to take the brunt of this scam and the couple Walter Fielding aka Tom Hanks and Anna Crowley aka Shelley Long  portray this brunt wittingly. And their act is fitting, fitting to the role enactment. The scene where the damage makes it first appearance in the frame of a Short Circuit, is so well orchestrated that the audience can hardly pull a scratch. In the end of the scene Tom Hanks has a long laugh and is hilarious. The movie ends with a befitting reply to the scrapers in a perfect dolly with a whispering punch of sadness. 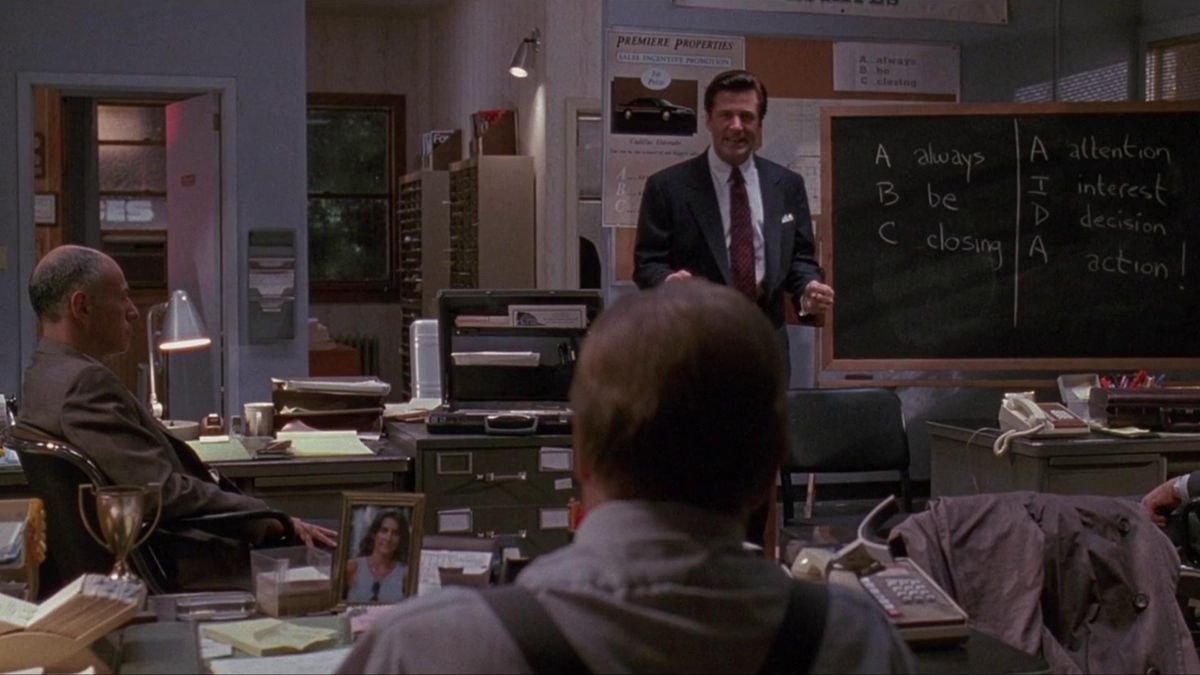 Ever made a sales call? Ever worked at a desk engaging in cold calling for hours? Tried to close a deal? If your answer is Yes to any of these questions then this movie will reflect upon you. It will make you realise the unforgiving and relentless nature of real estate. The movie is based on real estate empire but the misgivings can be tinted in any financial kingdom. Every great movie tends to have a monologue in the name of The Speech. This movie has a couple of them but the most striking is the one delivered by Alec Baldwin where he motivates by the fury of abuses to get the employees focused on closing their leads. It is one of those early movies of Alec Baldwin where he didn’t have the baggage of his persona and hence he always had a command over his scenes. The movie scrapes through the reclusive bondages of the real estate industry and exposes them like the gaze of the midnight. It is one of those movies where you root for the act and not the person. 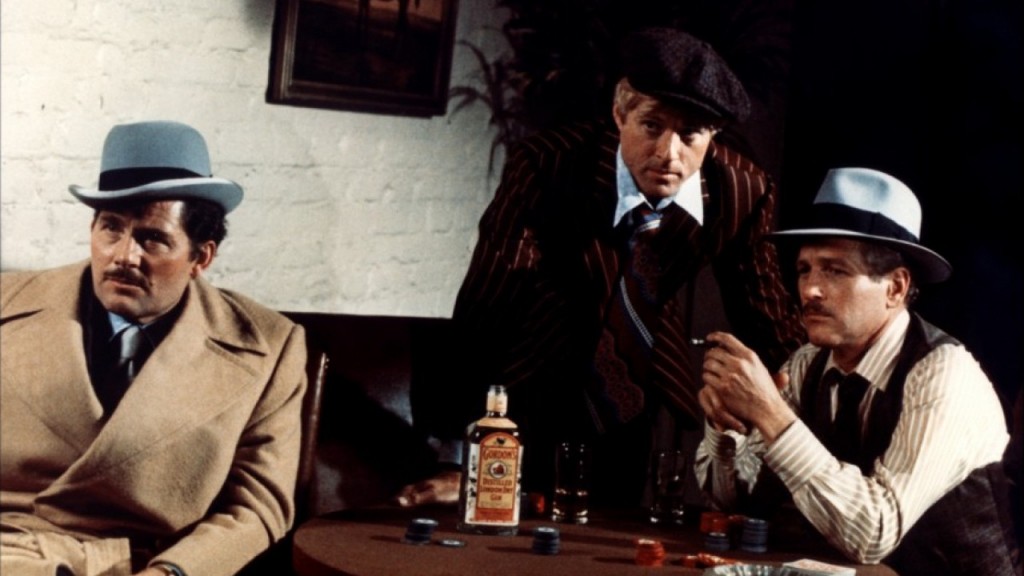 When the likes of Paul Newman and Robert Redford helm a movie, it is bound to jazz. The movie depicts a time of the great depression when a lot of people supposedly got into conning business men and crime bosses. It also leans in with the two protagonists trying to be done with conning after their One Last Con. The movie typically flashes scenes like a quiz show flashes question cards and then moulds the outlines not the storyline. The smoothness of Paul and manoeuvring of Robert has to be witnessed to realise the pulse of the movie. It is a typical con movie but what makes it special is the interlinking of the financial world and how Robert and Paul use the loopholes to smack it. The movie exudes a lot of research and had more than 25 PhD in finance working on the con. The cons are smart and gullible and makes for a very interesting watch. 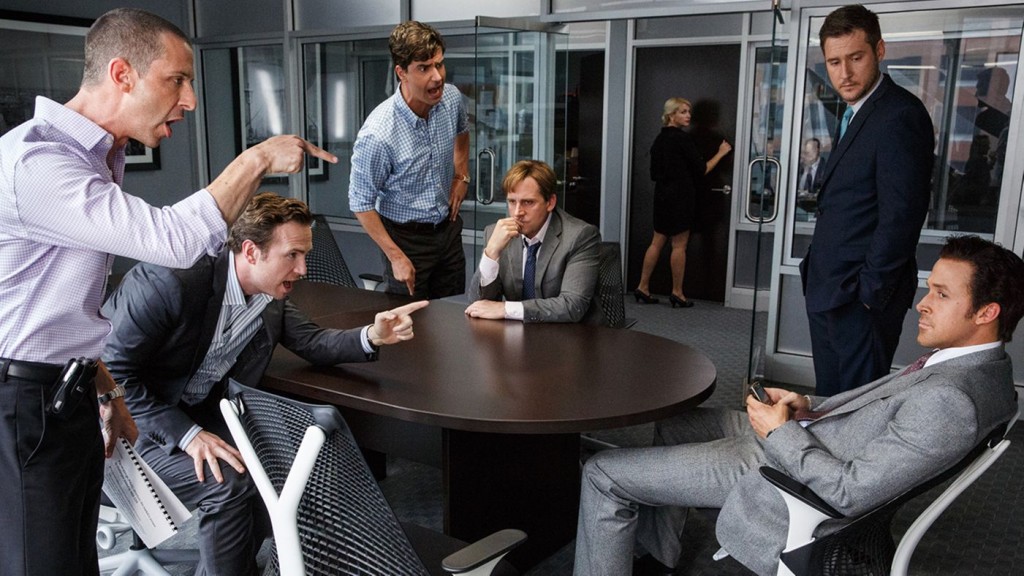 With a folly of brilliant actors, the movie enacts the blistering words of the finance pseudo guru “Michael Lewis”. The movie is based on his book which depicts the inconspicuous world of finance. It provokes a sense of unrest over the maze that numbers are and makes the audience realise the importance of the data dripping world. It heavily relies on the housing bubble as the pinch of its story, which subsequently makes us realise the impact the housing bubble had on the lives of Americans. There are so many movies, in their fitting genres that showcase the thump of the Housing bubble and its collapse. This movie reels onto the prediction of this collapse and the ways financial instruments make their say in the money market. The movie runs in its madness and laps you vying for breath. The movie is atrocious in its thought and hence makes for a breathtaking view. 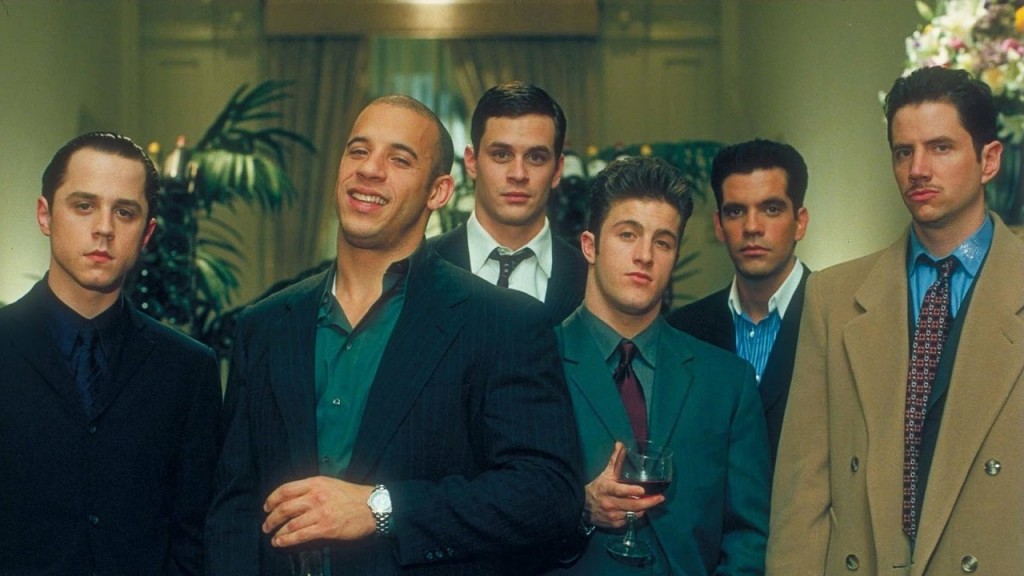 The movie doesn’t have anything that the audience haven’t seen before except Ben Affleck. He is ruthless and accommodating in the same breath. He carries the storyline on his shoulders and breathes life into some very ordinarily written scene. The movie is ingrained with the hustle of financial trading. It reveals the whole gamut of Chop stock where the brokers indulge in creating artificial demand in the stock of expired or fake companies, and speculative penny stocks. The father and son relationship is well weaved and makes for a great interplay. The movie is at this position only because of the fireworks of Ben Affleck. 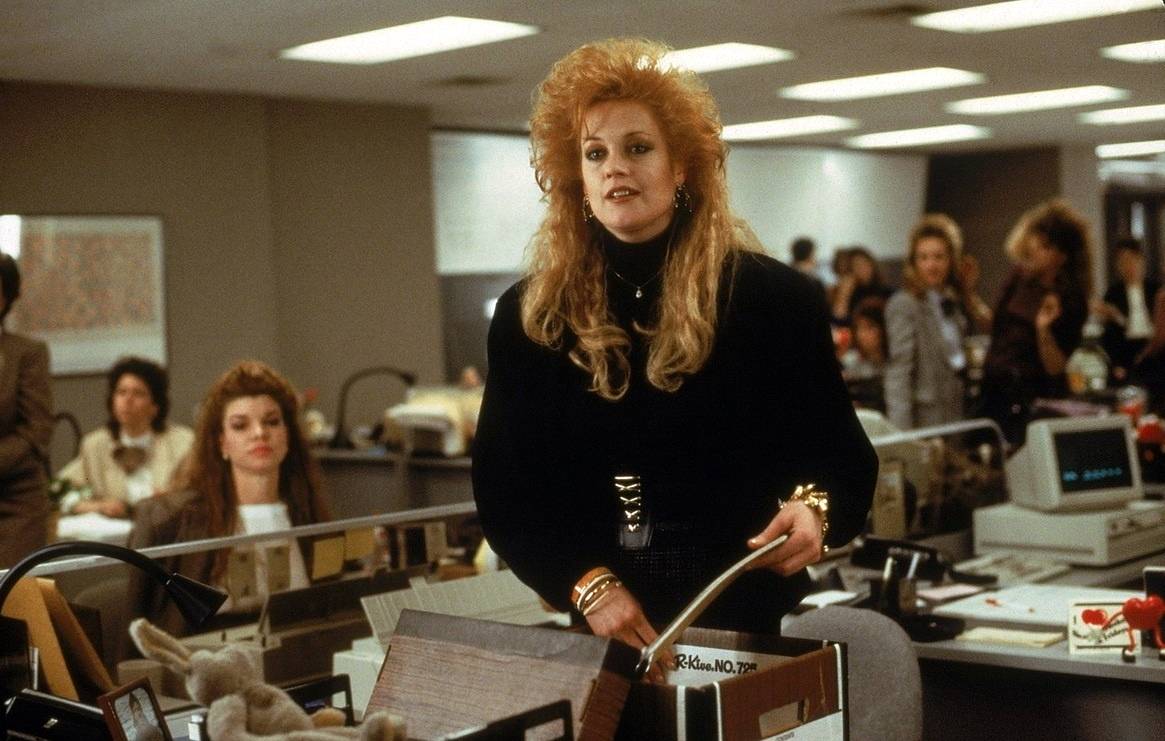 It needed the dexterity of Melanie Griffith to make it to a list dominated by heavy conundrum of men. The movie in its casing looks like a Rom Com where the girl amidst the identity crisis and confusion finds her Mr. Perfect. It is so much more. The movie deals with the intricacies of mergers and acquisitions and the ways it is dealt with. The movie traces the path of a girl trying to make it big in a world hummed by men and fighting tooth and nail for it. Working Girl in its propriety is a coming of age movie which gave the perspective that women can also rule the world of stock broking and it doesn’t announce that, it gives subtle hints to make it appetizing for the audience. 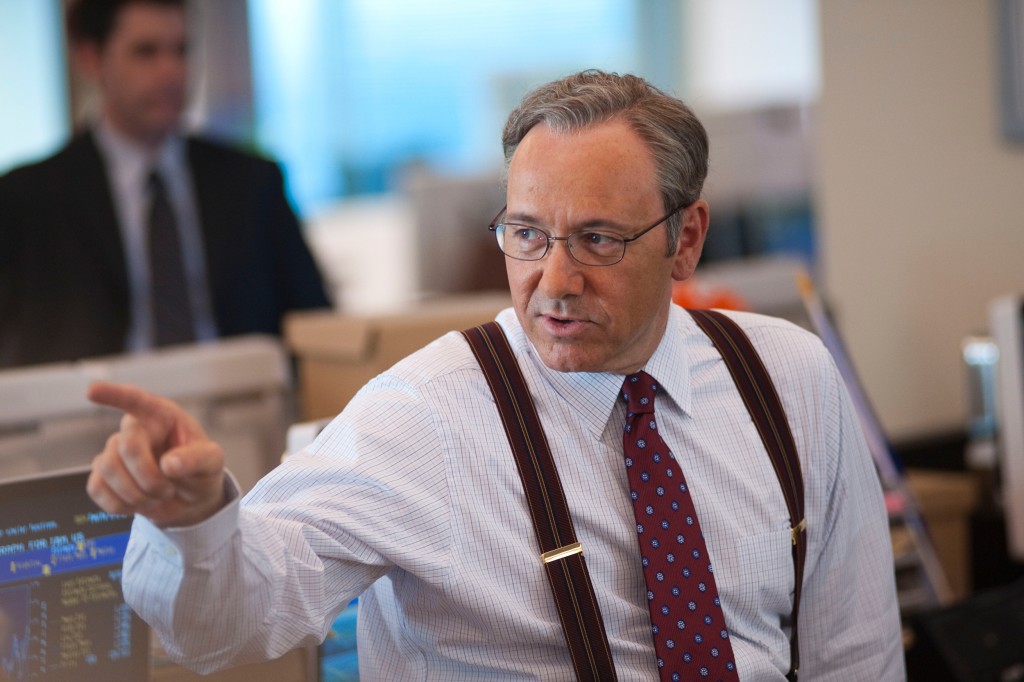 The movie is helmed by the notorious artist of the grey field – Kevin Spacey. He bottles down the financial crisis of 2007-08 in the clock of 36 hours. Bankruptcy, hits, millions shoved away, that is exactly how it all starts for Kevin Spacey as Sam Rodgers. The movie is filled with layers of suspense, Kevin brings in the drama to keep the hold of the suspense. The movie is filled with the rush of meetings, it is these meetings that span through the night that gives the adrenaline rush. It swindles every one and every one seems on a haze to get by. The director projects the turbulent life of Stockbroking. He lays down the fact that one wrong move and millions could simply cease to be. Kevin spacey claims money to be a monster but in the same breath also says that it is the fright of this monster that keep people going every single day. 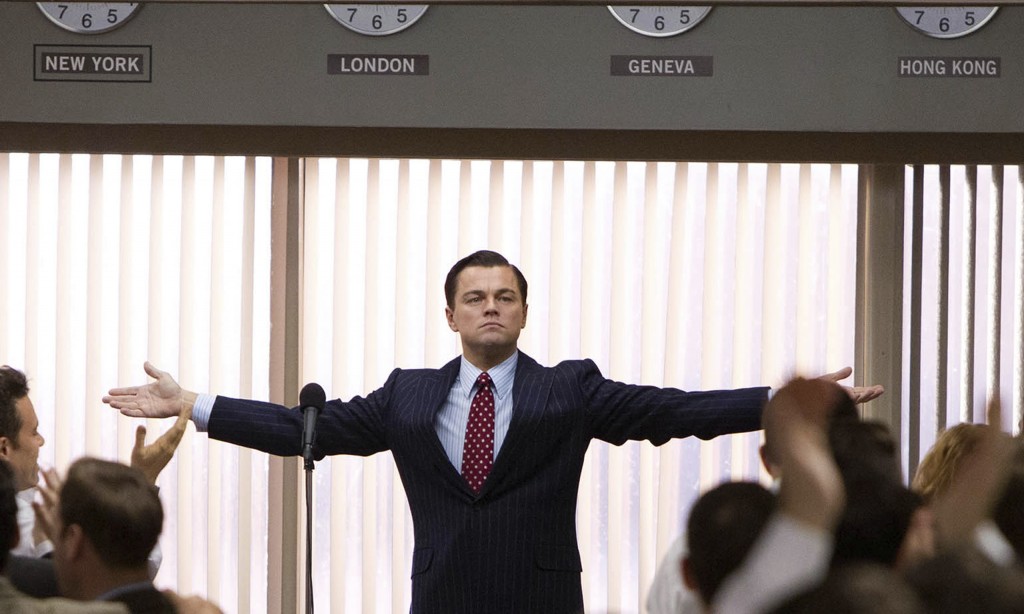 The movie is a Circus called Money. Every scene is a spectacle and Martin Scorsese makes sure it is nothing less. It is a riot of drugs and sex meddled in the world of money spinning and conning. The Wolf is Leonardo DiCaprio and he bites every scene exactly like that. It showcases the extravagant living of Jordan Belfort and those that tagged along with him. The movie is far beyond the right and way across the wrong. It is a fantasy that makes reality dance for a dime. Margot Robbie dazzles the scenes she whips in and Jonah Hill is a laugh riot. The movie is not about making money but is about what money makes out of people. The notion remains sarcastic and wild but delves a punch when the FBI makes Leo ride. For Leo is a showman and he does exactly that, Makes a spectacle. 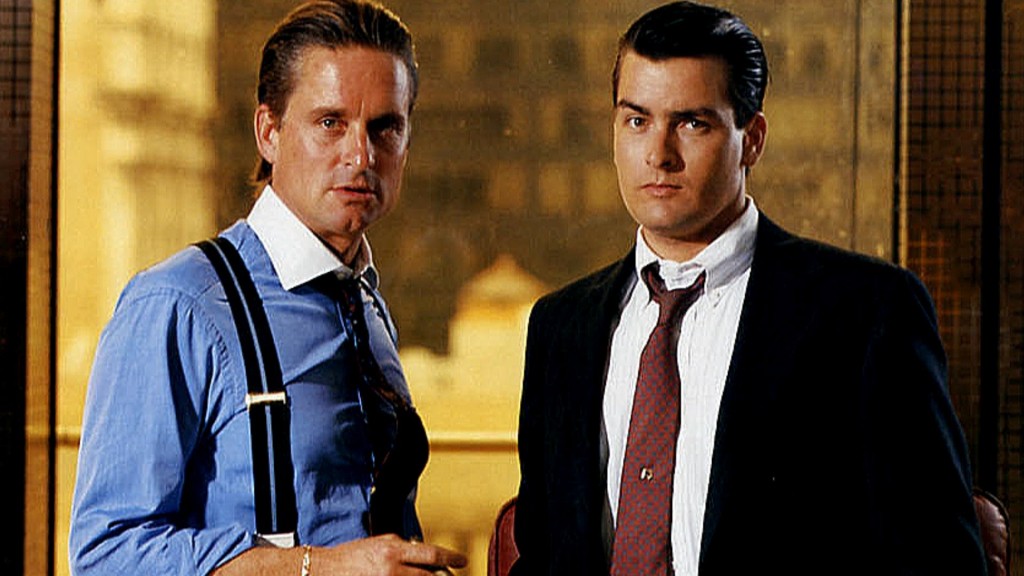 The reason this movie takes the  top prize is because it presents everything that is right and wrong about the world of money. Shot in the authentic cloches of Wall Street and Penthouses, it gives you the jolt of being a stock broker. It is an uncertain world and every step comes at a price. The movie announces the beauty of influence and power. The movie has a power house in the form of Michael Douglas and he delivers every scene. Charlie Sheen reacts well to every play and holds his own. The movie smears greed across the screen and makes the claim that ‘Greed is Good’. The movie doesn’t have a piece of monologue like that of Ben Affleck or Alec Baldwin. Yet it delivers for the notions that is scribed by Douglas. This movie is the leather case, so slick and smooth that eyes miss the veiled.